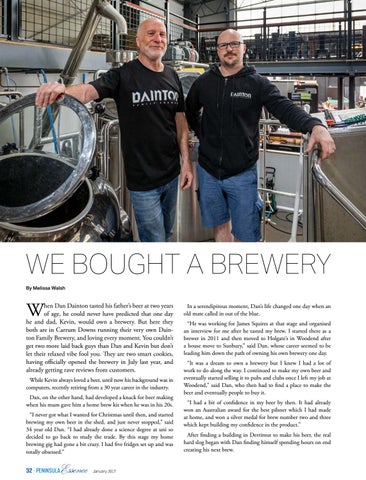 WE BOUGHT A BREWERY By Melissa Walsh

hen Dan Dainton tasted his father’s beer at two years of age, he could never have predicted that one day he and dad, Kevin, would own a brewery. But here they both are in Carrum Downs running their very own Dainton Family Brewery, and loving every moment. You couldn’t get two more laid back guys than Dan and Kevin but don’t let their relaxed vibe fool you. They are two smart cookies, having officially opened the brewery in July last year, and already getting rave reviews from customers. While Kevin always loved a beer, until now his background was in computers, recently retiring from a 30 year career in the industry. Dan, on the other hand, had developed a knack for beer making when his mum gave him a home brew kit when he was in his 20s. “I never got what I wanted for Christmas until then, and started brewing my own beer in the shed, and just never stopped,” said 34 year old Dan. “I had already done a science degree at uni so decided to go back to study the trade. By this stage my home brewing gig had gone a bit crazy. I had five fridges set up and was totally obsessed.”

In a serendipitous moment, Dan’s life changed one day when an old mate called in out of the blue. “He was working for James Squires at that stage and organised an interview for me after he tasted my brew. I started there as a brewer in 2011 and then moved to Holgate’s in Woodend after a house move to Sunbury,” said Dan, whose career seemed to be leading him down the path of owning his own brewery one day. “It was a dream to own a brewery but I knew I had a lot of work to do along the way. I continued to make my own beer and eventually started selling it to pubs and clubs once I left my job at Woodend,” said Dan, who then had to find a place to make the beer and eventually people to buy it. “I had a bit of confidence in my beer by then. It had already won an Australian award for the best pilsner which I had made at home, and won a silver medal for brew number two and three which kept building my confidence in the product.” After finding a building in Derrimut to make his beer, the real hard slog began with Dan finding himself spending hours on end creating his next brew.