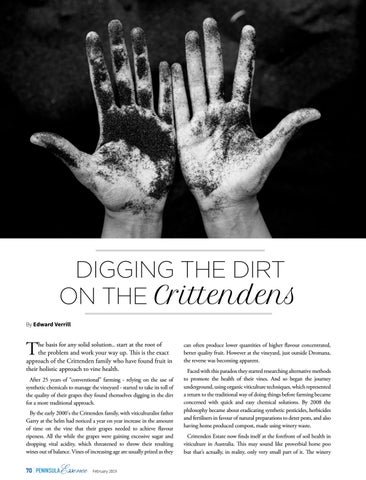 DIGGING THE DIRT ON THE Crittendens By Edward Verrill

he basis for any solid solution.. start at the root of the problem and work your way up. This is the exact approach of the Crittenden family who have found fruit in their holistic approach to vine health.

After 25 years of â&amp;#x20AC;&amp;#x153;conventionalâ&amp;#x20AC;? farming - relying on the use of synthetic chemicals to manage the vineyard - started to take its toll of the quality of their grapes they found themselves digging in the dirt for a more traditional approach. By the early 2000&#39;s the Crittenden family, with viticulturalist father Garry at the helm had noticed a year on year increase in the amount of time on the vine that their grapes needed to achieve flavour ripeness. All the while the grapes were gaining excessive sugar and dropping vital acidity, which threatened to throw their resulting wines out of balance. Vines of increasing age are usually prized as they

can often produce lower quantities of higher flavour concentrated, better quality fruit. However at the vineyard, just outside Dromana, the reverse was becoming apparent. Faced with this paradox they started researching alternative methods to promote the health of their vines. And so began the journey underground, using organic viticulture techniques, which represented a return to the traditional way of doing things before farming became concerned with quick and easy chemical solutions. By 2008 the philosophy became about eradicating synthetic pesticides, herbicides and fertilisers in favour of natural preparations to deter pests, and also having home produced compost, made using winery waste. Crittenden Estate now finds itself at the forefront of soil health in viticulture in Australia. This may sound like proverbial horse poo but thatâ&amp;#x20AC;&amp;#x2122;s actually, in reality, only very small part of it. The winery