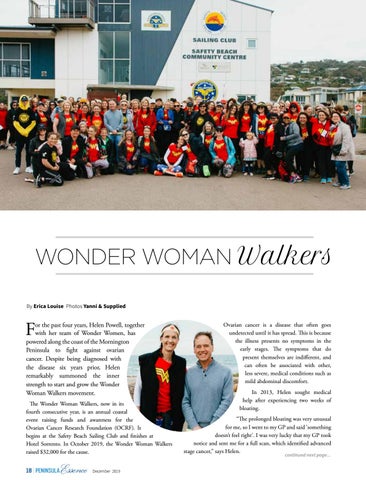 or the past four years, Helen Powell, together with her team of Wonder Women, has powered along the coast of the Mornington Peninsula to fight against ovarian cancer. Despite being diagnosed with the disease six years prior, Helen remarkably summoned the inner strength to start and grow the Wonder Woman Walkers movement.

The Wonder Woman Walkers, now in its fourth consecutive year, is an annual coastal event raising funds and awareness for the Ovarian Cancer Research Foundation (OCRF). It begins at the Safety Beach Sailing Club and finishes at Hotel Sorrento. In October 2019, the Wonder Woman Walkers raised $32,000 for the cause.

Ovarian cancer is a disease that often goes undetected until it has spread. This is because the illness presents no symptoms in the early stages. The symptoms that do present themselves are indifferent, and can often be associated with other, less severe, medical conditions such as mild abdominal discomfort. In 2013, Helen sought medical help after experiencing two weeks of bloating. “The prolonged bloating was very unusual for me, so I went to my GP and said &#39;something doesn’t feel right&#39;. I was very lucky that my GP took notice and sent me for a full scan, which identified advanced stage cancer,” says Helen. continued next page...