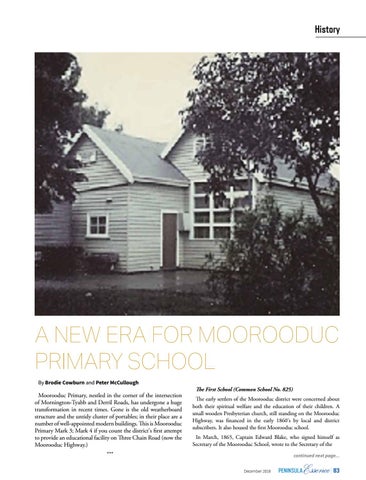 Moorooduc Primary, nestled in the corner of the intersection of Mornington-Tyabb and Derril Roads, has undergone a huge transformation in recent times. Gone is the old weatherboard structure and the untidy cluster of portables; in their place are a number of well-appointed modern buildings. This is Moorooduc Primary Mark 3; Mark 4 if you count the district&#39;s first attempt to provide an educational facility on Three Chain Road (now the Moorooduc Highway.)

The First School (Common School No. 825) The early settlers of the Moorooduc district were concerned about both their spiritual welfare and the education of their children. A small wooden Presbyterian church, still standing on the Moorooduc Highway, was financed in the early 1860&#39;s by local and district subscribers. It also housed the first Moorooduc school. In March, 1865, Captain Edward Blake, who signed himself as Secretary of the Moorooduc School, wrote to the Secretary of the