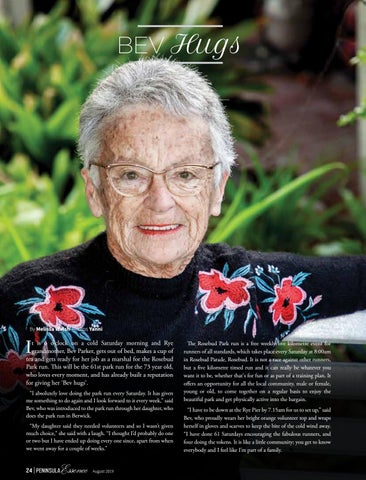 t is 6 o’clock on a cold Saturday morning and Rye grandmother, Bev Parker, gets out of bed, makes a cup of tea and gets ready for her job as a marshal for the Rosebud Park run. This will be the 61st park run for the 73 year old, who loves every moment, and has already built a reputation for giving her ‘Bev hugs’.

“I absolutely love doing the park run every Saturday. It has given me something to do again and I look forward to it every week,” said Bev, who was introduced to the park run through her daughter, who does the park run in Berwick. “My daughter said they needed volunteers and so I wasn’t given much choice,” she said with a laugh. “I thought I’d probably do one or two but I have ended up doing every one since, apart from when we went away for a couple of weeks.”

The Rosebud Park run is a free weekly five kilometre event for runners of all standards, which takes place every Saturday at 8:00am in Rosebud Parade, Rosebud. It is not a race against other runners, but a five kilometre timed run and it can really be whatever you want it to be, whether that's for fun or as part of a training plan. It offers an opportunity for all the local community, male or female, young or old, to come together on a regular basis to enjoy the beautiful park and get physically active into the bargain. “I have to be down at the Rye Pier by 7.15am for us to set up,” said Bev, who proudly wears her bright orange volunteer top and wraps herself in gloves and scarves to keep the bite of the cold wind away. “I have done 61 Saturdays encouraging the fabulous runners, and four doing the tokens. It is like a little community; you get to know everybody and I feel like I’m part of a family.