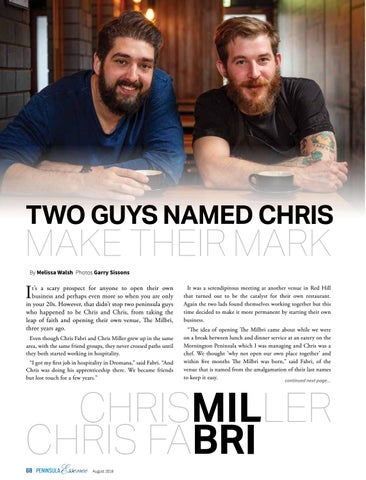 t’s a scary prospect for anyone to open their own business and perhaps even more so when you are only in your 20s. However, that didn’t stop two peninsula guys who happened to be Chris and Chris, from taking the leap of faith and opening their own venue, The Milbri, three years ago.

Even though Chris Fabri and Chris Miller grew up in the same area, with the same friend groups, they never crossed paths until they both started working in hospitality. “I got my first job in hospitality in Dromana,” said Fabri. “And Chris was doing his apprenticeship there. We became friends but lost touch for a few years.&quot;

It was a serendipitous meeting at another venue in Red Hill that turned out to be the catalyst for their own restaurant. Again the two lads found themselves working together but this time decided to make it more permanent by starting their own business. “The idea of opening The Milbri came about while we were on a break between lunch and dinner service at an eatery on the Mornington Peninsula which I was managing and Chris was a chef. We thought &#39;why not open our own place together&#39; and within five months The Milbri was born,” said Fabri, of the venue that is named from the amalgamation of their last names to keep it easy. continued next page...