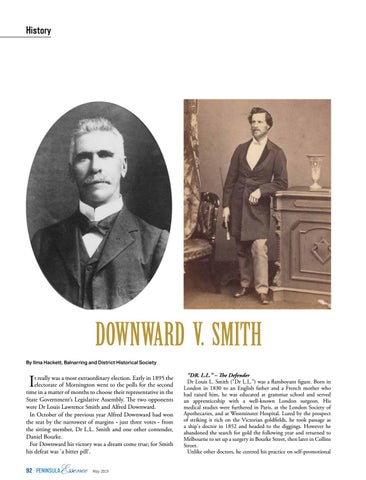 t really was a most extraordinary election. Early in 1895 the electorate of Mornington went to the polls for the second time in a matter of months to choose their representative in the State Government’s Legislative Assembly. The two opponents were Dr Louis Lawrence Smith and Alfred Downward. In October of the previous year Alfred Downward had won the seat by the narrowest of margins - just three votes - from the sitting member, Dr L.L. Smith and one other contender, Daniel Bourke. For Downward his victory was a dream come true; for Smith his defeat was 'a bitter pill'.

“DR. L.L.” – The Defender Dr Louis L. Smith ("Dr L.L.") was a flamboyant figure. Born in London in 1830 to an English father and a French mother who had raised him, he was educated at grammar school and served an apprenticeship with a well-known London surgeon. His medical studies were furthered in Paris, at the London Society of Apothecaries, and at Westminster Hospital. Lured by the prospect of striking it rich on the Victorian goldfields, he took passage as a ship's doctor in 1852 and headed to the diggings. However he abandoned the search for gold the following year and returned to Melbourne to set up a surgery in Bourke Street, then later in Collins Street. Unlike other doctors, he centred his practice on self-promotional