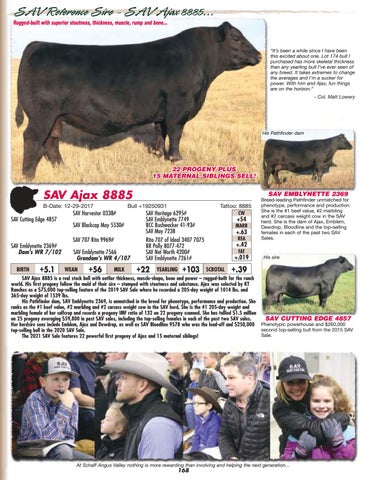 “It’s been a while since I have been this excited about one. Lot 174 bull I purchased has more skeletal thickness than any yearling bull I’ve ever seen of any breed. It takes extremes to change the averages and I’m a sucker for power. With him and Ajax, fun things are on the horizon.” - Col. Matt Lowery

Breed-leading Pathfinder unmatched for phenotype, performance and production. She is the #1 beef value, #2 marbling and #2 carcass weight cow in the SAV herd. She is the dam of Ajax, Emblem, Dewdrop, Bloodline and the top-selling females in each of the past two SAV Sales.

SAV Ajax 8885 is a real stock bull with outlier thickness, muscle-shape, bone and power – rugged-built for the ranch world. His first progeny follow the mold of their sire – stamped with stoutness and substance. Ajax was selected by KT Ranches as a $75,000 top-selling feature of the 2019 SAV Sale where he recorded a 205-day weight of 1014 lbs. and 365-day weight of 1539 lbs. His Pathfinder dam, SAV Emblynette 2369, is unmatched in the breed for phenotype, performance and production. She ranks as the #1 beef value, #2 marbling and #2 carcass weight cow in the SAV herd. She is the #1 205-day weight and marbling female of her calfcrop and records a progeny IMF ratio of 132 on 22 progeny scanned. She has tallied $1.5 million on 25 progeny averaging $59,800 in past SAV sales, including the top-selling females in each of the past two SAV sales. SAV CUTTING EDGE 4857 Her herdsire sons include Emblem, Ajax and Dewdrop, as well as SAV Bloodline 9578 who was the lead-off and $250,000 Phenotypic powerhouse and $260,000 second top-selling bull from the 2015 SAV top-selling bull in the 2020 SAV Sale. Sale. The 2021 SAV Sale features 22 powerful first progeny of Ajax and 15 maternal siblings!

At Schaff Angus Valley nothing is more rewarding than involving and helping the next generation... 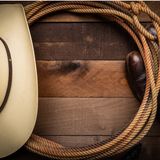