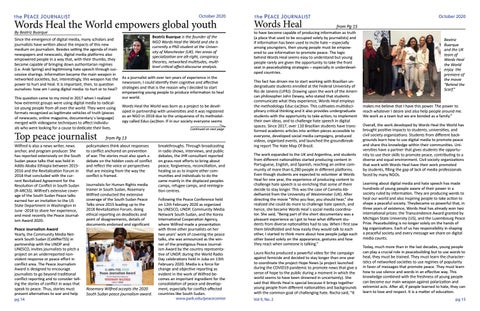 Beatriz Buarque is the founder of the NGO Words Heal the World and she is currently a PhD student at the University of Manchester (UK). Her areas of specialization are alt-right, conspiracy theories, networked multitudes, multilevel critical affect-discourse analysis.

Since the emergence of digital media, many scholars and journalists have written about the impacts of this new medium on journalism. Besides setting the agenda of main newspapers and newscasts, digital media platforms also empowered people in a way that, with their thumbs, they became capable of bringing down authoritarian regimes (i.e. Arab Spring) and legitimising hate speech through successive sharings. Information became the main weapon in networked societies, but, interestingly, this weapon has the As a journalist with over ten years of experience in the newsroom, I could identify their cognitive and affective power to hurt and heal. It is important, then, to question ourselves: how am I using digital media: to hurt or to heal? strategies and that is the reason why I decided to start empowering young people to produce information to heal our world. This question came to my mind in 2017 when I realized how extremist groups were using digital media to radicalWords Heal the World was born as a project to be develize young people from all over the world. They were using oped in partnership with universities and it was registered formats recognized as legitimate vehicles of truth (pieces as an NGO in 2018 due to the uniqueness of its methodolof newscasts, online magazine, documentary´s language) ogy called Educ-(ac)tion. If in our society everyone seems merged with videogame techniques to affect individuals who were looking for a cause to dedicate their lives. Continued on next page

Top peace journalist Wilfred is also a news writer, news anchor, and program producer. She has reported extensively on the South Sudan peace talks that was held in Addis Ababa Ethiopia between 20152016 and the Revitalization Forum in 2018 that concluded with the current Revitalized Agreement for the Resolution of Conflict in South Sudan (R-ARCSS). Wilfred’s extensive coverage of the South Sudan Peace talks earned her an invitation to the US State Department in Washington in June -2018 to share her experience, and most recently the Peace Journalism Award 2020. Peace Journalism Award Yearly, the Community Media Network South Sudan (CoMNeTSS) in partnership with the UNDP and UNESCO, invites journalists to pitch a project on an underreported nonviolent response or peace effort in conflict area. The Peace Journalism Award is designed to encourage journalists to go beyond traditional conflict reporting and to consider telling the stories of conflict in ways that speak to peace. Thus, stories must present alternatives to war and help pg 14

policymakers think about responses to conflict anchored on prevention of war. The stories must also spark a debate on the hidden costs of conflict and reflect the voice or perspectives that are missing from the way the conflict is framed. Journalists for Human Rights media trainer in South Sudan, Rosemary Wilfred conducted the extensive coverage of the South Sudan Peace Talks since 2015 leading up to the 2018 Revitalization Forum, doing ethical reporting on deadlocks and point of disagreements, details of documents endorsed and significant

breakthroughs. Through broadcasting in radio shows, interviews, and public debates, the JHR consultant reported on grass-root efforts to bring about peace, forgiveness, reconciliation, and healing so as to inspire other communities and individuals to do the same mainly in the displaced peoples camps, refugee camps, and reintegration centres. Following the Peace Conference held on 12th February 2020 as organized by UNESCO, UNDP, Community Media Network South Sudan, and the Korea International Cooperation Agency, where Wilfred made a presentation with three other journalists on her two years’ work of covering the peace talks, she was announced as the winner of the prestigious Peace Journalism Award by the country representative of UNDP, during the World Radio Day celebrations held in Juba on 13th February 2020. Media is a force for change and objective reporting as evident in the work of Wilfred becomes an important ingredient for the consolidation of peace and development, especially for conflict-affected countries like South Sudan. www.park.edu/peacecenter

to have become capable of producing information as truth (a place that used to be occupied solely by journalists) and if information has been used to incite hate – especially among youngsters, then young people must be empowered to use information to promote peace. The logic behind Words Heal seems easy to understand but young people rarely are given the opportunity to take the front seat in peacebuilding strategies – especially in underdeveloped countries. This fact has driven me to start working with Brazilian undergraduate students enrolled at the Federal University of Rio de Janeiro (UFRJ). Drawing upon the work of the American philosopher John Dewey, who stated that students communicate what they experience, Words Heal employs the methodology Educ-(ac)tion. This cultivates multidisciplinary critical thinking and it also provides undergraduate students with the opportunity to take action, to implement their own ideas, and to challenge hate speech in digital spaces. Since 2017, over 110 Brazilian students have transformed academic articles into written pieces accessible to everyone, developed social media campaigns, produced videos, organised events, and launched the groundbreaking report The Hate Map Of Brazil. The work expanded to the UK and Argentina, and students from different nationalities started producing content in Portuguese, English, and Spanish, reaching an online community of more than 6,280 people in different platforms. Even though students are expected to volunteer at Words Heal for one year, the experience of producing content to challenge hate speech is so enriching that some of them decide to stay longer. This was the case of Camelia Abdelhamid from the University of Westminster (UK). After directing the movie “Who you fear, you should hear,” she realized she could do more to challenge hate speech, and hence, she became Words Heal´s social media coordinator. She said, “Being part of the short documentary was a pleasant experience as I got to hear what different students from diverse nationalities had to say. When I first saw them blindfolded and how easily they would talk to each other, I started to think more about how people judge each other based solely on the appearance, gestures and how they react when someone is talking.” Laura Rocha produced a powerful video for the campaign against femicide and decided to stay longer than one year to coordinate the project Hope News (a project launched during the COVID19 pandemic to promote news that give a sense of hope to the public during a moment in which the world seems to have been drowned in uncertainty). She said that Words Heal is special because it brings together young people from different nationalities and backgrounds with the common goal of challenging hate. Rocha said, “It Vol 9, No. 2

Beatriz Buarque and the UK team of Words Heal the World enjoy the premiere of the movie “Behind the Scarf.”

makes me believe that I have this power. The power to reach whatever I desire and also help people around me. We work as a team but we are bonded as a family.” Overall, the work developed by Words Heal the World has brought positive impacts to students, universities, and civil society organizations. Students from different backgrounds learn how to use digital media to promote peace and share this knowledge within their communities. Universities have a partner that gives students the opportunity to use their skills to promote peace, contributing to a diverse and equal environment. Civil society organizations that work with Words Heal have their work promoted by students, filling the gap of lack of media professionals faced by many NGOs. Learning about digital media and hate speech has made hundreds of young people aware of their power in a society ruled by information. They are producing words to heal our world and also inspiring people to take action to shape a peaceful society. Theybecame so powerful that, in three years of existence, Words Heal has already won two international prizes: the Transcendence Award granted by Michigan State University (US), and the Luxembourg Peace Prize. Peacebuilding is no longer solely on the hands of big organizations. Each of us has responsibility in shaping a peaceful society and every message we share on digital media counts. Today, much more than in the last decades, young people can play a crucial role in peacebuilding but to use words to heal, they must be trained. They must learn the characteristics of networked societies to use regimes of popularity in favor of messages that promote peace. They must learn how to use silence and words in an effective way. This knowledge combined with the freshness of young people can become our main weapon against polarization and extremist acts. After all, if people learned to hate, they can learn to love and respect. It is a matter of education. pg 15 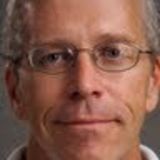