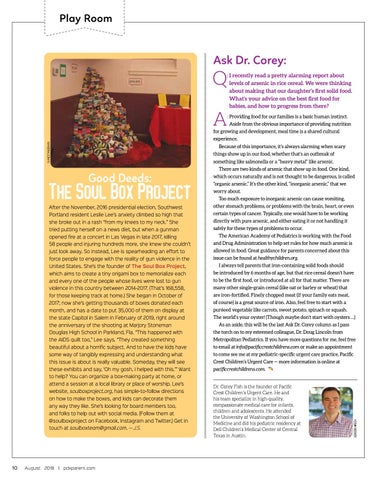 : I recently read a pretty alarming report about

levels of arsenic in rice cereal. We were thinking about making that our daughter’s first solid food. What’s your advice on the best first food for babies, and how to progress from there? : Providing food for our families is a basic human instinct.

Aside from the obvious importance of providing nutrition for growing and development, meal time is a shared cultural experience.

The Soul Box Project After the November, 2016 presidential election, Southwest Portland resident Leslie Lee’s anxiety climbed so high that she broke out in a rash “from my knees to my neck.” She tried putting herself on a news diet, but when a gunman opened fire at a concert in Las Vegas in late 2017, killing 58 people and injuring hundreds more, she knew she couldn’t just look away. So instead, Lee is spearheading an effort to force people to engage with the reality of gun violence in the United States. She’s the founder of The Soul Box Project, which aims to create a tiny origami box to memorialize each and every one of the people whose lives were lost to gun violence in this country between 2014-2017. (That’s 168,558, for those keeping track at home.) She began in October of 2017; now she’s getting thousands of boxes donated each month, and has a date to put 35,000 of them on display at the state Capitol in Salem in February of 2019, right around the anniversary of the shooting at Marjory Stoneman Douglas High School in Parkland, Fla. “This happened with the AIDS quilt too,” Lee says. “They created something beautiful about a horrific subject. And to have the kids have some way of tangibly expressing and understanding what this issue is about is really valuable. Someday, they will see these exhibits and say, ‘Oh my gosh, I helped with this.’” Want

Because of this importance, it’s always alarming when scary things show up in our food, whether that’s an outbreak of something like salmonella or a “heavy metal” like arsenic. There are two kinds of arsenic that show up in food. One kind, which occurs naturally and is not thought to be dangerous, is called “organic arsenic.” It’s the other kind, “inorganic arsenic,” that we worry about. Too much exposure to inorganic arsenic can cause vomiting, other stomach problems, or problems with the brain, heart, or even certain types of cancer. Typically, one would have to be working directly with pure arsenic, and either eating it or not handling it safely for these types of problems to occur. The American Academy of Pediatrics is working with the Food and Drug Administration to help set rules for how much arsenic is allowed in food. Great guidance for parents concerned about this issue can be found at healthychildren.org. I always tell parents that iron-containing solid foods should be introduced by 6 months of age, but that rice cereal doesn’t have to be the first food, or introduced at all for that matter. There are many other single-grain cereal (like oat or barley or wheat) that are iron-fortified. Finely chopped meat (if your family eats meat, of course) is a great source of iron. Also, feel free to start with a puréeed vegetable like carrots, sweet potato, spinach or squash. The world’s your oyster! (Though maybe don’t start with oysters …) As an aside, this will be the last Ask Dr. Corey column as I pass the torch on to my esteemed colleague, Dr. Doug Lincoln from Metropolitan Pediatrics. If you have more questions for me, feel free to email at info@pacificcrestchildrens.com or make an appointment to come see me at my pediatric-specific urgent care practice, Pacific Crest Children’s Urgent Care — more information is online at pacificcrestchildrens.com.

Dr. Corey Fish is the founder of Pacific Crest Children’s Urgent Care. He and his team specialize in high-quality, compassionate medical care for infants, children and adolescents. He attended the University of Washington School of Medicine and did his pediatric residency at Dell Children’s Medical Center of Central Texas in Austin.

to help? You can organize a box-making party at home, or attend a session at a local library or place of worship. Lee’s

Our back-to-school issue features a look at inequities in after-school programming and a deep-dive into what school looks like on either side of the Columbia River. Plus, taking kids to the ballgame during the last few, precious weeks of summer, a sweet wind chime craft, and healthy breakfast cookies for school mornings, and our after-school program listings. 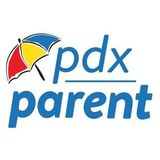