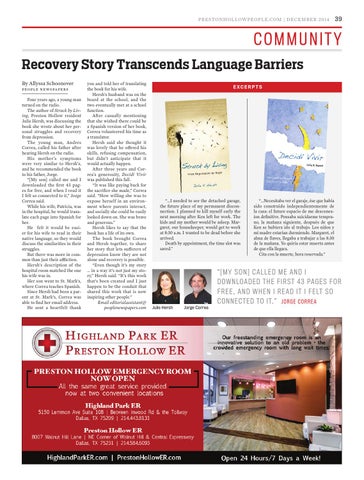 Four years ago, a young man turned on the radio. The author of Struck by Living, Preston Hollow resident Julie Hersh, was discussing the book she wrote about her personal struggles and recovery from depression. The young man, Andres Correa, called his father after hearing Hersh on the radio. His mother’s symptoms were very similar to Hersh’s, and he recommended the book to his father, Jorge. “[My son] called me and I downloaded the first 43 pages for free, and when I read it I felt so connected to it,” Jorge Correa said. While his wife, Patricia, was in the hospital, he would translate each page into Spanish for her. He felt it would be easier for his wife to read in their native language, so they would discuss the similarities in their struggles. But there was more in common than just their affliction. Hersh’s description of the hospital room matched the one his wife was in. Her son went to St. Mark’s, where Correa teaches Spanish. Since Hersh had been a parent at St. Mark’s, Correa was able to find her email address. He sent a heartfelt thank

you and told her of translating the book for his wife. Hersh’s husband was on the board at the school, and the two eventually met at a school function. After casually mentioning that she wished there could be a Spanish version of her book, Correa volunteered his time as a translator. Hersh said she thought it was lovely that he offered his skills, refusing compensation, but didn’t anticipate that it would actually happen. After three years and Correa’s generosity, Decidi Vivir was published this fall. “It was like paying back for the sacrifice she made,” Correa said. “How willing she was to expose herself in an environment where parents interact, and socially she could be easily looked down on. She was brave and generous.” Hersh likes to say that the book has a life of its own. The book brought Correa and Hersh together, to share her story that lets sufferers of depression know they are not alone and recovery is possible. “Even though it’s my story … in a way it’s not just my story,” Hersh said. “It’s this work that’s been created and I just happen to be the conduit that shared this work that is now inspiring other people.” Email editorialassistant@ peoplenewspapers.com

“…I needed to see the detached garage, the future place of my permanent disconnection. I planned to kill myself early the next morning after Ken left for work. The kids and my mother would be asleep. Margaret, our housekeeper, would get to work at 8:30 a.m. I wanted to be dead before she arrived. Death by appointment, the time slot was saved.”

Preston Hollow People is a monthly production of People Newspapers in Dallas, Texas. If you're interested in advertising with us, email advertising@peoplenewspapers.com. 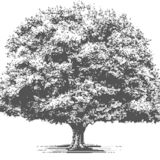