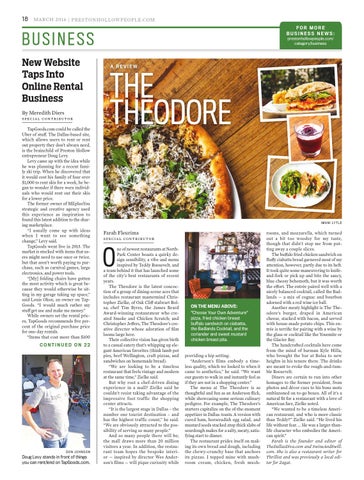 Special Contributor TapGoods.com could be called the Uber of stuff. The Dallas-based site, which allows users to rent or rent out property they don’t always need, is the brainchild of Preston Hollow entrepreneur Doug Levy. Levy came up with the idea while he was planning for a recent family ski trip. When he discovered that it would cost his family of four over $1,000 to rent skis for a week, he began to wonder if there were individuals who would rent out their skis for a lower price. The former owner of MEplusYou strategic and creative agency used this experience as inspiration to found this latest addition to the sharing marketplace. “I usually come up with ideas when I want to see something change,” Levy said. TapGoods went live in 2015. The market is stocked with items that users might need to use once or twice, but that aren’t worth paying to purchase, such as carnival games, large electronics, and power tools. “[My] folding chairs have gotten the most activity which is great because they would otherwise be sitting in my garage taking up space,” said Louis Okon, an owner on TapGoods. “I would much rather my stuff get use and make me money.” While owners set the rental prices, TapGoods recommends five percent of the original purchase price for one-day rentals. “Items that cost more than $100

Doug Levy stands in front of things you can rent/lend on TapGoods.com.

ne of newest restaurants at NorthPark Center boasts a quirky design sensibility, a vibe and menu inspired by Teddy Roosevelt, and a team behind it that has launched some of the city’s best restaurants of recent years. The Theodore is the latest concoction of a group of dining-scene aces that includes restaurant mastermind Christopher Zielke, of Oak Cliff stalwart Bolsa; chef Tim Byres, the James Beard Award-winning restaurateur who created Smoke and Chicken Scratch; and Christopher Jeffers, The Theodore’s creative director whose adoration of film looms large here. Their collective vision has given birth to a casual eatery that’s whipping up elegant American favorites (think lamb pot pies, beef Wellington, craft pizzas, and sandwiches on homemade bread). “We are looking to be a timeless restaurant that feels vintage and modern at the same time,” Zielke said. But why root a chef-driven dining experience in a mall? Zielke said he couldn’t resist taking advantage of the impressive foot traffic the shopping center attracts. “It is the largest stage in Dallas – the number one tourist destination – and has the highest traffic count,” he said. “We are obviously attracted to the possibility of serving so many people.” And so many people there will be; the mall draws more than 20 million visitors a year. In addition, the restaurant team hopes the bespoke interior — inspired by director Wes Anderson’s films — will pique curiosity while

ON THE MENU ABOVE: "Choose Your Own Adventure" pizza, fried chicken breast buffalo sandwich on ciabatta, the Badlands Cocktail, and the coriander and sweet mustard chicken breast pita. providing a hip setting. “Anderson’s films embody a timeless quality, which we looked to when it came to aesthetics,” he said. “We want our guests to walk in and instantly feel as if they are not in a shopping center.” The menu at The Theodore is as thoughtful and fun as an Anderson flick, while showcasing some serious culinary pedigree. For example, The Theodore’s starters capitalize on the of-the-moment appetizer in Dallas: toasts. A version with cured ham, horseradish egg salad, and mustard seeds stacked atop thick slabs of sourdough makes for a salty, meaty, satisfying start to dinner. The restaurant prides itself on making its own bread and dough, including the chewy-crunchy base that anchors its pizzas. I topped mine with mushroom cream, chicken, fresh mush-

rooms, and mozzarella, which turned out a bit too woodsy for my taste, though that didn’t stop me from putting away a couple slices. The buffalo fried chicken sandwich on fluffy ciabatta bread garnered most of my attention, however, partly due to its heft. It took quite some maneuvering to knifeand-fork or pick up and bite the saucy, blue cheesy behemoth, but it was worth the effort. The entrée paired well with a nicely balanced cocktail, called the Badlands — a mix of cognac and bourbon adorned with a red wine ice ball. Another meaty highlight is The Theodore’s burger, draped in American cheese, stacked with bacon, and served with house-made potato chips. This entrée is terrific for pairing with a wine by the glass or cocktail like the Yosemite or the Glacier Bay. The handcrafted cocktails here come from the mind of barman Kyle Hilla, who brought the bar at Bolsa to new heights in his tenure there. The drinks are meant to evoke the rough-and-tumble Roosevelt. Diners are certain to run into other homages to the former president, from photos and décor cues to his bons mots emblazoned on to-go boxes. All of it’s a natural fit for a restaurant with a love of American fare, Zielke noted. “We wanted to be a timeless American restaurant, and who is more classic than Teddy?” Zielke said. “He lived his life without fear. … He was a larger-thanlife character who embodies the American spirit.” Farah is the founder and editor of TheDallasDiva.com and SwineAndSwill. com. She is also a restaurant writer for Thrillist and was previously a local editor for Zagat.