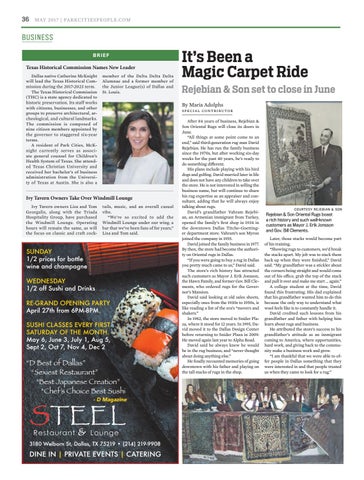 Texas Historical Commission Names New Leader Dallas native Catherine McKnight will lead the Texas Historical Commission during the 2017-2023 term. The Texas Historical Commission (THC) is a state agency dedicated to historic preservation. Its staff works with citizens, businesses, and other groups to preserve architectural, archeological, and cultural landmarks. The commission is composed of nine citizen members appointed by the governor to staggered six-year terms. A resident of Park Cities, McKnight currently serves as associate general counsel for Children’s Health System of Texas. She attended Texas Christian University and received her bachelor’s of business administration from the University of Texas at Austin. She is also a

Rejebian & Son set to close in June By Maria Adolphs

Ivy Tavern Owners Take Over Windmill Lounge Ivy Tavern owners Lisa and Tom Georgalis, along with the Triada Hospitality Group, have purchased the Windmill Lounge. Operating hours will remain the same, as will the focus on classic and craft cock-

It’s Been a Magic Carpet Ride

tails, music, and an overall casual vibe. “We’re so excited to add the Windmill Lounge under our wing, a bar that we’ve been fans of for years,” Lisa and Tom said.

After 84 years of business, Rejebian & Son Oriental Rugs will close its doors in June. “All things at some point come to an end,” said third-generation rug man David Rejebian. He has run the family business since the 1970s, but after working six-day weeks for the past 40 years, he’s ready to do something different. His plans include playing with his bird dogs and golfing. David married later in life and does not have any children to take over the store. He is not interested in selling the business name, but will continue to share his rug expertise as an appraiser and consultant, adding that he will always enjoy talking about rugs. David’s grandfather Vahram Rejebian, an Armenian immigrant from Turkey, opened the family’s first shop in 1934 in the downtown Dallas Titche-Goettinger department store. Vahram’s son Myron joined the company in 1955. David joined the family business in 1977. By then, the store had become the authority on Oriental rugs in Dallas. “If you were going to buy a rug in Dallas you pretty much came to us,” David said. The store’s rich history has attracted such customers as Mayor J. Erik Jonsson, the Hawn Family, and former Gov. Bill Clements, who ordered rugs for the Governor’s Mansion. David said looking at old sales sheets, especially ones from the 1930s to 1950s, is like reading a list of the era’s “movers and shakers.” In 1982, the store moved to Snider Plaza, where it stood for 12 years. In 1995, David moved it to the Dallas Design Center before returning to Snider Plaza in 2009. He moved again last year to Alpha Road. David said he always knew he would be in the rug business, and “never thought about doing anything else.” He fondly recounted memories of going downtown with his father and playing on the tall stacks of rugs in the shop.

Rejebian & Son Oriental Rugs boast a rich history and such well-known customers as Mayor J. Erik Jonsson and Gov. Bill Clements. Later, those stacks would become part of his training. “Showing rugs to customers, we’d break the stacks apart. My job was to stack them back up when they were finished,” David said. “My grandfather was a stickler about the corners being straight and would come out of his office, grab the top of the stack and pull it over and make me start … again.” A college student at the time, David found this frustrating. His dad explained that his grandfather wanted him to do this because the only way to understand what wool feels like is to constantly handle it. David credited such lessons from his grandfather and father with helping him learn about rugs and business. He attributed the store’s success to his grandfather’s attitude as an immigrant coming to America, where opportunities, hard work, and giving back to the community make a business work and grow. “I am thankful that we were able to offer people in Dallas something that they were interested in and that people trusted us when they came to look for a rug.”