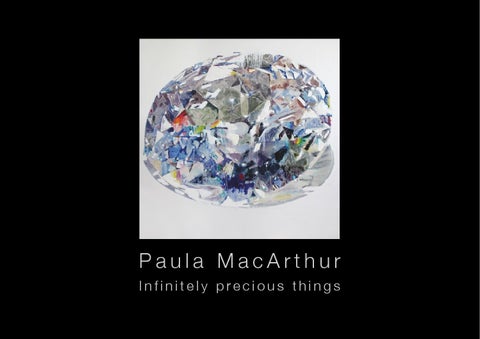 First published in 2014 by Paula MacArthur www.paula-macarthur.com All rights reserved. No part of this publication may be reproduced, stored in a retrieval system or transmitted in any form or by means electrical, mechanical or otherwise, without first seeking the permission of the copyright holder to be obtained from Paula MacArthur. Copyright ÂŠ2014 Paula MacArthur Cover: There are problems in these times Oil on canvas 140 x 140cm 2013

"Life, like a dome of many-coloured glass, Stains the white radiance of eternity, Until Death tramples it to fragments." Adonais by Percy Bysshe Shelley written upon the death of John Keats in 1821.

Paula MacArthur's paintings are a testimony to the primacy of vision. Light is not only the subject matter and content of Paula MacArthur's luminous and rather exquisite paintings but it's also their medium. Paula's paintings draw us into the now. For most of us; light can be many things, but for Paula; it's a celebration of the senses and an affirmation of values. This isn't simply a celebration of light but of life. The key to this sort of achievement is transformation. This is one of the principle elements that distinguish painting from illustration. This is the transformation from paint into light and space. A kind of latter day alchemy. Paula's paintings demonstrate that to paint about love - you have to paint lovingly; otherwise simply depicting acts of tenderness becomes illustration. It's no coincidence that Paula employs a method that eschews easy and mannered expressionistic rhetoric. Her recent work is closer in method to the meticulous paintings of Chuck Close. For her a sense of precision is essential. Light not only functions as space in painting but it can also lend the painting, what has been described as 'air'. Air in this context is the imagined space in which events 'unfold'. This is space as light and light as space. This is pictorial space; indeterminate and fictitious. This is the legacy of cubism. Paula also employs reflection and refraction to compress several shattered and partial spaces into one fictitious 'event'. Diamonds are complex and contradictory objects. There are few artefacts that are as demonised and fetishised as diamonds. Fewer still are as intimately bound to ideas of

transformation and energy. The list of diamond's distant and not-so-distant 'cousins' is impressive. Whether it be a life forms like us; a sack of coal or a stick of graphite. Diamonds represent a massive contradiction and like fire, they have the potential to be both fascinating and dangerous. Simultaneously beguiling and deadly.

Whenever I look at images of diamonds, I can't help but think about issues of affluence and poverty. Hatton Garden is a street distinguished only by security grills and litter; very Basildon. There's also the constant round of tabloid representations of Knightsbridge for the hard of thinking. And there's the rather tawdry dystopia that is reality TV. Shows which are epitomised by ITV2's 'The Only Way is Essex' , which for those of you who've been trapped in Antarctica recently, features talkative, narcissistic twenty-somethings banging on about shopping. They appear affluent and oblivious. Theirs is a celebration of conspicuous consumption. The wider world doesn't exist. The Edward Snowdens of this world need not apply. In 1960 Roy Lichtenstein painted 'The Ring'. Lichtenstein based his painting on a black and white advert for a 'budget' diamond engagement ring, so we mustn't loose sight of the fact that he didn't subsequently paint a diamond ring. He painted an image of an advertisement for an engagement ring, which is a very different matter. This is subsequently reflected in the work of Gerhard Richter. In Richter's paintings its the photograph rather than the image that is the subject. Second order meaning. The epitome of this culture of representation and misrepresentation has to be the rather creepy adverts for the diamond mining company de Beers. These adverts hark back to the world of Ian Fleming and James Bond. A world of second rate fiction. There's no mention of the 'taint' that colours the reputation of diamonds. In the 1960's Liz Taylor and Richard Burton's shopping trips kept tabloid newspapers supplied with anecdotes which invariably involved pornographic descriptions of a 'million dollar diamond'. Then there's the nightmare world of child soldiers and 'blood' diamonds. It's almost impossible to regard diamonds in an aesthetic or aspirational manner without appearing to have amnesia.

Light is synonymous with life. Which is probably why we take it for granted and why trying to comprehend light is almost impossible. It's rather like asking a fish what they think of water. Or more absurdly; whether they 'like' it.

"I'd rather have roses on my table, than diamonds round my neck" - Emma Goldman

When I think of light and luminosity, I'm overcome by a sense of well-being. Something like happiness. In the same moment I begin to visualise Newton et al, at the height of the enlightenment, experimenting with prisms and mirrors. Splitting light; even the expression sounds heroic. Paula's is a new world of reflection and refraction. Not for her the lazy and rhetorical conventions of expressionism. As they now seem dated and absurd. Luminosity in painting is invariably absent from spontaneous or expressionistic painting. This is because painting in an expressionistic manner can't accommodate the rather systemic method of painting necessary to construct luminosity and transparency. For a painting to be luminous the pigment has to be suspended or partially dispersed, not saturated. This can only be undertaken in a considered and methodical manner. Even using white becomes problematic.

"I'm a dirt person. I trust the dirt. I don't trust diamonds and gold" - Eartha Kitt

The paintings of Paula MacArthur depict cut diamonds; but in such a manner that they appear to employ a cubist space. Paula's method of depiction relies upon transparency and indeterminacy; both apparent and poetic. This is close to the idea of the 'crazy diamond'* that Pink Floyd sang about. The idea of 'shining on' being synonymous with inspiration and vision. Paula's paintings embrace and celebrate the 'primacy of vision'. For too long painters have allowed narrators to 'account' for their work. Paula's subject matter is also a vehicle for content which is light - relayed through light. Aldous Huxley in one of his many essays draws

a striking parallel between the cutting and finishing of gem stones and the potential of painting to 'split light'. He singles these two activities out as they both (in the right hands) seem to be able to 'fashion' nature - or more correctly light. This is what Suzi Gablik would later refer to in her 1995 book as the re-enchantment of art. For Paula this has meant employing characteristics that are intrinsically painterly and unique to painting. Something that would, I'm sure, have earned Clement Greenberg'sยน approval.

If Huxley had lived longer he might have added the cathode ray tube, television and the computer screen. Luminosity isn't the same thing as bright or colourful. It's about energy and life. The kind of life we occasionally glimpse in direct sunlight and the kind of light we can imagine. The 'light at the end of the tunnel' as 'Half Man, Half Biscuit' claim turns out to be the light of an oncoming train that'll eventually maim and kill you. Luminosity is the sense that an object is a source of light not merely a reflector. Most paintings until the mid/late 19th century appeared to exude light. Modernism's focus upon the 'thing itself' meant that many established aspects of painting had come to be regarded as limitations and as such were cast aside. Luminosity was such a casualty.

"Poetry is indispensable - if only I knew what it was for" - Jean Cocteau.

In Rembrandt's 'Night Watch' what appears to be Rembrandt's wife Saskia* strides across the centre of the painting from left to right. She illuminates her surroundings. it's as if she has become a 'beacon'. She is the militia's inspiration. This is a painting in which light not only

reveals and depicts, but is also symbolic. The 'Night Watch' represents nothing less than the birth of a nation. The 'Night Watch' is established as a national monument; an icon. Up there with the Eiffel Tower, the clock tower of Big Ben and the Statue of Liberty. The fact that light is held in awe is self-evident. Without it life would not only be inconceivable but untenable. Light features in almost all religions and broadly signifies some aspect of deity or godhead. It was Jesus Christ who famously said 'I am the light of the world'. In a more secular world light is also associated with health and happiness; radiance. From the sheen of something freshly polished to the blinding light of a nuclear explosion. Pure energy. Existence is often referred to as “a brief crack of light between two eternities of darkness.” ³

"The light that work sheds is a beautiful light, which, however, only shines with real beauty if it is illuminated by yet another light" - Ludwig Wittgenstein

It's become a nostalgic fallacy to regard art as a liberal, humanist project. It's a market - pure and simple as markets are without morality. During the last twenty years the art market has become ubiquitous . The art market like any market is without morality. It feeds a toxic mix of capital, celebrity and media. Paula's paintings act as a simile and draw our attention to the art market as a 'diamond mine' What lingers after seeing these extraordinary, luminous paintings is a sense of joy. This is a celebration of light, life and love.

The jewel paintings I am a painter, my work has become increasingly painterly, with bold use of colour, experimentation with scale and mark-making and a commitment to draughtsmanship. My current series of paintings are large scale canvases based on gemstones photographed in the Natural History Museum, London. Enlarged a thousand times these tiny stones transform into celestial entities; we can immerse ourselves in this other-worldly space. Interest in this subject was born from entirely romantic feelings whichÂ quickly evolved to encompass universal desires and obsessions. These jewel paintings are a personal celebration of love and the fragility of this ideal which we all yearn for. Jewels became a vehicle for extending my painting process; I experiment, manipulating viscous paint beside pools of barely tinted turps and using exaggerated intense colour I push the medium towards the extremes of itâ&#x20AC;&#x2122;s capabilities. Working quickly and instinctively I place the paint onto the canvas working with wet on wet glazes, merging oily translucent layers with the brush and dropping colour, allowing it to bleed and grow into the surface. From a distance brush marks and the trails of running paint are invisible, the paintings appear cohesive, even photographic. As the viewer approaches to analyse them however; the images disintegrate and the focus shifts from the subject to the physicality of the painting; close up the viewer can enjoy the luminescence of colour and experience my methods. The paint appears as ephemeral as the jewelâ&#x20AC;&#x2122;s sparkle, echoing the elusive ideals these minute treasures symbolise. Paula MacArthur - 2014 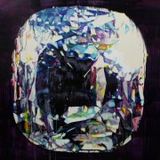 Catalogue of paintings by Paula MacArthur

Catalogue of paintings by Paula MacArthur