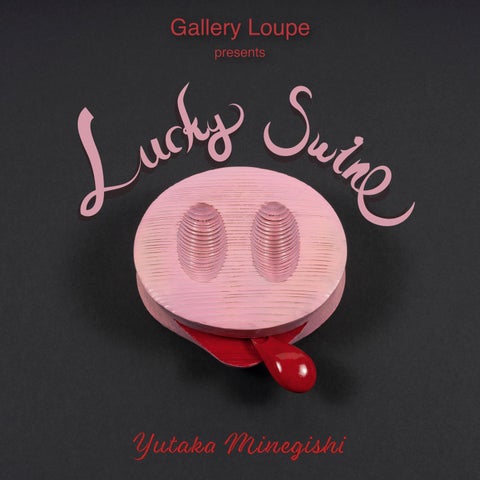 Yutaka Minegishi’s most recent work, Lucky Swine, is a series of rings and things inspired by a rather contradictory creature—the pig. Among the more intelligent animals (studies have found pigs to be smarter than dogs and even 3-year-old children), they are also, arguably, the filthiest. Habitually wallowing in farmland muck (that’s why it’s called a pigsty), pigs eat indiscriminately, sometimes growing to huge proportions. Nonetheless, pigs are gentle beings, with impressive memories and the capacity to feel human emotions. They even make excellent pets (if the wind blows in the opposite direction). For centuries eosite (pink agate) has been a favored stone for carving tiny sculptures of pigs—probably due to its porcine color, as well as a subtle surface luminosity reminiscent of pigskin. According to recent auction records, around 1900, famed Russian jeweler Peter Carl Fabergé used eosite to carve a whimsical oneinch piglet with faceted green gemstone eyes, and Manfred Wild (born 1944), a notable lapidary from the German gemstone capital, Idar-Oberstein, chose eosite for two naturalistically rendered porkers, measuring 4 ½ inches each. Munich-based Minegishi, who was born in Japan in 1973, has also selected eosite for several of the works in Lucky Swine, all of which humorously depict specific parts of the pig’s anatomy. Most are rings in the form of a pig’s snout, while an admirable feat of eosite carving is illustrated by a curly disembodied tail — which might be hung on an iron “butcher’s hook” when not being worn on a finger. Minegishi, who doesn’t predesign his rings, states: “I don’t make rings, but find [them] in single and solid materials.” For the rings in Lucky Swine, he has also carved ebony and fossilized mammoth tusk, creating notable noses of another nature, as well as mammoth tusk Knuckle Rings, which are likewise reminiscent of pig snouts, and can be worn vertically on two fingers or suspended from a cord as a pendant, brooches, “puzzle rings” comprised of multiple elements, including pearls and buffalo horn, which, when combined, depict a pig’s head, and even a hilarious salt and pepper container with concave nostrils meant to accommodate the condiments.

Minegishi makes jewelry and objects that beg to be fondled, not only worn. He typically carves chunks of natural material, such as ebony, amber, rock crystal, jet, Japanese wood, and lignum vitae, into rings exhibiting sensuous swirls, twisted planes, or breast-like hemispheres—haptic objects that manifest the power of amulets. Every angle of vision reveals an exemplary view, with each piece perfectly balanced and completely resolved. Although small in scale, Minegishi’s works display all the qualities of monumental sculpture. — Toni Greenbaum, Brooklyn, New York, May 2022

When thinking about what an artist could do during this difficult time, I realized that it was to make people smile. I said to myself, let’s make funny objects that make me smile while I’m making them. In Germany, they say “Schwein haben,” which means “be lucky.” So here’s to you, Lucky Swine! —Yutaka Minegishi

As a self-professed ring lover, I’m always on the lookout for a fabulous ring, so I must admit I was captivated by artist Yutaka Minegishi’s rings long before we met. In 2019, the year Yutaka received the prestigious Herbert Hofmann Prize, we chatted in Munich and began planning for a Spring 2020 exhibition at Gallery Loupe. Alas, that was not meant to be. Now, in 2022, the exhibition Lucky Swine is finally about to open. We’ve often spoken over the last two years, and I’ve learned more about Yutaka. He has a wicked sense of humor, loves to collect, and is a musician. But most of all, he has a knack for making me smile; during the past few years that hasn’t always been easy. So here’s to you Yutaka Minegishi! —Patti Bleicher, Director, Gallery Loupe

“No matter whether it’s a piece of rock crystal or a chunk of ruby, Minegishi simply starts sawing and filing away, following his instincts and guided by his mood of the day.” — Julie Metzdorf, Art Aurea —

“I always try to make simple rings. No, I don’t make rings, but I try to find rings in mostly single and solid materials.” — Yutaka Minegishi—

Yutaka Minegishi studied metalwork at Hiko-Mizuno College of Jewelry in Tokyo before moving to Germany, where he was a guest student at Fachhochschule in Pforzheim. From 1996-2002 he studied under Otto Künzli at the Akademie der bildenden künste, Munich, from which he received a graduate degree in 2003. He has exhibited widely, including three solo shows at the prestigious Galerie Wittenbrink in Munich and group exhibitions at the National Gallery of Victoria and Project Space as part of Radiant Pavilion at RMIT University, Melbourne. Minegishi is the recipient of several awards, including DAAD Preis (2003); Bayerischer Staatspreis (2014); and Förderpreis der Landeshauptstadt (2016), Munich, He is in several important collections, such as the Pinakothek der Moderne, die Neue Sammlung, Munich; Stichting Françoise van den Bosch, Amsterdam; Hiko-Mizuno College of Jewelry, Tokyo; Kolumba Art Museum, Cologne; The Art Gallery of Western Australia; and Alice and Louis Koch Collection, Swiss National Museum, Zurich. In 2019 Minegishi was included in SCHMUCK at the IHM in Munich, where he was a recipient of the coveted Herbert Hofmann Prize.