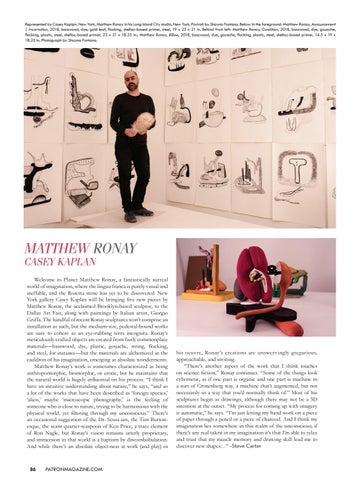 Welcome to Planet Matthew Ronay, a fantastically surreal world of imagination, where the lingua franca is purely visual and ineffable, and the Rosetta stone has yet to be discovered. New York gallery Casey Kaplan will be bringing five new pieces by Matthew Ronay, the acclaimed Brooklyn-based sculptor, to the Dallas Art Fair, along with paintings by Italian artist, Giorgio Griffa. The handful of recent Ronay sculptures won’t comprise an installation as such, but the medium-size, pedestal-bound works are sure to cohere as an eye-rubbing terra incognita. Ronay’s meticulously crafted objects are created from fairly commonplace materials—basswood, dye, plastic, gouache, string, flocking, and steel, for instance—but the materials are alchemized in the cauldron of his imagination, emerging as absolute wonderments. Matthew Ronay’s work is sometimes characterized as being anthropomorphic, biomorphic, or erotic, but he maintains that the natural world is hugely influential on his process. “I think I have an intuitive understanding about nature,” he says, “and so a lot of the works that have been described as ‘foreign species,’ ‘alien,’ maybe ‘microscopic photography,’ is the feeling of someone who is close to nature, trying to be harmonious with the physical world, yet filtering through my unconscious.” There’s an occasional suggestion of the Dr. Seuss-ian, the Tim Burtonesque, the scant quarter-teaspoon of Ken Price, a trace element of Ron Nagle, but Ronay’s vision remains utterly proprietary, and immersion in that world is a baptism by discombobulation. And while there’s an absolute object-ness at work (and play) in

his oeuvre, Ronay’s creations are unswervingly gregarious, approachable, and inviting. “There’s another aspect of the work that I think touches on science fiction,” Ronay continues. “Some of the things look cybernetic, as if one part is organic and one part is machine in a sort of Cronenberg way, a machine that’s augmented, but not necessarily in a way that you’d normally think of.” Most of his sculptures begin as drawings, although there may not be a 3D intention at the outset. “My process for coming up with imagery is automatic,” he says. “I’m just letting my hand work on a piece of paper through a pencil or a piece of charcoal. And I think my imagination lies somewhere in this realm of the unconscious; if there’s any real talent in my imagination it’s that I’m able to relax and trust that my muscle memory and drawing skill lead me to discover new shapes…” –Steve Carter 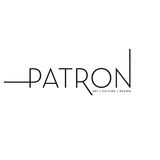