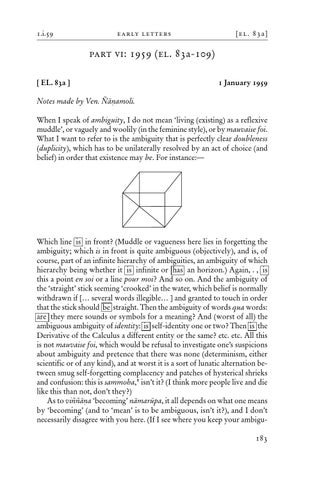 Notes made by Ven. Ñå~amoli. When I speak of ambiguity, I do not mean ‘living (existing) as a reflexive muddle’, or vaguely and woolily (in the feminine style), or by mauvaise foi. What I want to refer to is the ambiguity that is perfectly clear doubleness (duplicity), which has to be unilaterally resolved by an act of choice (and belief) in order that existence may be. For instance:—

Which line is in front? (Muddle or vagueness here lies in forgetting the ambiguity; which is in front is quite ambiguous (objectively), and is, of course, part of an infinite hierarchy of ambiguities, an ambiguity of which hierarchy being whether it is infinite or has an horizon.) Again, . , is this a point en soi or a line pour moi? And so on. And the ambiguity of the ‘straight’ stick seeming ‘crooked’ in the water, which belief is normally withdrawn if [… several words illegible… ] and granted to touch in order that the stick should be straight. Then the ambiguity of words qua words: are they mere sounds or symbols for a meaning? And (worst of all) the ambiguous ambiguity of identity: is self-identity one or two? Then is the Derivative of the Calculus a different entity or the same? etc. etc. All this is not mauvaise foi, which would be refusal to investigate one’s suspicions about ambiguity and pretence that there was none (determinism, either scientific or of any kind), and at worst it is a sort of lunatic alternation between smug self-forgetting complacency and patches of hysterical shrieks and confusion: this is sammoha,1 isn’t it? (I think more people live and die like this than not, don’t they?) As to viññå~a ‘becoming’ nåmar¨pa, it all depends on what one means by ‘becoming’ (and to ‘mean’ is to be ambiguous, isn’t it?), and I don’t necessarily disagree with you here. (If I see where you keep your ambigu- 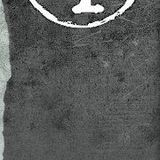