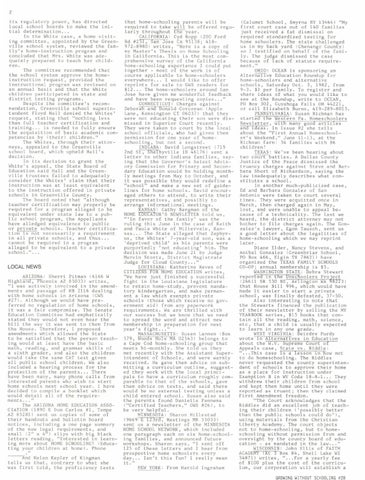 its regulatory power, has directed local school boards to make the ini­ tial determination ... In the White case, a home visit­ ing committee, appointed by the Green­ ville school system, reviewed the fam­ ily's home-instruction program and concluded that Mrs . White was ade­ quately prepared to teach her child­ reno The committee recommended that the school system approve the home­ instruction request, provided the instructional program was reviewed on an annual basis and that the White children participated in state and district testing programs. Despite the committee's recom­ mendation, Greenville school superin­ tendent Floyd Hall denied the Whites ' request, stating that "nothing less than full teacher certification and training ... is needed to fully ensure the acquisition of basic academic com­ petencies by ( their) children." The Whites, through their attor­ neys, appealed to the Greenville school board, which upheld Hall's decision. In its decision to grant the White's appeal, the State Board of Education said Hall and the Green­ ville trustees failed to adequately consider the Whites' claim that their instruction was at least equivalent to the instruction offered in private schools in Greenville County . The board noted that "although teacher certification may properly be required for a program alleged to be equivalent under state law to a pub­ lic school program, the Appellants have alledged equivalence to public or private schools. Teacher certifica­ tion is not necessarily a requirement in all private schools, and thus ... cannot be required in a program alleged to be equivalent to a private school." ... LOCAL NEWS

ARIZONA: Sherri Pitman (6166 W Highland, Phoenix AZ 85033) writes, "I was actively involved in the amend­ ments and passage of HB 2116 dealing with home schools in Arizona (GWS # 27). Although we would have pre­ ferred no regulation of home schools, it was a fair compromise . The Senate Education Committee had emphatically stated they would not even hear the bill the way it was sent to them from the House. Therefore, I proposed amendments which allowed the State to be satisfied that the person teach­ ing would at least have the basic math, reading, and grammar skills of a sixth grader, and also the children would take the same CAT test given all public school children. We also included a hearing process for the protection of the parents ... There have been many, many phone calls from interested parents who wish to start home schools next school year . I have decided to compile a booklet which would detail all of the require­ ments ... "

The ARIZONA HOME EDUCATION ASSO­ CIATION (1890 E Don Carlos #1, Tempe AZ 85281) sent us copies of some of their handouts and bulletin board notices, including a one page summary of the new legal requirements, and small ( 2" x 4" ) slips with big black letters reading, "Interested in learn­ ing more about HOME SCHOOLING? (Educa­ ting yo~r children at home). Phone ------And Helen Kepler of Kingman tells us that, contrary to what she was first told, the proficiency tests

that home-schooling parents will be required to take will be offered regu­ larly throughout rne-year. CALIFORNIA: Cyd Ropp (200 Ford Rd #251, San Jose CA 95138; 418­ 972-8980) writes, "Here is a copy of my Master's Thesis on Home Schooling in California. This is the most com­ prehensive surve y of the California home-schooling experience I could put together - most of the work is of course applicable to home-schoolers everywhere ... I would like to offer reprints for sale to GWS readers for $12 ... The home-schoolers around San Jose have given me wonderful feedback and have been requesting copies ... " CONNECTICUT: Charges against Deborah and Donald Corcoran (Apple Lane, Kensington CT 06037) that they were not educating their son were dis­ missed in Superior Court recently. They were taken to court by the local school offiCials, who had given them permission for one year of home­ schooling, but not a second. INDIANA: David Longstreet (719 2nd St, Shelbyville IN 46176) sent a letter to other Indiana families, say­ ing that the Governor's Select Advis­ ory Commission for Primary and Secon­ dary Education would be holding month­ ly meetings from May to October, and it was possible they would redefine a "school" and make a new set of guide­ lines for home schools. David encour­ aged others to attend, to write their representatives, and possibly to arrange informational meetings. KANSAS: Cathy Bergman of the HOME EDUCATOR ' S NEWSLETTER told us, "'In favor of the family' was the ruling this June in the case of Keith and Paula White of Miltervale, Kan­ sas ... The State alleged that Zephyr­ us, the Whites' 7-year-old son, was a 'deprived child ' as his parents were purportedly 'not educating' him. The decision was made June 21 by Judge Marvin Stortz, District Magistrate Judge for Cloud County ... " LOUISIANA: Katherine Reves of CITIZENS FOR HOME EDUCATION writes, "We have just finished a successful fight in the Louisiana legislature to retain home-study, prevent manda­ tory kindergarten, and make perman­ ent a law which exempts private schools (those which receive no gov­ ernment aid) from any paperwork requirements. We are thrilled with our success but we know that we need to spread the word and attract new membership in preparation for next year's fight ... " MASSACHUSETTS: Susan Lannen ( Box 579, Woods Hole MA 02543) belongs to a Cape Cod home-schooling group that meets bi-monthly. She told us they met recently with the Assistant Super­ intendent of Schools, and were warmly received . He gave them advice on sub­ mitting a curriculum outline, suggest­ ed they work with the local princi­ pals to have a curriculum roughly com­ parable to that of the schools, gave them advice on texts, and said there would be no external testing unless a child entered school. Susan also said the parents found Danielle Fennema ( "Certified Teachers," GWS #26), to be very helpful. MINNESOTA: Sharon Hillestad (9669 E l23rd, Hastings MN 55033) sent us a newsletter of the MINNESOTA HOME SCHOOL NETWORK, which included one paragraph each on six home-school­ ing families, and announced future workshops. Sharon says, "I sent off 125 of these letters and I hear from prospective home schoolers every day ... Isn't this fun? I really mean it."

(Calumet School, Smyrna NY 13464) "My first court case out of 140 families just received a fat dismissal on required standardized testing for home schoolers . The state challenged us in my back yard (Chenango County) so I testified on behalf of the fami­ ly. The judge dismissed the case because of lack of statute require­ ment."

OHIO: OCEAN is sponsoring an Alternative Education Roundup for home-schoolers and alternative SChools, Saturday Oct. 3, 1982, from 9-3. $1 per family. To register and share ideas of what you would like to see at the Roundup, write to OCEAN, PO Box 302, Cuyahoga Falls OH 44221, or call El izabeth Burns, 419-289-8013. PENNSYLVANIA: Susan Richman has started the Western Pa. Homeschoolers Newsletter, with many good articles and ~deas. In Issue #2 she tells about the "First Annual Homeschool­ er's Weekend," June 11-13, at the Richman farm: 34 families with 86 children' TEXAS: We've been hearing about two court battles. A Dallas County Justice of the Peace dismissed the truancy charges against Steve and Bar­ bara Short of Richardson, saying the law inadequately describes what con­ stitutes a school . In another much-publicized case, Ed and Barbara Gonzalez of San Antonio were taken to court several times. They were acquitted once in March, then charged again in May, lost, and were unable to appeal be­ cause of a technicality. The last we heard, the district attorney may not bother to file charges again. The Gon­ zalez's lawyer, Egon Tausch, sent us a good letter about the legalities of home-schooling which we may reprint later. Diane Elder, Nancy Stevens, and Anibal Gonzalez (Greenbriar School, PO Box 466, Elgin TX 78621) have organized the TEXAS FAMILY SCHOOLS CO-OP; annual membership is $5. WASHINGTON STATE: Debra Stewart reported in the Unschoolers Pro~ect (26611 SR 530 NE, Arlington WA 8223) that House Bill 996, which would have made it easier to start a private school, was finally defeated, 37-50 . Also interesting to note that the Stewarts financed the publication of their newsletter by selling the MY YEARBOOK series, $15 books that con­ tain all the reading, math, science, etc, that a child is usually expected to learn in anyone grade. WEST VIRGINIA: Deirdre Purdy wrote-rn-Alternat~ves in Education about the W.V. Supreme Court of Appeals case, State vs. Riddle: " ... This case ~s a lesson in how not to do homeschooling. The Riddles never requested the county superinten­ dent of schools to approve their home as a place for instruction under Exemption B in WV Code 18-8-1 . .. They withdrew their children from school and kept them home until they were reported as truant; then they claimed First Amendment freedom. "The Court acknowledges that the Riddles did an excellent job of teach­ ing their children ( 'p ossibly better than the public sc hools could do'), using materials from the Christian Liberty Academy. The court objects not to home-schooling, but to home­ schooling without permission from and oversight by the county board of edu­ cation - as mandated in the law ... " WISCONSIN: John Ellis of FAITH ACADEMY (Rt 3 Box 84, Shell Lake WI 54871) writes, " ... For a yearly fee of $100 plus the cost of the curricu­ lum, our corporation will establish a 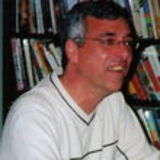