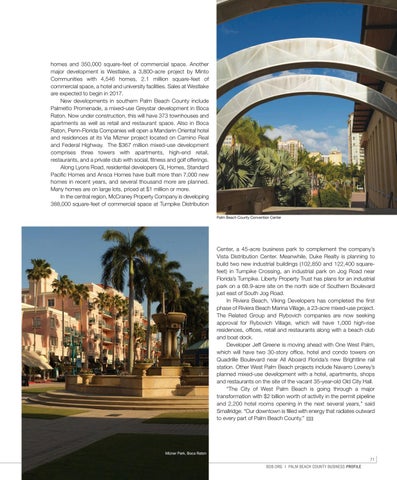 homes and 350,000 square-feet of commercial space. Another major development is Westlake, a 3,800-acre project by Minto Communities with 4,546 homes, 2.1 million square-feet of commercial space, a hotel and university facilities. Sales at Westlake are expected to begin in 2017. New developments in southern Palm Beach County include Palmetto Promenade, a mixed-use Greystar development in Boca Raton. Now under construction, this will have 373 townhouses and apartments as well as retail and restaurant space. Also in Boca Raton, Penn-Florida Companies will open a Mandarin Oriental hotel and residences at its Via Mizner project located on Camino Real and Federal Highway. The $367 million mixed-use development comprises three towers with apartments, high-end retail, restaurants, and a private club with social, fitness and golf offerings. Along Lyons Road, residential developers GL Homes, Standard Pacific Homes and Ansca Homes have built more than 7,000 new homes in recent years, and several thousand more are planned. Many homes are on large lots, priced at $1 million or more. In the central region, McCraney Property Company is developing 388,000 square-feet of commercial space at Turnpike Distribution Palm Beach County Convention Center

Center, a 45-acre business park to complement the company’s Vista Distribution Center. Meanwhile, Duke Realty is planning to build two new industrial buildings (102,850 and 122,400 squarefeet) in Turnpike Crossing, an industrial park on Jog Road near Florida’s Turnpike. Liberty Property Trust has plans for an industrial park on a 68.9-acre site on the north side of Southern Boulevard just east of South Jog Road. In Riviera Beach, Viking Developers has completed the first phase of Riviera Beach Marina Village, a 23-acre mixed-use project. The Related Group and Rybovich companies are now seeking approval for Rybovich Village, which will have 1,000 high-rise residences, offices, retail and restaurants along with a beach club and boat dock. Developer Jeff Greene is moving ahead with One West Palm, which will have two 30-story office, hotel and condo towers on Quadrille Boulevard near All Aboard Florida’s new Brightline rail station. Other West Palm Beach projects include Navarro Lowrey’s planned mixed-use development with a hotel, apartments, shops and restaurants on the site of the vacant 35-year-old Old City Hall. “The City of West Palm Beach is going through a major transformation with $2 billion worth of activity in the permit pipeline and 2,200 hotel rooms opening in the next several years,” said Smallridge. “Our downtown is filled with energy that radiates outward to every part of Palm Beach County.”

PROFILE, now in its 26th year of publication, is recognized as the business annual of record for Palm Beach County, Florida. This premier, a...

PROFILE, now in its 26th year of publication, is recognized as the business annual of record for Palm Beach County, Florida. This premier, a...