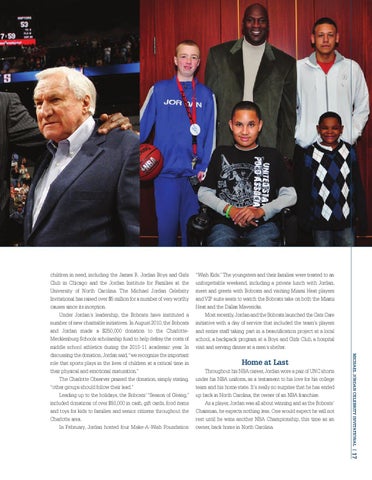 children in need, including the James R. Jordan Boys and Girls

“Wish Kids.” The youngsters and their families were treated to an

Club in Chicago and the Jordan Institute for Families at the

unforgettable weekend, including a private lunch with Jordan,

meet and greets with Bobcats and visiting Miami Heat players

causes since its inception.

Heat and the Dallas Mavericks.

Under Jordan’s leadership, the Bobcats have instituted a

Most recently, Jordan and the Bobcats launched the Cats Care

number of new charitable initiatives. In August 2010, the Bobcats

Mecklenburg Schools scholarship fund to help defray the costs of

school, a backpack program at a Boys and Girls Club, a hospital

middle school athletics during the 2010-11 academic year. In

visit and serving dinner at a men&#39;s shelter.

role that sports plays in the lives of children at a critical time in their physical and emotional maturation.” The Charlotte Observer praised the donation, simply stating, “other groups should follow their lead.” Leading up to the holidays, the Bobcats’ “Season of Giving,”

Home at Last Throughout his NBA career, Jordan wore a pair of UNC shorts under his NBA uniform, as a testament to his love for his college team and his home state. It’s really no surprise that he has ended up back in North Carolina, the owner of an NBA franchise.

included donations of over $50,000 in cash, gift cards, food items

As a player, Jordan was all about winning and as the Bobcats’

and toys for kids to families and senior citizens throughout the

Chairman, he expects nothing less. One would expect he will not

rest until he wins another NBA Championship, this time as an

owner, back home in North Carolina.

discussing the donation, Jordan said, “we recognize the important