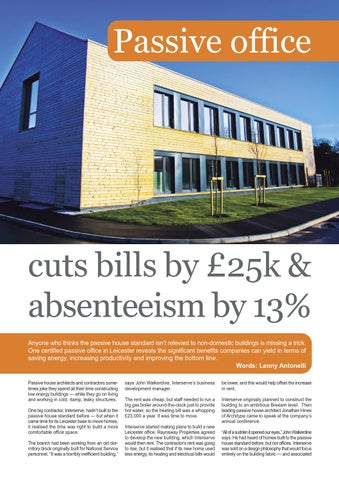 cuts bills by £25k &amp; absenteeism by 13% Anyone who thinks the passive house standard isn’t relevant to non-domestic buildings is missing a trick. One certified passive office in Leicester reveals the significant benefits companies can yield in terms of saving energy, increasing productivity and improving the bottom line. Words: Lenny Antonelli Passive house architects and contractors sometimes joke they spend all their time constructing low energy buildings — while they go on living and working in cold, damp, leaky structures. One big contractor, Interserve, hadn’t built to the passive house standard before — but when it came time for its Leicester base to move homes, it realised the time was right to build a more comfortable office space. The branch had been working from an old dormitory block originally built for National Service personnel. “It was a horribly inefficient building,”

be lower, and this would help offset the increase in rent.

The rent was cheap, but staff needed to run a big gas boiler around-the-clock just to provide hot water, so the heating bill was a whopping £23,000 a year. It was time to move.

Interserve originally planned to construct the building to an ambitious Breeam level. Then leading passive house architect Jonathan Hines of Architype came to speak at the company’s annual conference.

Interserve started making plans to build a new Leicester office. Raynsway Properties agreed to develop the new building, which Interserve would then rent. The contractor’s rent was going to rise, but it realised that if its new home used less energy, its heating and electrical bills would

“All of a sudden it opened our eyes,” John Walkerdine says. He had heard of homes built to the passive house standard before, but not offices. Interserve was sold on a design philosophy that would focus entirely on the building fabric — and associated 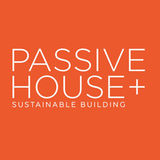