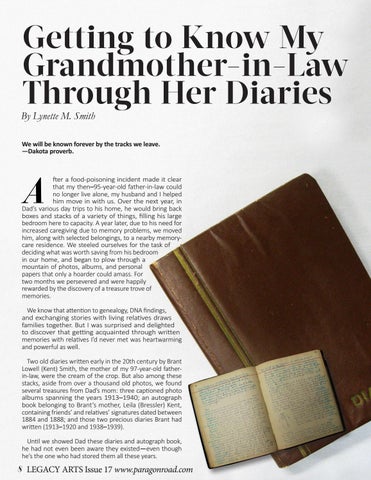 Getting to Know My Grandmother-in-Law Through Her Diaries

We will be known forever by the tracks we leave. —Dakota proverb.

fter a food-poisoning incident made it clear that my then–95-year-old father-in-law could no longer live alone, my husband and I helped him move in with us. Over the next year, in Dad’s various day trips to his home, he would bring back boxes and stacks of a variety of things, filling his large bedroom here to capacity. A year later, due to his need for increased caregiving due to memory problems, we moved him, along with selected belongings, to a nearby memorycare residence. We steeled ourselves for the task of deciding what was worth saving from his bedroom in our home, and began to plow through a mountain of photos, albums, and personal papers that only a hoarder could amass. For two months we persevered and were happily rewarded by the discovery of a treasure trove of memories. We know that attention to genealogy, DNA findings, and exchanging stories with living relatives draws families together. But I was surprised and delighted to discover that getting acquainted through written memories with relatives I’d never met was heartwarming and powerful as well. Two old diaries written early in the 20th century by Brant Lowell (Kent) Smith, the mother of my 97-year-old fatherin-law, were the cream of the crop. But also among these stacks, aside from over a thousand old photos, we found several treasures from Dad’s mom: three captioned photo albums spanning the years 1913–1940; an autograph book belonging to Brant’s mother, Leila (Bressler) Kent, containing friends’ and relatives’ signatures dated between 1884 and 1888; and those two precious diaries Brant had written (1913–1920 and 1938–1939). Until we showed Dad these diaries and autograph book, he had not even been aware they existed—even though he’s the one who had stored them all these years.