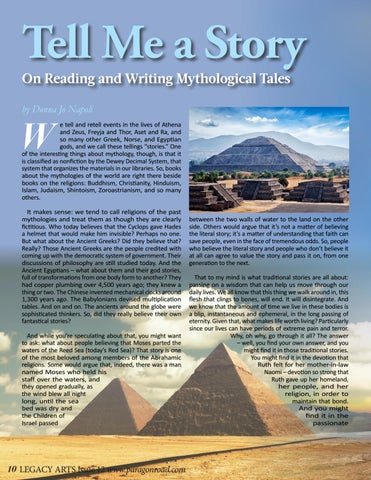 e tell and retell events in the lives of Athena and Zeus, Freyja and Thor, Aset and Ra, and so many other Greek, Norse, and Egyptian gods, and we call these tellings “stories.” One of the interesting things about mythology, though, is that it is classified as nonfiction by the Dewey Decimal System, that system that organizes the materials in our libraries. So, books about the mythologies of the world are right there beside books on the religions: Buddhism, Christianity, Hinduism, Islam, Judaism, Shintoism, Zoroastrianism, and so many others. It makes sense: we tend to call religions of the past mythologies and treat them as though they are clearly fictitious. Who today believes that the Cyclops gave Hades a helmet that would make him invisible? Perhaps no one. But what about the Ancient Greeks? Did they believe that? Really? Those Ancient Greeks are the people credited with coming up with the democratic system of government. Their discussions of philosophy are still studied today. And the Ancient Egyptians – what about them and their god stories, full of transformations from one body form to another? They had copper plumbing over 4,500 years ago; they knew a thing or two. The Chinese invented mechanical clocks around 1,300 years ago. The Babylonians devised multiplication tables. And on and on. The ancients around the globe were sophisticated thinkers. So, did they really believe their own fantastical stories? And while you’re speculating about that, you might want to ask: what about people believing that Moses parted the waters of the Reed Sea (today’s Red Sea)? That story is one of the most beloved among members of the Abrahamic religions. Some would argue that, indeed, there was a man named Moses who held his staff over the waters, and they opened gradually, as the wind blew all night long, until the sea bed was dry and the Children of Israel passed

between the two walls of water to the land on the other side. Others would argue that it’s not a matter of believing the literal story; it’s a matter of understanding that faith can save people, even in the face of tremendous odds. So, people who believe the literal story and people who don’t believe it at all can agree to value the story and pass it on, from one generation to the next. That to my mind is what traditional stories are all about: passing on a wisdom that can help us move through our daily lives. We all know that this thing we walk around in, this flesh that clings to bones, will end. It will disintegrate. And we know that the amount of time we live in these bodies is a blip, instantaneous and ephemeral, in the long passing of eternity. Given that, what makes life worth living? Particularly since our lives can have periods of extreme pain and terror. Why, oh why, go through it all? The answer – well, you find your own answer, and you might find it in those traditional stories. You might find it in the devotion that Ruth felt for her mother-in-law Naomi – devotion so strong that Ruth gave up her homeland, her people, and her religion, in order to maintain that bond. And you might find it in the passionate