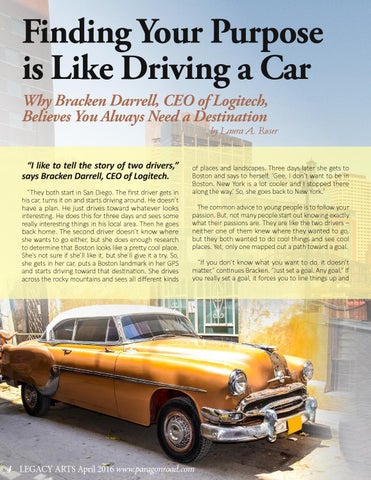 Finding Your Purpose is Like Driving a Car Why Bracken Darrell, CEO of Logitech, Believes You Always Need a Destination

by Laura A. Roser

“I like to tell the story of two drivers,” says Bracken Darrell, CEO of Logitech. “They both start in San Diego. The first driver gets in his car, turns it on and starts driving around. He doesn’t have a plan. He just drives toward whatever looks interesting. He does this for three days and sees some really interesting things in his local area. Then he goes back home. The second driver doesn’t know where she wants to go either, but she does enough research to determine that Boston looks like a pretty cool place. She’s not sure if she’ll like it, but she’ll give it a try. So, she gets in her car, puts a Boston landmark in her GPS and starts driving toward that destination. She drives across the rocky mountains and sees all different kinds

of places and landscapes. Three days later she gets to Boston and says to herself, ‘Gee, I don’t want to be in Boston. New York is a lot cooler and I stopped there along the way.’ So, she goes back to New York.” The common advice to young people is to follow your passion. But, not many people start out knowing exactly what their passions are. They are like the two drivers – neither one of them knew where they wanted to go, but they both wanted to do cool things and see cool places. Yet, only one mapped out a path toward a goal. “If you don’t know what you want to do, it doesn’t matter,” continues Bracken. “Just set a goal. Any goal.” If you really set a goal, it forces you to line things up and

Steve Jobs's Final Regrets About His Family. Interviews with CEOs of Logitech, Johnny Rockets and Sharp Healthcare. How Legends Are Created.