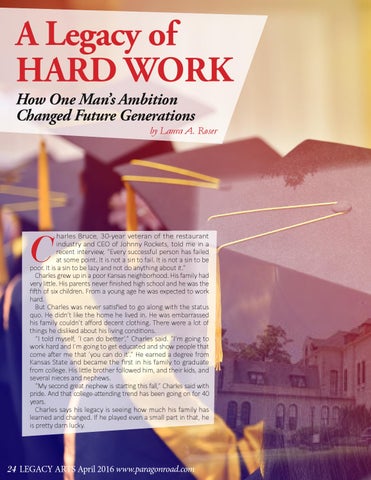 by Laura A. Roser

harles Bruce, 30-year veteran of the restaurant industry and CEO of Johnny Rockets, told me in a recent interview, “Every successful person has failed at some point. It is not a sin to fail. It is not a sin to be poor. It is a sin to be lazy and not do anything about it.” Charles grew up in a poor Kansas neighborhood. His family had very little. His parents never finished high school and he was the fifth of six children. From a young age he was expected to work hard. But Charles was never satisfied to go along with the status quo. He didn’t like the home he lived in. He was embarrassed his family couldn’t afford decent clothing. There were a lot of things he disliked about his living conditions. “I told myself, ‘I can do better’,” Charles said. “I’m going to work hard and I’m going to get educated and show people that come after me that ‘you can do it’.” He earned a degree from Kansas State and became the first in his family to graduate from college. His little brother followed him, and their kids, and several nieces and nephews. “My second great nephew is starting this fall,” Charles said with pride. And that college-attending trend has been going on for 40 years. Charles says his legacy is seeing how much his family has learned and changed. If he played even a small part in that, he is pretty darn lucky.

Steve Jobs's Final Regrets About His Family. Interviews with CEOs of Logitech, Johnny Rockets and Sharp Healthcare. How Legends Are Created.