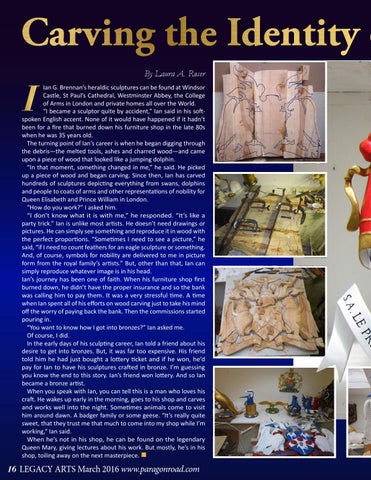 By Laura A. Roser Ian G. Brennan’s heraldic sculptures can be found at Windsor Castle, St Paul’s Cathedral, Westminster Abbey, the College of Arms in London and private homes all over the World. “I became a sculptor quite by accident,” Ian said in his softspoken English accent. None of it would have happened if it hadn’t been for a fire that burned down his furniture shop in the late 80s when he was 35 years old. The turning point of Ian’s career is when he began digging through the debris—the melted tools, ashes and charred wood—and came upon a piece of wood that looked like a jumping dolphin. “In that moment, something changed in me,” he said. He picked up a piece of wood and began carving. Since then, Ian has carved hundreds of sculptures depicting everything from swans, dolphins and people to coats of arms and other representations of nobility for Queen Elisabeth and Prince William in London. “How do you work?” I asked him. “I don’t know what it is with me,” he responded. “It’s like a party trick.” Ian is unlike most artists. He doesn’t need drawings or pictures. He can simply see something and reproduce it in wood with the perfect proportions. “Sometimes I need to see a picture,” he said, “if I need to count feathers for an eagle sculpture or something. And, of course, symbols for nobility are delivered to me in picture form from the royal family’s artists.” But, other than that, Ian can simply reproduce whatever image is in his head. Ian’s journey has been one of faith. When his furniture shop first burned down, he didn’t have the proper insurance and so the bank was calling him to pay them. It was a very stressful time. A time when Ian spent all of his efforts on wood carving just to take his mind off the worry of paying back the bank. Then the commissions started pouring in. “You want to know how I got into bronzes?” Ian asked me. Of course, I did. In the early days of his sculpting career, Ian told a friend about his desire to get into bronzes. But, it was far too expensive. His friend told him he had just bought a lottery ticket and if he won, he’d pay for Ian to have his sculptures crafted in bronze. I’m guessing you know the end to this story. Ian’s friend won lottery. And so Ian became a bronze artist. When you speak with Ian, you can tell this is a man who loves his craft. He wakes up early in the morning, goes to his shop and carves and works well into the night. Sometimes animals come to visit him around dawn. A badger family or some geese. “It’s really quite sweet, that they trust me that much to come into my shop while I’m working,” Ian said. When he’s not in his shop, he can be found on the legendary Queen Mary, giving lectures about his work. But mostly, he’s in his shop, toiling away on the next masterpiece. 

This issue features: Creating a Portfolio of Unforgettable Memories: Q&A with Daniel Burrus, New York Times bestseller and one of the world’s leading futurists on global trends and innovation. Preserving Your Company Legacy at Retirement: How a small Company lives on after its founder retires and cashes out. Transferring Wealth the Right Way: Why intergenerational wealth transfers fail 70% of the time. Sculpting The Identity of Royalty: How UK-based artist, Ian G. Brennan became the official sculptor for England's royal family. Immortalizing Your Family Through Heraldry: How to brand your family with a custom coat of arms. Ancient Wisdom: Marcus Aurelius on retreating into the soul.