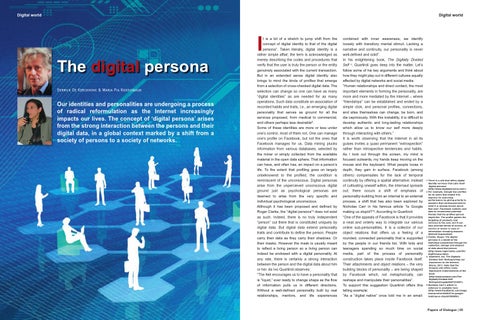 Our identities and personalities are undergoing a process of radical reformulation as the Internet increasingly impacts our lives. The concept of ‘digital persona’ arises from the strong interaction between the persons and their digital data, in a global context marked by a shift from a society of persons to a society of networks.

t is a bit of a stretch to jump shift from the concept of digital identity to that of the digital persona1. Taken literally, digital identity is a rather simple affair; the term is acknowledged as merely describing the codes and procedures that verify that the user is truly the person or the entity genuinely associated with the current transaction. But in an extended sense digital identity also brings to mind the kinds of profiles that emerge from a selection of cross-checked digital data. The selection can change so one can have as many “digital identities” as are needed for as many operations. Such data constitute an association of recorded habits and traits, i.e., an emerging digital personality that serves as ground for all the services proposed, from medical to commercial, and others perhaps less desirable2. Some of these identities are more or less under one’s control, most of them not. One can manage one’s profile on Facebook, but not the ones that Facebook manages for us. Data mining plucks information from various databases, selected by the miner or simply collected from the available material in the open data sphere. That information can have, and often has, an impact on a person’s life. To the extent that profiling goes on largely unbeknownst to the profiled, the condition is reminiscent of the unconscious. Digital personas arise from the unpercieved unconscious digital ground just as psychological personas are deemed to arise from the very specific and individual psychological unconscious. Although it has been proposed and defined by Roger Clarke, the “digital persona”3 does not exist as such. Indeed, there is no truly independent “person” out there that is constituted uniquely by digital data. But digital data extend personality traits and contribute to define the person. People carry their data as they carry their shadows. Or their masks. However the mask is usually meant to reflect a living person so a living person can indeed be endowed with a digital personality. At any rate, there is certainly a strong interaction between the person and the digital data about him or her. As Ivo Quartiroli observes: “The Net encourages us to have a personality that is “liquid,” ever ready to change shape as the flow of information pulls us in different directions. Without a well-defined personality built by real relationships, mentors, and life experiences

combined with inner awareness, we identify loosely with transitory mental stimuli. Lacking a narrative and continuity, our personality is never well-defined and solid”. In his enlightening book, The Digitally Divided Self 4, Quartiroli goes deep into the matter. Let’s follow some of his key arguments and think about how they might play out in different cultures equally affected by digital networks and social media: “Human relationships and direct contact, the most important elements in forming the personality, are more and more mediated by the Internet – where “friendships” can be established and ended by a simple click, and personal profiles, connections, and sites themselves can change, be born, and die capriciously. With this instability, it is difficult to develop authentic and long-lasting relationships which allow us to know our self more deeply through interacting with others.” It is worth observing that the Internet in all its guises invites a quasi permanent “extrospection” rather than introspective tendencies and habits. As I look out through the screen, my mind is focused outwards, my hands keep moving on the mouse and the keyboard. What people loose in depth, they gain in surface. Facebook (among others) compensates for the lack of temporal continuity by offering a spatial alternative: instead of cultivating oneself within, the internaut spreads out; there occurs a shift of emphasis of personality-building from an internal to an external process, a shift that has also been explored by Nicholas Carr in his famous article “Is Google making us stupid?”5. According to Quartiroli: “One of the appeals of Facebook is that it provides a neat and orderly way to integrate our various online sub-personalities. It is a collector of our object relations that offers us a feeling of a rounded, connected personality that is supported by the people in our friends list. With kids and teenagers spending so much time on social media, part of the process of personality construction takes place inside Facebook itself. Their attachments and object relations – the very building blocks of personality – are being shaped by Facebook which, not metaphorically, can reshape and manipulate their personalities”. To support this suggestion Quartiroli offers this telling example: “As a “digital native” once told me in an email:

1 There is a site that offers digital identity services that calls itself ‘digital persona’ (http://www.digitalpersona.com/). 2 For example, Google has profiles on its users that enable it to improve its searching performance by giving priority to answers that correspond best to what it is already known about that user; Facebook collects user data to recommend potential friends that the profiled person might like. The profile guides the targeting of products and services to the user, but it can also provoke denial of access, of service or worse in case of information revealing features deemed inapropriate. 3 Clarke, Roger, The digital persona is a model of the individual established through the collection, storage and analysis of data about that person (http://www.rogerclarke.com/DV/ DigPersona.html). 4 Quartiroli, Ivo, The Digitally Divided Self: Relinquishing our Awareness to the Internet, Silens, 2011. Note that the Amazon site offers many impressive endorsements of the book (http://www.amazon.com/TheDigitally-Divided-SelfRelinquishing/dp/8897233007). 5 Nicholas Carr’s article in extensor is available here: (http://www.theatlantic.com/maga zine/archive/2008/07/is-googlemaking-us-stupid/306868/).