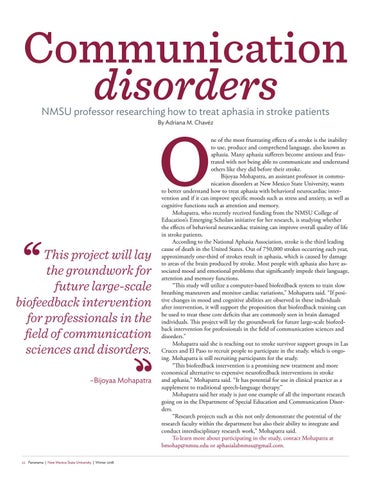 This project will lay the groundwork for future large-scale biofeedback intervention for professionals in the field of communication sciences and disorders. –Bijoyaa Mohapatra

ne of the most frustrating effects of a stroke is the inability to use, produce and comprehend language, also known as aphasia. Many aphasia sufferers become anxious and frustrated with not being able to communicate and understand others like they did before their stroke. Bijoyaa Mohapatra, an assistant professor in communication disorders at New Mexico State University, wants to better understand how to treat aphasia with behavioral neurocardiac intervention and if it can improve specific moods such as stress and anxiety, as well as cognitive functions such as attention and memory. Mohapatra, who recently received funding from the NMSU College of Education’s Emerging Scholars initiative for her research, is studying whether the effects of behavioral neurocardiac training can improve overall quality of life in stroke patients. According to the National Aphasia Association, stroke is the third leading cause of death in the United States. Out of 750,000 strokes occurring each year, approximately one-third of strokes result in aphasia, which is caused by damage to areas of the brain produced by stroke. Most people with aphasia also have associated mood and emotional problems that significantly impede their language, attention and memory functions. “This study will utilize a computer-based biofeedback system to train slow breathing maneuvers and monitor cardiac variations,” Mohapatra said. “If positive changes in mood and cognitive abilities are observed in these individuals after intervention, it will support the proposition that biofeedback training can be used to treat these core deficits that are commonly seen in brain damaged individuals. This project will lay the groundwork for future large-scale biofeedback intervention for professionals in the field of communication sciences and disorders.” Mohapatra said she is reaching out to stroke survivor support groups in Las Cruces and El Paso to recruit people to participate in the study, which is ongoing. Mohapatra is still recruiting participants for the study. “This biofeedback intervention is a promising new treatment and more economical alternative to expensive neurofeedback interventions in stroke and aphasia,” Mohapatra said. “It has potential for use in clinical practice as a supplement to traditional speech-language therapy.” Mohapatra said her study is just one example of all the important research going on in the Department of Special Education and Communication Disorders. “Research projects such as this not only demonstrate the potential of the research faculty within the department but also their ability to integrate and conduct interdisciplinary research work,” Mohapatra said. To learn more about participating in the study, contact Mohapatra at bmohap@nmsu.edu or aphasialabnmsu@gmail.com. 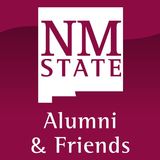