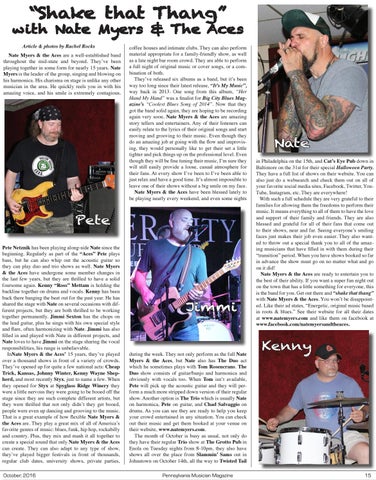 with Nate Myers & The Aces Article & photos by Rachel Rocks

Nate Myers & the Aces are a well-established band throughout the mid-state and beyond. They’ve been playing together in some form for nearly 15 years. Nate Myers is the leader of the group, singing and blowing on his harmonica. His charisma on stage is unlike any other musician in the area. He quickly reels you in with his amazing voice, and his smile is extremely contagious.

coffee houses and intimate clubs. They can also perform material appropriate for a family-friendly show, as well as a late night bar room crowd. They are able to perform a full night of original music or cover songs, or a combination of both. They’ve released six albums as a band, but it’s been way too long since their latest release, “It’s My Music”, way back in 2013. One song from this album, “Her Hand My Hand” was a finalist for Big City Blues Magazine’s “Coolest Blues Song of 2014”. Now that they got the band solid again, they are hoping to be recording again very soon. Nate Myers & the Aces are amazing story tellers and entertainers. Any of their listeners can easily relate to the lyrics of their original songs and start moving and grooving to their music. Even though they do an amazing job at going with the flow and improvising, they would personally like to get their set a little tighter and pick things up on the professional level. Even though they will be fine tuning their music, I’m sure they will still easily provide a loose, casual atmosphere for their fans. At every show I’ve been to I’ve been able to just relax and have a good time. It’s almost impossible to leave one of their shows without a big smile on my face. Nate Myers & the Aces have been blessed lately to be playing nearly every weekend, and even some nights

Pete Pete Netznik has been playing along-side Nate since the beginning. Regularly as part of the “Aces” Pete plays bass, but he can also whip out the acoustic guitar so they can play duo and trio shows as well. Nate Myers & the Aces have undergone some member changes in the last few years, but they are thrilled to have a solid foursome again. Kenny “Ross” Mettam is holding the backline together on drums and vocals. Kenny has been back there banging the beat out for the past year. He has shared the stage with Nate on several occasions with different projects, but they are both thrilled to be working together permanently. Jimmi Sexton has the chops on the lead guitar, plus he sings with his own special style and flare, often harmonizing with Nate. Jimmi has also filled in and played with Nate in different projects, and Nate loves to have Jimmi on the stage sharing the vocal responsibilities, his range is unbelievable. InNate Myers & the Aces’ 15 years, they’ve played over a thousand shows in front of a variety of crowds. They’ve opened up for quite a few national acts: Cheap Trick, Kansas, Johnny Winter, Kenny Wayne Shepherd, and most recently Styx, just to name a few. When they opened for Styx at Spyglass Ridge Winery they were a little nervous they were going to be booed off the stage since they are such complete different artists, but they were thrilled that not only didn’t they get booed, people were even up dancing and grooving to the music. That is a great example of how flexible Nate Myers & the Aces are. They play a great mix of all of America’s favorite genres of music: blues, funk, hip hop, rockabilly and country. Plus, they mix and mash it all together to create a special sound that only Nate Myers & the Aces can create. They can also adapt to any type of show, they’ve played bigger festivals in front of thousands, regular club dates, university shows, private parties, October, 2016

Jimmi during the week. They not only perform as the full Nate Myers & the Aces, but Nate also has The Duo act which he sometimes plays with Tom Rosencrans. The Duo show consists of guitar/banjo and harmonica and obviously with vocals too. When Tom isn’t available, Pete will pick up the acoustic guitar and they will perform a much more stripped down version of their regular show. Another option is The Trio which is usually Nate on harmonica, Pete on guitar, and Chad Salvaggio on drums. As you can see they are ready to help you keep your crowd entertained in any situation. You can check out their music and get them booked at your venue on their website, www.natemyers.com. The month of October is busy as usual, not only do they have their regular Trio show at The Grotto Pub in Enola on Tuesday nights from 8-10pm, they also have shows all over the place from Slammin’ Sams out in Johnstown on October 14th, all the way to Twisted Tail Pennsylvania Musician Magazine

in Philadelphia on the 15th, and Cat’s Eye Pub down in Baltimore on the 31st for their special Halloween Party. They have a full list of shows on their website. You can also just do a websearch and check them out on all of your favorite social media sites, Facebook, Twitter, YouTube, Instagram, etc. They are everywhere! With such a full schedule they are very grateful to their families for allowing them the freedoms to perform their music. It means everything to all of them to have the love and support of their family and friends. They are also blessed and grateful for all of their fans that come out to their shows, near and far. Seeing everyone’s smiling faces just makes their job even easier. They also wanted to throw out a special thank you to all of the amazing musicians that have filled in with them during their “transition” period. When you have shows booked so far in advance the show must go on no matter what and go on it did! Nate Myers & the Aces are ready to entertain you to the best of their ability. If you want a super fun night out on the town that has a little something for everyone, this is the band for you. Get out there and “shake that thang” with Nate Myers & the Aces. You won’t be disappointed. Like their ad states, “Energetic, original music based in roots & blues.” See their website for all their dates at www.natemyers.com and like them on facebook at www.facebook.com/natemyersandtheaces. The PA Musician Magazine is a FREE Publication distributed with 12,000 copies throughout the state of Pennsylvania. We are the magazine for...

The PA Musician Magazine is a FREE Publication distributed with 12,000 copies throughout the state of Pennsylvania. We are the magazine for...