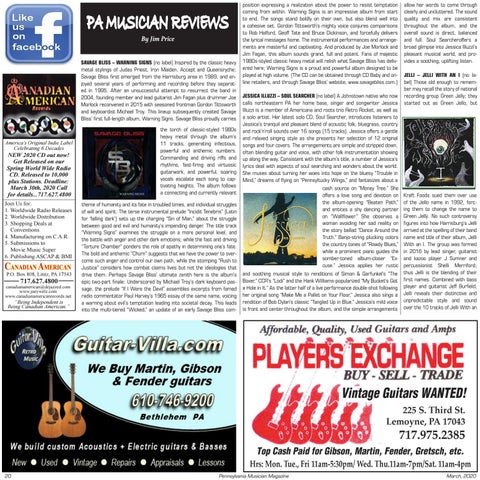 “Being Independent is Being Canadian American.”

the torch of classic-styled 1980s heavy metal through the album’s 11 tracks, generating infectious, powerful and anthemic numbers. Commanding and driving riffs and rhythms, fast-firing and virtuosic guitarwork, and powerful, soaring vocals escalate each song to captivating heights. The album follows a connecting and currently relevant theme of humanity and its fate in troubled times, and individual struggles of will and spirit. The terse instrumental prelude “Incidit Tenebris” (Latin for ‘falling dark’) sets up the charging “Sin of Man,” about the struggle between good and evil and humanity’s impending danger. The title track “Warning Signs” examines the struggle on a more personal level, and the battle with anger and other dark emotions; while the fast and driving “Torture Chamber” ponders the role of apathy in determining one’s fate. The bold and anthemic “Churn” suggests that we have the power to overcome such anger and control our own path, while the stomping “Rush to Justice” considers how combat claims lives but not the ideologies that drive them. Perhaps Savage Bliss’ ultimate zenith here is the album’s epic two-part finale: Underscored by Michael Troy’s dark keyboard passage, the prelude “If I Were the Devil” assembles excerpts from famed radio commentator Paul Harvey’s 1965 essay of the same name, voicing a warning about evil’s temptation leading into societal decay. This leads into the multi-tiered “Wicked,” an update of an early Savage Bliss com-

position expressing a realization about the power to resist temptation coming from within. Warning Signs is an impressive album from start to end. The songs stand boldly on their own, but also blend well into a cohesive set. Gordon Tittsworth’s mighty voice conjures comparisons to Rob Halford, Geoff Tate and Bruce Dickinson, and forcefully delivers the lyrical messages home. The instrumental performances and arrangements are masterful and captivating. And produced by Joe Morlock and Jim Fagan, this album sounds grand, full and potent. Fans of majestic 1980s-styled classic heavy metal will relish what Savage Bliss has delivered here; Warning Signs is a proud and powerful album designed to be played at high volume. (The CD can be obtained through CD Baby and online retailers, and through Savage Bliss’ website, www.savagebliss.com.) JESSICA ILLUZZI – SOUL SEARCHER (no label) A Johnstown native who now calls northeastern PA her home base, singer and songwriter Jessica Illuzzi is a member of Americana and roots trio Retro Rocket, as well as a solo artist. Her latest solo CD, Soul Searcher, introduces listeners to Jessica’s tranquil and pleasant blend of acoustic folk, bluegrass, country and rock’n’roll sounds over 16 songs (15 tracks). Jessica offers a gentle and relaxed singing style as she presents her selection of 12 original songs and four covers. The arrangements are simple and stripped down, often blending guitar and voice, with other folk instrumentation showing up along the way. Consistent with the album’s title, a number of Jessica’s lyrics deal with aspects of soul searching and wonders about the world. She muses about turning her woes into hope on the bluesy “Trouble in Mind,” dreams of flying on “Pennsyltucky Wings,” and fantasizes about a cash source on “Money Tree.” She offers a love song and devotion on the album-opening “Beaten Path,” and entices a shy dancing partner on “Wallflower.” She observes a woman avoiding her sad reality on the story ballad “Dance Around the Truth.” Banjo-string plucking colors the country tones of “Rowdy Blues,” while a prominent piano guides the somber-toned album-closer “Excuse.” Jessica applies her rustic and soothing musical style to renditions of Simon &amp; Garfunkel’s “The Boxer,” CCR’s “Lodi” and the Hank Williams-popularized “My Bucket’s Got a Hole in It.” As the latter half of a live performance double-shot following her original song “Make Me a Pallet on Your Floor,” Jessica also sings a rendition of Bob Dylan’s classic “Tangled Up in Blue.” Jessica’s mild voice is front and center throughout the album, and the simple arrangements

allow her words to come through clearly and uncluttered. The sound quality and mix are consistent throughout the album, and the overall sound is direct, balanced and full. Soul Searcheroffers a broad glimpse into Jessica Illuzzi’s pleasant musical world, and provides a soothing, uplifting listen. JELLI – JELLI WITH AN I (no label) Those old enough to remember may recall the story of national recording group Green Jelly; they started out as Green Jello, but

Kraft Foods sued them over use of the Jello name in 1992, forcing them to change the name to Green Jellÿ. No such controversy figures into how Harrisburg’s Jelli arrived at the spelling of their band name and title of their album, Jelli With an I. The group was formed in 2016 by lead singer, guitarist and kazoo player J Sumner and percussionist Shelli Merriford; thus Jelli is the blending of their first names. Combined with bass player and guitarist Jeff Burfield, Jelli reveals their distinctive and unpredictable style and sound over the 10 tracks of Jelli With an

The Pennsylvania Musician Magazine is a FREE Publication delivered throughout the state of PA. We are THE magazine for not only the people who MAKE music, but also for the people who LOVE music. We encourage our readers to Support Local Music.