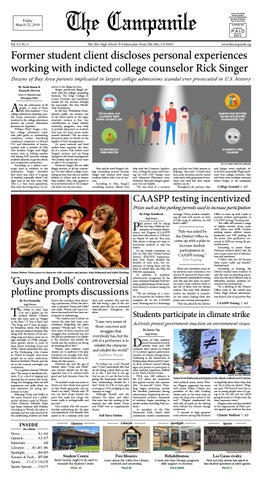 fter the indictment of 50 people — some of them Palo Alto residents — in a college admissions cheating scandal, many community members involved in the college admissions process say current admissions practices are imperfect. William “Rick” Singer, a forhire college admissions coach who pled guilty to racketeering conspiracy, money laundering conspiracy, conspiracy to defraud U.S. and obstruction of justice, worked with a number of Palo Alto families. Singer used illegal means, such as bribing coaches and having SAT proctors change students’ answers, to get his clients into competitive universities. According to a phone transcript used as evidence in the indictment, Singer described how every year there is “a group of families, especially where I am right now in the Bay Area, Palo Alto (...) they want guarantees, they want this thing done,” in ref-

erence to his illegal services. Singer performed illegal services with his college counseling business, The Edge College &amp; Career Network, and transferred money for the services through his non-profit, The Key Worldwide Foundation. In the Key Worldwide Foundation’s public tax returns, one of the listed points in the organization’s mission is that “our contributions to major athletic university programs, may help to provide placement to students that may not have access under normal channels.” The tax return document gives no details on the legality of such arrangements. As many national and local outlets have reported, the family of a current Paly student used Singer’s services and are being charged in the fraud investigation. The student said he did not want to talk to The Campanile. However, Singer did not offer illegal services to all his customers. He also offered college counseling services that did not involve bribery to clients such as former Paly student Alex, who agreed to be interviewed only if The Campanile didn&#39;t use his real name.

The scandal has allegedly been going on since 2011

help with the Common Application, editing his essays and tutoring for SAT, SAT Subject tests and Advanced Placement tests. However, Alex said Singer’s guidance was not helpful. “He was kind of a scummy

guy and had very little process in helping,” Alex said. “I would send him essay revisions, and he would come back with grammatical mistakes and stuff like that, which anyone can do.” Throughout the process, Alex

said Singer never explicitly offered him potentially illegal pathways into college; however, Alex said there were multiple instances where Singer or his employees

he 1950s in New York City was a golden era for musical theatre. Classics from this time, such as “Singin’ in the Rain,” “A Star is Born” and “The King and I” were all popular Broadway shows that helped the musical industry flourish. But along with the beauty of the dazzling song and dance, some see an ugly reminder of 1950s misogynistic gender norms in some of these shows including “Guys and Dolls,” which premiered this year at The Performing Arts Center on March 8. Despite what some people see as sexist undertones, director Kathleen Woods said the art in the musical outweighs any controversy. “It is a golden musical,” Woods said. “The music is absolutely fantastic. It is a kind of singing and dancing that no matter how much things are changing, these are still experiences and skills (that) are very important for young performers to have.” Selecting “Guys and Dolls” as this year’s musical was a collaborative decision made by Woods, Choir Director Michael Najar and Band Director Jeff Willner. According to Woods, the talent is available and the roles that best fit the auditioning students are both

factors she considers when choosing a production. When the decision to perform “Guys and Dolls” was made, Woods said some students discussed with her their reservations in auditioning. “The students and I, before we started the play, had some conversations (regarding the play’s sexism),” Woods said. “So I was very aware of those concerns and struggles that everybody has, but the job of a performer is to inhabit the character and inhabit the world, and the students are doing an amazing job of that.” Woods said students could choose not to audition if the play interfered too strongly with their beliefs and some chose not to audition for this reason. However, she said the age of theatre when “Guys and Dolls&quot; was written should not be disregarded even if it contains both good and bad elements from the past. “It wouldn&#39;t make any sense to throw out that whole time period or that whole generation and say there&#39;s no value,” Woods said. “If you can kind of get beyond the parts that make you cringe, the music really is unforgettable and just fun.” One student who felt uncomfortable auditioning for the play was sophomore Zoe Russell, who opted to be a makeup artist and

deck crew member. She said she felt that being a part of the cast would open her up to unwanted objectification throughout the show.

&quot;I was very aware of those concerns and struggles that everybody has, but the job of a performer is to inhabit the character and inhabit the world.” Kathleen Woods “It bothers me a lot,” Russell said. “I don&#39;t particularly like that we are doing a show that&#39;s as sexist as this. I feel that at the age that we are, it&#39;s not the best to be giving the impression that that&#39;s how relationships should be. I don&#39;t think it&#39;s OK to have girls as young as 14 be stripping in any capacity on stage.” Although Russell said she admires the talent and effort that went into the making of the musical, she still thinks “Guys and Dolls” was an inappropriate choice.

aly juniors will be taking the two-day California Assessment of Student Performance and Progress (CAASPP) tests from after lunch to 3:30 p.m. on March 25 and 26. This year, Paly admin is taking new steps to incentivize students to take the exams. In his weekly newsletter on Feb. 22, Palo Alto Unified School District (PAUSD) Superintendent Don Austin detailed the benefits of such tests, the importance of taking them and the ways in which they can help the PAUSD community. In addition to academic achievements recognized by the state, Assistant Principal Tom Keating notified juniors of the incentives offered to students taking the tests. “We are working on a number of incentives for students who complete all of the CAASPP tests,” Keating said in a Schoology

message. “Every student completing all tests will receive an item of Paly swag. In addition, we will hold a raffle.”

&quot;Paly was asked by the District Office to come up with a plan to increase student participation in CAASPP testing.&quot; Tom Keating These new incentives come after previous years attendance was around 25 percent for these stateadministered standardized testing over the past few years. In previous years, many students chose to opt out of these tests for various reasons. This year, Paly administration has decided to incentivize test takers, hoping these new prizes may increase participation. “Paly was asked by the District

Office to come up with a plan to increase student participation in CAASPP testing,” Keating said. The raffle will contain a range of highly coveted items, some with values over $100. Student parking passes, athletic passes, yearbooks and VIP parking for the junior class graduation ceremony in 2020 are among the potential prizes. According to senior Esme Stotland, students didn’t take the tests in past years lack of information and incentives. “I didn&#39;t take the test because there wasn’t really any benefit,” Stotland said. According to Keating, the District wanted more students to take the tests, so providing incentives was the most efficient way to effectively increase students excitement for participation. “In a meeting at the District Office early in the school year, Gunn High School administrators shared a list of incentives they

ozens of Paly students joined thousands of youth activists from over 120 countries after school on March 15 to protest against government inaction on climate change issues. Gathering at the intersection of Embarcadero Road and El Camino Real, students carried rallying signs and posters to participate in what national organizers dubbed as the Youth Climate Strike. With over 100 walkouts in the U.S. alone, the movement first gained traction last summer after 16-year-old Greta Thunberg began protesting outside the Swedish parliament during school hours. Inspired by her environmental activism, thousands of students began partaking in similar strikes, including Paly students. As president of the Paly Democrats Club, which often coordinates student involvement

Senior Evan Baldonado participates in the climate walkout on El Camino. with political issues, senior Warren Wagner organized the event with junior Rohin Ghosh, vice president of the club. Leading chants such as “no more coal, no more oil, keep your carbon in the soil,” Wagner emphasized the vital role of youth as the driving force behind the climate change movement. “I wanted to help generate some interest among Paly students

to hopefully show them what they can do to help our planet,” Wagner said. “We kind of own this issue as young people since it’s going to be our life and our world going forward, so I think we’re the most important voice.” Wagner, who was also involved in the organization of Paly’s protest against gun violence last year,

Bond money ought to be used to remodel the Student Center. PAGE A5

Learn about the Little Free Library network and ownership. PAGE B1

A look into how therapy programs offer support to recovery. PAGE B4-B5

Find out why admin has opted to ban student spectators at select games. PAGE C1 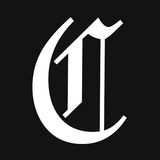