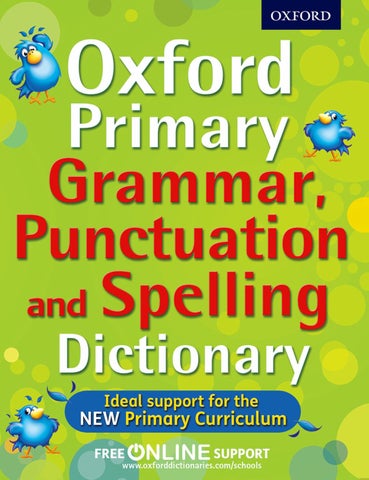 We use words to communicate and we use grammar to organize the words. Every word in a sentence has a job to do. If the grammar of a sentence is correct, then the meaning will be clear.

Word classes Words can do different jobs depending on their word class, or part of speech. Adjectives, nouns and verbs are all examples of different word classes.

green bird That my apple took.

These words are all muddled up! It should say: That green bird took my apple. The words in the sentence need to work together to make the meaning clear. The word ‘green’ is an adjective. The word ‘bird’ is a noun and most sentences have a noun or a pronoun. The word ‘took’ is a verb.

See page 24 for more on tenses.

A verb often (but not always) names an action. The bird pecks the apple and eats it. The bird is happy.

If you can make a word into a past tense, it is a verb. The bird is happy because he likes apples.

An adjective gives more information about a noun. It often goes before the noun or after is, am, are, was or were. The little, green bird pecked the juicy apple. The apple was delicious.

A noun names a person or thing. The bird pecked the apple.

noun is a noun that refers to people or things in general.

A proper noun is a noun that identifies a particular person, place or thing. Proper nouns begin with capital letters. James

An uncountable noun cannot be plural, but a countable one can. Jim spent his pocket money on the tickets.

A pronoun can be used instead of a noun. Using a pronoun avoids repeating the noun again and again. The bird pecked the apple and ate it as he sat on a branch. The pronoun it replaces the words ‘the apple’.

The pronoun he replaces the words ‘the bird’.

Possessive pronouns tell you who something belongs to. This apple is mine!

The pronoun mine shows the apple belongs to the bird. More possessive pronouns: mine

You can leave out the relative pronoun that from some sentences, but not others.

Punctuation marks A full stop . comes at the end of a sentence. It shows that a sentence is complete and finished. It is a full sentence.

I am the tallest in my class.

I like swimming. More full stops: Let’s go to the park.

We are having lunch now.

You can text me later.

The bird likes to eat seeds.

ê paintings and sculptures, e.g. The Mona Lisa, Campbell’s Soup Cans, The Scream, David, The Angel of the North

Capital letters are used at the beginning of sentences.

Always use a capital letter when you use I to talk about yourself. I raised £100 for charity!

All I’ve ever wanted was a puppy.

The names of days and months are proper nouns, so they also start with a capital letter. Monday

A question a question.

comes at the end of a sentence which is asking

What is your favourite colour?

How old are you?

Are you coming to the cinema with us? How are you?

What time is it?

An exclamation mark ! comes at the end of an exclamation. It shows that something is being exclaimed, or said with a lot of feeling. I’m so late!

An exclamation mark can also come at the end of a command. A command is a sentence which gives an order or instruction. No!

Sit on the blue chair!

can be used to separate items in a list.

I like to eat apples, seeds, grapes and nuts.

I have a sister, a brother and a stepsister.

I ate an orange, an apple, and raspberries. This is called a serial, or Oxford, comma. In some texts, this is used throughout as a style.

can be used to change the meaning of a sentence.

I told him, honestly.

I told him honestly.

can be used to avoid

This sentence is ambiguous: it is not clear if both the jelly and the ice cream are for the sister. The comma makes it clear that the sister is only having ice cream.

can be used before a clause starting with or, and or but.

I like swimming, but I love ice skating! More commas: Did you paint this picture yourself, or did someone help you? We’re finishing dinner, and then we’re going to play a game. I like cats, but I love dogs!

is used after a subordinate clause at the start of a sentence.

is also used after a fronted adverbial.

With a shake, the dog dried itself off.

Luckily, I got out of the way in time!!

When Y6 came back from their trip, they were exhausted.

A comma , is used to separate the name of the person being spoken to from the rest of the sentence. Kids, dinner’s ready!

I love the following foods: apples, seeds, grapes and nuts.

More colons: There are three friends in the book: Harry, Ron and Hermione. We are going to need: knives, forks, spoons and glasses. They come in four colours: red, blue, yellow and green.

can be used to introduce examples or explanations.

The words after the colon give more information about what comes before it. The bird eats lots of snacks: he needs lots of energy for flying.

More colons: It is a big house: there are six bedrooms all with their own bathrooms. The rabbits are very furry: they need to keep warm in winter. My favourite colour is blue: it is the colour of my favourite team. See page 9 for more on nouns.

You don’t need to use a capital letter for the word that comes after a colon, unless it is a proper noun or the word ‘I’.

Spelling can be tricky! Think of the word you are spelling and how it sounds. To help you to spell it correctly, here are some spelling rules and strategies. Vowel letters are a, e, i, o, u.

Vowels and consonants The letters a, e, i, o and u are called vowel letters. They are in most words. They can make a short vowel sound or a long vowel sound. All other letters are called consonant letters.

How to spell the long vowel sounds a

Other letter groups can also make the /eɪ/ sound: the eigh in eight and neighbour and the ei in vein. The ae in ice cream sundae is an unusual spelling of the /eɪ/ sound.

At the end of a word, the letter y often makes a sound that is very similar to the long /i:/ sound. baby tummy silly happy

Different ways of spelling this sound: ie i_e igh i

At the end of a word, the commonest way of spelling the long /aɪ/ sound is the letter y. my by fly

For words like gym and mystery that have an ‘i’ sound in the middle, see page 91.

In height, ei makes this sound.

Lots of words are spelt with the letters -ough. Have a look at page 86 for the different sounds they can make.

clue flute cool crew to you through bruise super

tuna You is spelt with ou.

A noun names a person or thing. Words like apple, dog, team and chair are all nouns. One apple is singular. More than one is plural.

How do I say I want more than one apple?

The little bird has one apple on his head. There are lots of apples on the ground.

There are some tricky nouns that do not change at all to make the plural. one sheep → two sheep

Some words change their spelling completely to make the plural. child → children 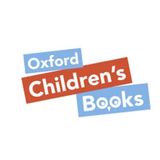 The Oxford Primary Grammar, Punctuation, and Spelling Dictionary is the essential reference book. In full colour, it has easy-to-use rules a...

The Oxford Primary Grammar, Punctuation, and Spelling Dictionary is the essential reference book. In full colour, it has easy-to-use rules a...