At a cellular level art making by children experiencing trauma 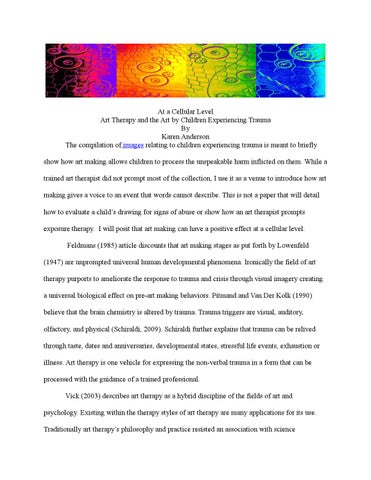 At a Cellular Level Art Therapy and the Art by Children Experiencing Trauma By Karen Anderson The compilation of images relating to children experiencing trauma is meant to briefly show how art making allows children to process the unspeakable harm inflicted on them. While a trained art therapist did not prompt most of the collection, I use it as a venue to introduce how art making gives a voice to an event that words cannot describe. This is not a paper that will detail how to evaluate a childâ&amp;#x20AC;&amp;#x2122;s drawing for signs of abuse or show how an art therapist prompts exposure therapy. I will posit that art making can have a positive effect at a cellular level. Feldmans (1985) article discounts that art making stages as put forth by Lowenfeld (1947) are unprompted universal human developmental phenomena. Ironically the field of art therapy purports to ameliorate the response to trauma and crisis through visual imagery creating a universal biological effect on pre-art making behaviors. Pitmand and Van Der Kolk (1990) believe that the brain chemistry is altered by trauma. Trauma triggers are visual, auditory, olfactory, and physical (Schiraldi, 2009). Schiraldi further explains that trauma can be relived through taste, dates and anniversaries, developmental states, stressful life events, exhaustion or illness. Art therapy is one vehicle for expressing the non-verbal trauma in a form that can be processed with the guidance of a trained professional. Vick (2003) describes art therapy as a hybrid discipline of the fields of art and psychology. Existing within the therapy styles of art therapy are many applications for its use. Traditionally art therapyâ&amp;#x20AC;&amp;#x2122;s philosophy and practice resisted an association with science

(Malchiodi, 1998a). Malchiodi (1998a) explains “that recently scientific research has shown how images influence emotion, thoughts, and well-being and how the brain and body react to the experience of drawing, painting, or other art activities” (p. 16). Art therapy attempts to reverse the effects of trauma by re-exposing the trauma victims to their experiences so their consciousness of the event can be reordered in a way that is manageable (Steele, 2003). Drawings provide children with the tools to convey stories with their viewpoints to aid the therapist in unpacking the trauma. Malchiodi (1998b) explains that the therapist can step into the child’s world though the drawings and allow the child to teach him/her about the meanings (p. 43). The element of play and appreciation for art making is intrinsic to the success of using drawings for therapeutic experiences with children (Malchiodi, 1998b). The art shown in the Pinterest collection is comprised of work from a variety of countries and historical events. The children range in age from five to sixteen. Both sexes are represented. The art making created by children experiencing trauma is portrayed in charcoal, ink, graphite, colored pencil and marker. The children living in the Gaza Strip experienced continued bombing that interrupted their school year and were prompted by a visiting artist to draw the events. It is interesting that most of the war zone art work shown in this Pinterest collection consistently show flags. The inclusion of the flags amplifies and identifies the cause of the trauma. The dispute over who owns the land and who should be living there is an ever present thought in their daily lives. The code red alerts are very similar to the duck and cover nuclear attack drills of the late American 1950’s. The children have been living under these threats for as long as some of them have been alive.

The drawings of the children from Darfur, Sudan, show government supported invaders attacking villagers. The drawings are mostly from a birds-eye view. This is possibly how the children that drew the pictures can distance themselves from the horror in order to portray it. The children portray overwhelming weapons against unarmed villagers as a common theme in most the drawings The drawings from the Spanish Civil War, the exportation of Jews to death camps, the woman from Hiroshima, and the Darfur drawings all show displacement and murder of large groups of people through acts of war. Some of the artists did not live very long after their drawings were made. The poignancy of a drawing made by someone who did not survive the event pictured is very powerful. Traumatic events breach the basic trust of family, community or society as a whole (Herman, 1992). The drawings in the collection show the childrenâ&amp;#x20AC;&amp;#x2122;s sense of safety in the world has been broken.. Herman (1992) states the trauma also undermines belief systems that give meaning to human experience and violate the victims faith in the natural or divine order of their world. Understanding how drawings are connected to emotional and cognitive experiences is shown to help in decreasing the effects of the trauma (Rankin &amp; Taucher, 2003). The remaining images in the collection that do not relate to war, genocide or sexual abuse deal with children using art to accept physical limitations. The girl who uses art to create a memory of her soon to be amputated leg and the boy with conduct disorder find peace and acceptance of themselves through their art making. So are the goals and results of and for the art making included in this collection to document history so the memory of genocide does not fade? To bring a voice to those that cannot speak the unspeakable. There is also another fundamental goal of art making for the traumatized. Through art therapy a victim can find a

decrease in intensity and frequency of negative aftereffects to improve daily functioning and increase a positive enhanced well-being (Rankin &amp; Taucher, 2003). Childrenâ&amp;#x20AC;&amp;#x2122;s art is what is inside of them produced outwardly without a filter. It is more reliable than a camera in documenting their reality. We should all spend much more time looking at childrenâ&amp;#x20AC;&amp;#x2122;s art. They will teach us many things we have forgotten.

At a cellular level art making by children experiencing trauma

As humans we all share a common biology in our body. Additionally, within our mind is a positive or negative cellular reaction to sensory stimuli. Shown are images from children experiencing trauma or crisis and the similarity of their artistic response across culture and time. Art therapists use art as a partnership to ameliorate the effects of trauma. My website with research brief and more information- http://www.artoutofdakota.com/study-of-youth-created-art.html