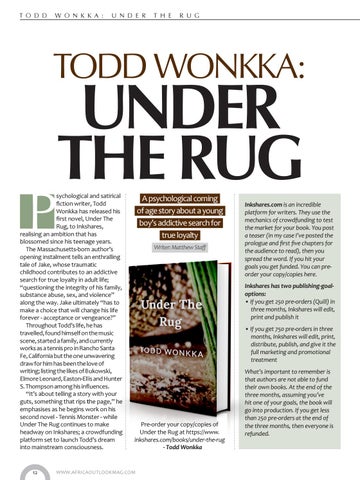 sychological and satirical fiction writer, Todd Wonkka has released his first novel, Under The Rug, to Inkshares, realising an ambition that has blossomed since his teenage years. The Massachusetts-born author’s opening instalment tells an enthralling tale of Jake, whose traumatic childhood contributes to an addictive search for true loyalty in adult life; “questioning the integrity of his family, substance abuse, sex, and violence” along the way. Jake ultimately “has to make a choice that will change his life forever - acceptance or vengeance?” Throughout Todd’s life, he has travelled, found himself on the music scene, started a family, and currently works as a tennis pro in Rancho Santa Fe, California but the one unwavering draw for him has been the love of writing; listing the likes of Bukowski, Elmore Leonard, Easton-Ellis and Hunter S. Thompson among his influences. “It’s about telling a story with your guts, something that rips the page,” he emphasises as he begins work on his second novel - Tennis Monster - while Under The Rug continues to make headway on Inkshares; a crowdfunding platform set to launch Todd’s dream into mainstream consciousness.

Inkshares.com is an incredible platform for writers. They use the mechanics of crowdfunding to test the market for your book. You post a teaser (in my case I’ve posted the prologue and first five chapters for the audience to read), then you spread the word. If you hit your goals you get funded. You can preorder your copy/copies here. Inkshares has two publishing-goaloptions: • If you get 250 pre-orders (Quill) in three months, Inkshares will edit, print and publish it • If you get 750 pre-orders in three months, Inkshares will edit, print, distribute, publish, and give it the full marketing and promotional treatment

Pre-order your copy/copies of Under the Rug at https://www. inkshares.com/books/under-the-rug - Todd Wonkka 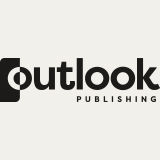