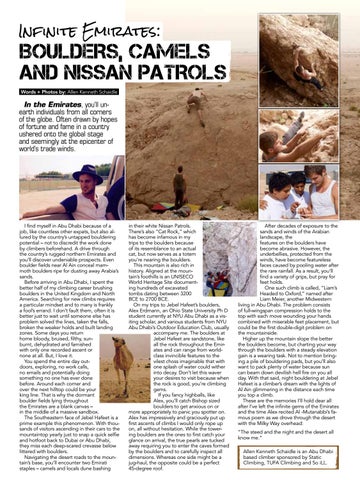 In the Emirates, you’ll unearth individuals from all corners of the globe. Often drawn by hopes of fortune and fame in a country ushered onto the global stage and seemingly at the epicenter of world’s trade winds.

I find myself in Abu Dhabi because of a job, like countless other expats, but also allured by the country’s untapped bouldering potential – not to discredit the work done by climbers beforehand. A drive through the country’s rugged northern Emirates and you’ll discover undeniable prospects. Even boulder fields near Al Ain conceal mammoth boulders ripe for dusting away Arabia’s sands. Before arriving in Abu Dhabi, I spent the better half of my climbing career brushing boulders in the United Kingdom and North America. Searching for new climbs requires a particular mindset and to many is frankly a fool’s errand. I don’t fault them, often it is better just to wait until someone else has problem solved the lines, taken the falls, broken the weaker holds and built landing zones. Some days you return home bloody, bruised, filthy, sunburnt, dehydrated and famished with only one recorded ascent or none at all. But, I love it. You spend the entire day outdoors, exploring, no work calls, no emails and potentially doing something no one has ever done before. Around each corner and over the next hilltop could be your king line. That is why the dormant boulder fields lying throughout the Emirates are a blank canvas – in the middle of a massive sandbox. The Southeastern face of Jebel Hafeet is a prime example this phenomenon. With thousands of visitors ascending in their cars to the mountaintop yearly just to snap a quick selfie and hotfoot back to Dubai or Abu Dhabi, they miss each deep-scared crevasse below littered with boulders. Navigating the desert roads to the mountain’s base, you’ll encounter two Emirati staples – camels and locals dune bashing

in their white Nissan Patrols. There’s also “Cat Rock,” which has become infamous in my trips to the boulders because of its resemblance to an actual cat, but now serves as a totem you’re nearing the boulders. This mountain is also rich in history. Aligned at the mountain’s foothills is an UNISECO World Heritage Site documenting hundreds of excavated tombs dating between 3200 BCE to 2700 BCE. On my trips to Jebel Hafeet’s boulders, Alex Erdmann, an Ohio State University Ph D student currently at NYU Abu Dhabi as a visiting scholar, and various students from NYU Abu Dhabi’s Outdoor Education Club, usually accompany me. The boulders at Jebel Hafeet are sandstone, like all the rock throughout the Emirates and can range from worldclass invincible features to the vilest choss imaginable that with one splash of water could wither into decay. Don’t let this waver your desires to visit because when the rock is good, you’re climbing gems. If you fancy highballs, like Alex, you’ll catch Bishop sized boulders to get anxious on or more appropriately to panic you spotter on. Alex has impressively and graciously put up first ascents of climbs I would only rope up on, all without hesitation. While the towering boulders are the ones to first catch your glance on arrival, the true pearls are tucked away requiring you to enter the caves formed by the boulders and to carefully inspect all dimensions. Whereas one side might be a jug-haul, the opposite could be a perfect 45-degree roof.

After decades of exposure to the sands and winds of the Arabian landscape, the features on the boulders have become abrasive. However, the underbellies, protected from the winds, have become featureless faces caused by pooling water after the rare rainfall. As a result, you’ll find a variety of grips, but pray for feet holds. One such climb is called, “Liam’s Headed to Oxford,” named after Liam Meier, another Midwestern living in Abu Dhabi. The problem consists of full-wingspan compression holds to the top with each move wounding your hands combined with miserable feet placement, but could be the first double-digit problem on the mountainside. Higher up the mountain slope the better the boulders become, but charting your way through the boulders with a steady elevation gain is a wearing task. Not to mention bringing a pile of bouldering pads, but you’ll also want to pack plenty of water because sun can beam down devilish hell fire on you all day. With that said, night bouldering at Jebel Hafeet is a climber’s dream with the lights of Al Ain glimmering in the distance each time you top a climb. These are the memories I’ll hold dear all after I’ve left the infinite gems of the Emirates and the time Alex recited Al -Mutanabbi’s famous poem as we drove through the desert with the Milky Way overhead: &quot;The steed and the night and the desert all know me.&quot; Allen Kenneth Schaidle is an Abu Dhabi based climber sponsored by Static Climbing, TUFA Climbing and So iLL.

This month of February, show your love for the outdoors. Hit the ground running because it’s marathon season once again, and we have the roundup of races and obstacle runs around the region. In the mountains, Emirati Hanady Alhashmi summits Aconcagua, and down below Baxter and friends go on spelunking expedition in Oman. On the waters, the EFG Sailing Arabia The Tour is back, while Leigh and family go paddleboarding in Thailand. Plus, we tested the Columbia OutDry Extreme Eco jacket and talked to the first Saudi woman to summit Mt Everest, Raha Moharrak and registration is open for the Al Adaid Desert Cycling Challenge in Qatar. 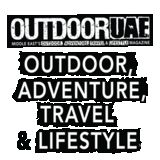