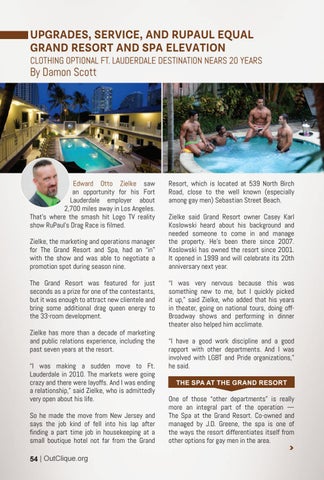 Edward Otto Zielke saw an opportunity for his Fort Lauderdale employer about 2,700 miles away in Los Angeles. That’s where the smash hit Logo TV reality show RuPaul’s Drag Race is filmed. Zielke, the marketing and operations manager for The Grand Resort and Spa, had an “in” with the show and was able to negotiate a promotion spot during season nine. The Grand Resort was featured for just seconds as a prize for one of the contestants, but it was enough to attract new clientele and bring some additional drag queen energy to the 33-room development. Zielke has more than a decade of marketing and public relations experience, including the past seven years at the resort. “I was making a sudden move to Ft. Lauderdale in 2010. The markets were going crazy and there were layoffs. And I was ending a relationship,” said Zielke, who is admittedly very open about his life. So he made the move from New Jersey and says the job kind of fell into his lap after finding a part time job in housekeeping at a small boutique hotel not far from the Grand 54 | OutClique.org

Resort, which is located at 539 North Birch Road, close to the well known (especially among gay men) Sebastian Street Beach. Zielke said Grand Resort owner Casey Karl Koslowski heard about his background and needed someone to come in and manage the property. He’s been there since 2007. Koslowski has owned the resort since 2001. It opened in 1999 and will celebrate its 20th anniversary next year. “I was very nervous because this was something new to me, but I quickly picked it up,” said Zielke, who added that his years in theater, going on national tours, doing offBroadway shows and performing in dinner theater also helped him acclimate. “I have a good work discipline and a good rapport with other departments. And I was involved with LGBT and Pride organizations,” he said. THE SPA AT THE GRAND RESORT

One of those “other departments” is really more an integral part of the operation — The Spa at the Grand Resort. Co-owned and managed by J.D. Greene, the spa is one of the ways the resort differentiates itself from other options for gay men in the area. 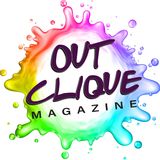