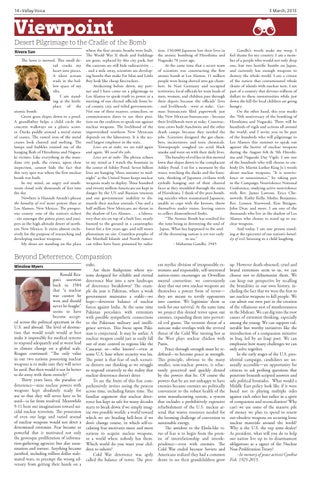 Viewpoint Desert Pilgrimage to the Cradle of the Bomb Rivera Sun The lawn is mowed. This small detail cracks my heart into pieces. A silent scream wails in the hollow space of my ribs. I am standing at the birthplace of the atomic bomb. Green grass slopes down to a pond. A grandfather helps a child circle the concrete walkways on a plastic scooter. Ducks paddle around a metal statue of cranes. The rusted iron of the metal cranes look charred and melting. The lumps and bubbles remind me of the hanging flesh of Hiroshima and Nagasaki victims. Like everything in the mundane city park, the cranes, upon close inspection, cannot hide the fact that this very spot was where the first nuclear bomb was built. In my mind, an angry red mushroom cloud roils thousands of feet into the sky. Nowhere is Hannah Arendt’s phrase the banality of evil more potent than at Los Alamos, New Mexico. The prosperous county -one of the nation’s richest - sits amongst the piñon pines and junipers in the high-altitude desert of northern New Mexico. It exists almost exclusively for the purpose of researching and developing nuclear weapons. My shoes are standing on the place

where the first atomic bombs were built. The World War II sheds and buildings are gone, replaced by this city park, but the canyons are still hide radioactivity . . . and a mile away, scientists are developing bombs that make Fat Man and Little Boy look like cheap firecrackers. Awakening before dawn, my partner and I have come on a pilgrimage to Los Alamos to speak truth to power at a meeting of our elected officials from local county, city, and tribal governments. Not one of these mayors, councilors, or commissioners dares to use their position on the coalition to speak out against nuclear weapons. The livelihood of the impoverished northern New Mexicans depends on the laboratory. It is the second largest employer in the state. Lives are at stake, we are told again and again. We need the jobs. Lives are at stake. The phrase echoes in my mind as I watch the fountain in the center of Ashley Pond. Seven billion lives are hanging “three minutes to midnight” as the United States keeps nuclear weapons ready to deploy. Three hundred and twenty million Americans are kept in danger by the US and Russian tensions and our governments’ inability to dismantle their nuclear arsenals. One and a half million New Mexicans are thrust in the shadow of Los Alamos . . . a laboratory that sits on top of a fault line, nearly burned to the ground in a catastrophic forest fire a few years ago, and still stores plutonium on site. Countless peoples of the Marshall Islands and North American tribes have been poisoned by radia-

tion. 150,000 Japanese lost their lives in the atomic bombing of Hiroshima and Nagasaki 70 years ago. At the same time that a secret team of scientists was constructing the first atomic bomb at Los Alamos, 11 million people were being shoved into gas chambers. In Nazi Germany and occupied territories, local officials let train loads of men, women, and children pass through their depots because the officials’ lives - and livelihoods - were at stake. German bureaucrats filed paperwork just like New Mexican bureaucrats - because their livelihoods were at stake. Construction crews built Auschwitz and the other death camps, because they needed the jobs. Scientists designed the gas chambers, incinerators, and toxic chemicals. Townspeople coughed on acrid black smoke and went on with their daily lives. The banality of evil lies in this mowed lawn that slopes down to the complacent Ashley Pond. I sit for a moment by the water, watching the ducks and the fountain, thinking of Japanese civilians with eyeballs hanging out of their charred faces as they stumbled through the ruins of Hiroshima. I think of the post-bombing suicides when traumatized Japanese, unable to cope with the horrors, threw themselves under trains, leaving sisters to collect dismembered limbs. “The Atomic Bomb has resulted for the time being in destroying the soul of Japan. What has happened to the soul of the destroying nation is yet too early to see.” - Mahatma Gandhi, 1945

Gandhi’s words make me weep. I feel shame for my country. I am a member of a people who would not only drop one, but two horrific bombs on Japan, and currently has enough weapons to destroy the whole world. I am a citizen of the nation that contaminated whole chains of islands with nuclear tests. I am part of a country that devotes trillions of dollars to these monstrosities while just down the hill the local children are going hungry. On the other hand, this year marks the 70th anniversary of the bombing of Hiroshima and Nagasaki. There will be hundreds of vigils and actions all around the world, and I invite you to be part of the hundreds who will pilgrimage to Los Alamos this summer to speak out against the horror of nuclear weapons during the August 6th & 9th Hiroshima and Nagasaki Day Vigils. I am one of the hundreds who will choose to embody Dr. Martin Luther King Jr.’s words about nuclear weapons, “It is nonviolence or nonexistence,” by taking part in the Campaign Nonviolence National Conference, studying active nonviolence with Rev. James Lawson, Erica Chenoweth, Kathy Kelly, Medea Benjamin, Rev. Lennox Yearwood, Ken Butigan, John Dear, and more. I am one of the thousands who live in the shadow of Los Alamos who choose to stand up to nuclear weapons. And today, I am one person standing at the epicenter of our nation’s banality of evil, listening to a child laughing.

ent mythic division of irresponsible extremists and responsible, self-interested nation-states encourages an Orwellian mental contortion: we conveniently deny that our own nuclear weapons are themselves a potent form of terror— they are meant to terrify opponents into caution. We legitimize them as tools for our survival. At the same time we project this denied terror upon our enemies, expanding them into perverted evil giants. The terrorist threat of a suitcase nuke overlaps with the revived threat of the Cold War turning hot as the West plays nuclear chicken with Putin. Peace through strength must be redefined—to become peace as strength. This principle, obvious to the many smaller, non-nuclear powers, is reluctantly perceived and quickly denied by the powers that be. Of course the powers that be are not unhappy to have enemies because enemies are politically convenient to the robust health of the arms manufacturing system, a system that includes a prohibitively expensive refurbishment of the U.S. nuclear arsenal that wastes resources needed for the looming challenge of conversion to sustainable energy. The antidote to the Ebola-like virus of fear is to begin from the premise of interrelationship and interdependence—even with enemies. The Cold War ended because Soviets and Americans realized they had a common desire to see their grandchildren grow

up. However death-obsessed, cruel and brutal extremists seem to us, we can choose not to dehumanize them. We can keep our perspective by recalling the brutalities in our own history, including the fact that we were the first to use nuclear weapons to kill people. We can admit our own part in the creation of the villainous nest of murderousness in the Mideast. We can dig into the root causes of extremist thinking, especially among the young. We can support vulnerable but worthy initiatives like the introduction of a compassion initiative in Iraq, led by an Iraqi poet. We can emphasize how many challenges we can only solve together. In the early stages of the U.S. presidential campaign, candidates are unusually accessible—an opportunity for citizens to ask probing questions that penetrate beneath scripted answers and safe political bromides. What would a Middle East policy look like if it were based not in playing multiple sides against each other but rather in a spirit of compassion and reconciliation? Why can’t we use some of the massive pile of money we plan to spend to renew our obsolete weapons on securing loose nuclear materials around the world? Why is the U.S. the top arms dealer? As president, what will you do to help our nation live up to its disarmament obligations as a signer of the Nuclear Non-Proliferation Treaty? ~In memory of peace activist Cynthia Fisk, 1925-2015.

Ronald Reagan’s assertion back in 1984 that “a nuclear war cannot be won and should never be fought” seems to have become accepted across the political spectrum in the U.S. and abroad. The level of destruction that would result would at best make it impossible for medical systems to respond adequately and at worst lead to climate change on a global scale. Reagan continued: “The only value in our two nations possessing nuclear weapons is to make sure they will never be used. But then would it not be better to do away with them entirely?” Thirty years later, the paradox of deterrence—nine nuclear powers with weapons kept absolutely ready for use so that they will never have to be used—is far from resolved. Meanwhile 9-11 bent our imaginations toward suicidal nuclear terrorism. The possession of even our large and varied arsenal of nuclear weapons would not deter a determined extremist. Fear became so powerful that it motivated not only the grotesque proliferation of information-gathering agencies but also assassination and torture. Anything became justified, including trillion dollar stalemated wars, to preempt the wrong adversary from getting their hands on a

nuke. Are there flashpoints where systems designed for reliable and eternal deterrence blur into a new landscape of deterrence breakdown? The example du jour is Pakistan, where a weak government maintains a stable—we hope—deterrent balance of nuclear forces against India. At the same time Pakistan percolates with extremists with possible sympathetic connections to the Pakistani military and intelligence services. This focus upon Pakistan is conjectural. It may be unfair. A nuclear weapon could just as easily fall out of state control in regions like the Caucasus or—who knows?—even at some U.S. base where security was lax. The point is that fear of such scenarios distorts our thinking as we struggle to respond creatively to the reality that nuclear deterrence doesn’t deter. To see the fruits of this fear comprehensively invites seeing the process across time, including future time. The familiar argument that nuclear deterrence has kept us safe for many decades starts to break down if we simply imagine two possible worlds: a world toward which we are heading hell-bent if we don’t change course, in which self-escalating fear motivates more and more nations to acquire nuclear weapons, or a world where nobody has them. Which world do you want your children to inherit? Cold War deterrence was aptly called the balance of terror. The pres-