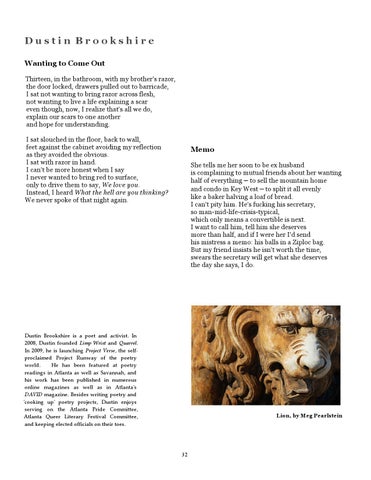 Dustin Brookshire Wanting to Come Out Thirteen, in the bathroom, with my brother&#39;s razor, the door locked, drawers pulled out to barricade, I sat not wanting to bring razor across flesh, not wanting to live a life explaining a scar even though, now, I realize that&#39;s all we do, explain our scars to one another and hope for understanding. I sat slouched in the floor, back to wall, feet against the cabinet avoiding my reflection as they avoided the obvious. I sat with razor in hand. I can&#39;t be more honest when I say I never wanted to bring red to surface, only to drive them to say, We love you. Instead, I heard What the hell are you thinking? We never spoke of that night again.

Memo She tells me her soon to be ex husband is complaining to mutual friends about her wanting half of everything â&amp;#x20AC;&amp;#x201C; to sell the mountain home and condo in Key West â&amp;#x20AC;&amp;#x201C; to split it all evenly like a baker halving a loaf of bread. I can&#39;t pity him. He&#39;s fucking his secretary, so man-mid-life-crisis-typical, which only means a convertible is next. I want to call him, tell him she deserves more than half, and if I were her I&#39;d send his mistress a memo: his balls in a Ziploc bag. But my friend insists he isn&#39;t worth the time, swears the secretary will get what she deserves the day she says, I do.

Dustin Brookshire is a poet and activist. In 2008, Dustin founded Limp Wrist and Quarrel. In 2009, he is launching Project Verse, the selfproclaimed Project Runway of the poetry world. He has been featured at poetry readings in Atlanta as well as Savannah, and his work has been published in numerous online magazines as well as in Atlanta&#39;s DAVID magazine. Besides writing poetry and &#39;cooking up&#39; poetry projects, Dustin enjoys serving on the Atlanta Pride Committee, Atlanta Queer Literary Festival Committee, and keeping elected officials on their toes. 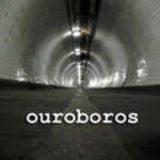