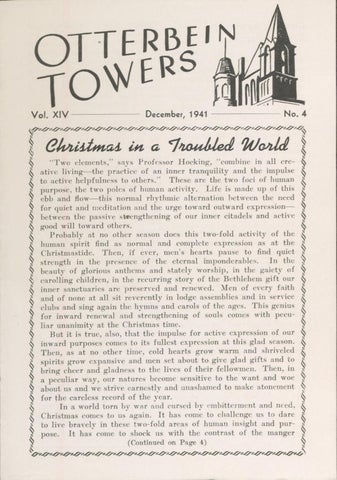 I QU/liiimai. Ut a ^nx^Mied Wo^ild | ^ “Two elements/’ says Professor Hoeking*^ “eombine in all ere- &amp; ^ ative living—the praetiee of an inner tranquility and the impulse \ ? to active helpfulness to others.” These are the two foci of Imman r ? purpose, the two poles of human activity. Life is made up of this ? ebb and flow—^this normal rhythmie alternation between the need J V for quiet and meditation and the urge toward outward expression— y \ between the passive strengthening of our inner citadels and active § &amp; good will toward others. ^ ^ Probably at no other season does this two-fold activity of the ^ ? human spirit And as normal and complete expression as at the r ^ Christmastide. Theip if ever^ men&#39;s hearts pause to find quiet J strength in the presence of the eternal imi)onderables. In the y § beauty of glorious anthems and stately worship, in the gaiety of V ^ carolling children^ in the recurring story of the Bethlehem gift our &amp; ^ inner sanctuaries are j)rcserved and renewed. ^len of every faith ^ and of none at all sit reverently in lodge assemblies and in service ^ clubs and sing again the hymns and carols of the ages. This genius ? for inward renewal and strengthening of souls comes with pecu- ^ liar unanimity at the Christmas time. y But it is true, also, that the impulse for active expression of our § inward purposes comes to its fullest expression at this glad season. ^ Then, as at no other time, cold hearts grow warm and shriveled ^ spirits grow expansive and men set about to give glad gifts and to bring cheer and gladness to the lives of their fellowmen. Then, in a peculiar way, our natures become sensitive to the want and woe about us and we strive earnestly and unashamed to make atonement for the careless record of the year. In a world torn by war and cursed by (‘mbitterment and need, ^ Christmas comes to us again. It has come to challenge us to dare r to live bravely in these two-fold areas of human insight and pur- ? pose. It has come to shock us with the contrast of the manger j (Continued on Page 4) y

Cardinal Teams on Victory March The history making series of vietories which the Cardinal eleven elialkcd up in the recent football se.ison has added new en­ thusiasm to the loyal Otterbeinites who for several seasons past have not had the cause for cheering that this year afforded. In five of the eight games which they played, our team came out on top, scoring a total of 172 points to the opponents 76. The r(‘cord of victories is as follows: Otterbein 14 Oberlin 12 12 Bluffton 0 41 Marietta 0 26 Capital 6 59 Ashland 0 This schedule includes several scores which have s])eeial signi­ ficance to Otterbein football fans, for instance the Marietta win breaks a five-year run of de­ feats from this southern Ohio scliool; the last victory over Marietta being in 1936. One spec­ tator at this Homecoming game remarked that the 41 tally gave Otterbein ;i touchdown for every year of defeat and oru* over for good nu&#39;asure. Defeat of Capital is, of course, always an occasion for great rejoicing because of the keen competition which exists be­ tween Otterbein and the Columbus school. This victory brings with it the return of the much cherished cup which is the symbol of the spirit of competition which exists between these colleges. The cup has been conspicuous by its absence from Otterbein’s campus for the past seven years. The CapitalPage 2

Otterbein ratio of victories is now Capital 8 and Otterbein 7. These victories now become a matter for pleasant reminiscence as we go into the heated competition of the current basketball season. To date, the Cardinal basketball quintet has a balanced record of one victory and one defeat; win­ ning over Cedarville to the tune of 59 to 25 and losing to Wilming­ ton by the margin of 49 to 64. Coach Selby is faced with much the same condition in his basket­ ball team as was prevalent on the football squad: that is of having only a few returning lettermen and a majority of underclassmen. Dick Rule, a senior from Lexing­ ton; Bob Raiea, a senior from Strasburg; Malcolm “Smokey’&#39; Williams, a junior from Commer­ cial Point, and Max Phillians. a junior from Ostrander, form the nucleus of a squad consisting of two seniors, two juniors and nine sophomores. In their opening clash with Cedarville on December 5, the boys did not exhibit the perfectly mechanized teamwork which comes from much ])laying together. They did, however, have all the makings of a great team; such a team as is developed only through the long hours of work which the squad puts in at the Alumni Gymnasium each afternoon.

ALUMNI NEWS: •’40 Mr. and Mrs. E. L. Bar­ tholomew of Branford, Connecti­ cut, announce the engagement of their daugliter, Marjorie E. Bar­ tholomew to C. Wendell King also of Branford. They plan to be mar­ ried some time next Spring. •’28 Verda Evans, journalism teacher at John Adams High School, Cleveland, was elected president of the Journalism Asso­ ciation of Ohio Schools at the recent meeting in Columbus. •’27 Reginald Alden Shipley was recently promoted from the position of Senior Instructor in Medicine at Western Reserve Uni­ versity to Assistant Professor in Medicine of that institution. •&#39;26 Rev. Emerson Bragg of H amilton recently received his M.A. degree in religion at Miami University. It is our understanding that this is the first M.A. given by Miami in this field. •’19 L. K. Replogle, assistant superintendent of Columbus schools and vice president of the Central Ohio Teachers’ associa­ tion for the past year, was elected president of that organization at the seventy-second annual conven­ tion on October 24 and 25. •’05-’06 Dr. and Mrs. B. F. Shively, former missionaries in Japan, who have been in the United States for the past year, liad received an appointment to a missionary station in the Pliilippine Islands, but due to the critical nature of the international situa­ tion, they were not able to leave for their new post.

•’91 We extend our deepest sym­ pathy to Dr. E. L. Weinland, for more than forty years Secretary of the Board of Trustees, in the loss of his wife. Mrs. Weinland died at their new home in Wester­ ville on December 11.

Christmas Quiz and Quill: The Christmas edition of the “Quiz and Quill’’ magazine, which is now off the press, is one of the most complete and original publi­ cations ever presented by this or­ ganization—complete because of the fact that there were more entries in the Quiz and Quill con­ test this yt‘ar than ever before, 24 in prose ;ind 41 in poetry. The winner of this contest was ^liss JeaniK&#39; Ackley of Columbus, who placed first in both poetry and prose—original because the cover of the magazine was designed and manufactured on the Otterbein campus. Tlu* artists were Miss Betty Woodworth and Miss Ruthanna Shuck, both members of the Quiz and Quill club, and the man­ ufacturer was the Otterbein Crafts Guild. Editor Marjorie Miller and Business Manager Wilma Creamer were kept quite busy making selec­ tions for the inclusion in the maga­ zine and carrying out last minute details, but they were well re­ warded by the large sales. It was necessary to order extra copies to meet the student demand, but there are still a very few copies which will be available to those alumni who are especially inter­ ested in this club. They may be had by sending 25e to the alumni office of the College.

Entered as second class matter at post office in Westerville, Ohio, under act of Ausnist 24, 1912

Christmas in a Troubled World (Continued from Page 1) scene and our bomb-torn civiliza­ tion. In our folly and our strife Christmas has come again to chide us. But let it come! Let it shame us out of our modern pagan ways. Let it mock our lack of faith and hope and love. If that could haj)pen to us all this holy season then the power that transformed an ancient pagan world would be re­ leased anew to redeem the Vvoes of nations and of men. The Christmas faith is a pro­ phetic faith. It is always repu­ diating defeat, always claiming victory^ always pressing forward into impossible triumphs. More­ over the Christmas faith is a cos­ mic faith. Peace and goodwill for all mankind are caught up into a single breath of song. Then let Christmas come again, with its carols and its bells, but more than that with its challenge and its dreams, to re-echo in our vagrant hearts the piercing cry of a world weary for peace and brotherhood, that at some long last men shall find the wisdom and the grace to dwell together as children of a common God. J. R. Howe

Births: Newcomers wdio Santa Claus will have on his list for the first time til is Christmas are James Smith Toedtman^ whose arrival on December 1 is being announced by his parents, Mr. and Mrs. James Toedtman (Ella B. Smith, ’36); the new’ daughter born to Mr. and Mrs. John Barnes, ex-’31, on No­ vember 13; the son of Rev. and Mrs. George Parkinson, ’35, who arrived on November 27; and Donald Ray Martin II, who was born on November 22. Donald is a real Otterbeinite, being the son of Mr. and Mrs. Donald Ray Mar­ tin, ’37 (Katherine Newton, ’37) and the grandson of Prof, and Mrs. R. F. Martin, ’14-’22 and of Mrs. Howard M. Newton (Anna Baker ’98).