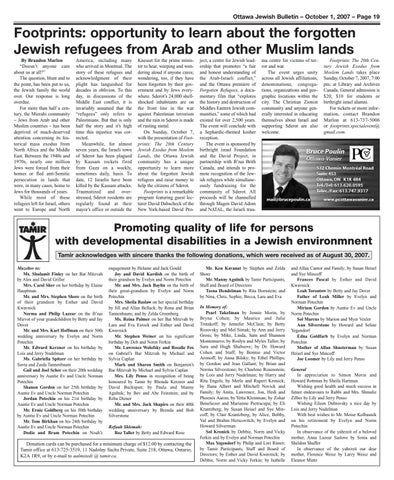 Footprints: opportunity to learn about the forgotten Jewish refugees from Arab and other Muslim lands By Brandon Marlon “Doesn’t anyone care about us at all?” The question, blunt and to the point, has been put to us, the Jewish family the world over. Our response is long overdue. For more than half a century, the Mizrahi community – Jews from Arab and other Muslim countries – has been deprived of much-deserved attention concerning its historical mass exodus from North Africa and the Middle East. Between the 1940s and 1970s, nearly one million Jews were forced from their homes or fled anti-Semitic persecution in lands that were, in many cases, home to Jews for thousands of years. While most of these refugees left for Israel, others went to Europe and North

America, including many who arrived in Montreal. The story of these refugees and acknowledgment of their plight has languished for decades in oblivion. To this day, in discussions of the Middle East conflict, it is invariably assumed that the “refugees” only refers to Palestinians. But that is only half the story and it’s high time this injustice was corrected. Meanwhile, for almost seven years, the Israeli town of Sderot has been plagued by Kassam rockets fired from Gaza on a weekly, sometimes daily, basis. To date, 12 Israelis have been killed by the Kassam attacks. Traumatized and overstressed, Sderot residents are regularly found at their mayor’s office or outside the

Knesset for the prime minister to hear, weeping and wondering aloud if anyone cares; wondering, too, if they have been forgotten by their government and by Jews everywhere. Sderot’s 24,000 shellshocked inhabitants are on the front line in the war against Palestinian terrorism and the rain in Sderot is made of rusting metal. On Sunday, October 7, with the presentation of Footprints: The 20th Century Jewish Exodus from Moslem Lands, the Ottawa Jewish community has a unique opportunity to learn more about the forgotten Jewish refugees and raise money to help the citizens of Sderot. Footprints is a remarkable program featuring guest lecturer David Dabscheck of the New York-based David Pro-

ject, a centre for Jewish leadership that promotes “a fair and honest understanding of the Arab-Israeli conflict,” and the Ottawa premiere of Forgotten Refugees, a documentary film that “explores the history and destruction of Middles Eastern Jewish communities,” some of which had existed for over 2,500 years. The event will conclude with a Sephardic-themed kosher reception. The event is sponsored by birthright israel Foundation and the David Project, in partnership with B’nai Brith Canada, and intends to promote recognition of the Jewish refugees while simultaneously fundraising for the community of Sderot. All proceeds will be channelled through Magen David Adom and NATAL, the Israeli trau-

ma centre for victims of terror and war. The event urges unity across all Jewish affiliations, denominations, congregations, organizations and geographic locations within the city. The Christian Zionist community and anyone generally interested in educating themselves about Israel and supporting Sderot are also welcome.

engagement by Helaine and Jack Gould Joy and David Kardish on the birth of their grandson by Evelyn and Norm Potechin Mr. and Mrs. Jack Baylin on the birth of their great-grandson by Evelyn and Norm Potechin Mrs. Sheila Baslaw on her special birthday by Jill and Allan Bellack; by Rona and Brian Tannenbaum; and by Zelda Greenberg Ms. Reina Palmer on her Bat Mitzvah by Lara and Eva Esrock and Esther and David Kwavnick Mr. Stephen Weiner on his significant birthday by Deb and Norm Ferkin Mr. Lawrence Wolofsky and Rosalie Fox on Gabriel’s Bar Mitzvah by Michael and Sylvia Caplan Mark and Sharon Smith on Benjamin’s Bar Mitzvah by Michael and Sylvia Caplan Mrs. Lily Penso in recognition of being honoured by Tamir by Rhonda Kerzner and David Buckspan; by Paula and Manny Agulnik; by Bev and Abe Feinstein; and by Reba Diener Mr. and Mrs. Jack Shapiro on their 40th wedding anniversary by Brenda and Bob Silverstone Refuah Shlemah: Roz Taller by Betty and Edward Rose

Mr. Ken Kavanat by Stephen and Zelda Shore Mr. Manny Agulnik by Tamir Participants, Staff and Board of Directors Teena Hendelman by Rita Hornstein; and by Nina, Chris, Sophie, Becca, Lara and Eva In Memory of: Pearl Takefman by Jennie Morin; by Bryna Cohen; by Maurice and Julie Tretakoff; by Jennifer McClain; by Betty Rozovsky and Mel Simak; by Ann and Jerry Gross; by Mike, Linda, Sam and Shannon Montemurro; by Roslyn and Myles Taller; by Sara and Hugh Shabsove; by Dr. Howard Cohen and Staff; by Bonnie and Victor Aronoff; by Anna Bilsky; by Ethel Phillips; by Gordon and Jean Gallant; by Brian and Norma Silverstone; by Charlene Rosenstein; by Lois and Jerry Nudelman; by Harry and Rita Engels; by Merle and Rupert Kronick; by Ilana Albert and Mitchell Novick and Family; by Anita, Lawrence, Jon, Hedi and Phoenix Aaron; by Yetta Kleinman; by Zohar Beneliezer and Marianne Pietracupa; by Eli Krantzberg; by Susan Heisel and Sye Mincoff; by Clair Krantzberg; by Alice, Bobby, Val and Brahm Herscovitch; by Evelyn and Howard Silverman Sol Kronick by Debbie, Norm and Vicky Ferkin and by Evelyn and Norman Potechin Max Yegendorf by Philip and Lori Rimer; by Tamir Participants, Staff and Board of Directors; by Esther and David Kwavnick; by Debbie, Norm and Vicky Ferkin; by Isabelle

and Allan Cantor and Family; by Susan Heisel and Sye Mincoff Frances Pascal by Esther and David Kwavnick Leah Torontow by Betty and Jay Dover Father of Leah Miller by Evelyn and Norman Potechin Miriam Gordon by Auntie Ev and Uncle Norm Potechin Sol Marcus by Marion and Myer Vexler Ann Silverstone by Howard and Seline Yegendorf Edna Goldfarb by Evelyn and Norman Potechin Mother of Allan Shusterman by Susan Heisel and Sye Mincoff Joe Loomer by Lily and Jerry Penso General In appreciation to Simon Morin and Howard Rottman by Sheila Hartman Wishing good health and much success in future endeavours to Rabbi and Mrs. Shmulie Zilber by Lily and Jerry Penso Wishing Eileen Dubrovsky a nice day by Lois and Jerry Nudelman With best wishes to Mr. Moise Kolbasnik on his retirement by Evelyn and Norm Potechin In observance of the yahrzeit of a beloved mother, Anna Lazear Saslove by Sonia and Sheldon Shaffer In observance of the yahrzeit our dear mother, Florence Weisz by Larry Weisz and Eleanor Mintz More from The Ottawa Jewish Bulletin