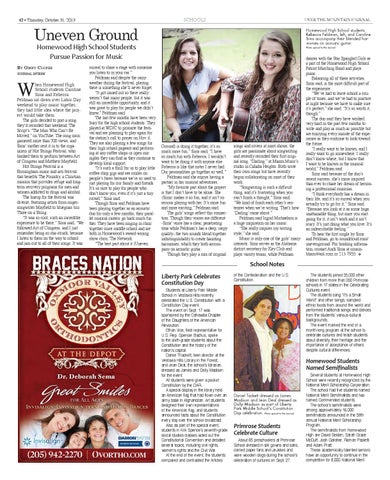 OVER THE MOUNTAIN Journal

hen Homewood High School students Caroline Sims and Rebecca Feldman sat down over Labor Day weekend to play music together, they had little idea where the project would take them. The girls decided to post a song they’d recorded that weekend, The Script’s “The Man Who Can’t Be Moved,” on YouTube. The song soon garnered more than 700 views, and Sims’ mother sent it in to the organizers of Hot Strings Festival, who booked them to perform between Act of Congress and Matthew Mayfield. Hot Strings Festival is a Birmingham music and arts festival that benefits The Foundry, a Christian mission that provides refuge and longterm recovery programs for men and women addicted to drugs and alcohol. The lineup for the festival was diverse, featuring artists from singersongwriter Mayfield to bluegrass trio Three on a String. “It was so cool, such an incredible experience to be there,” Sims said, “We followed Act of Congress, and I just remember being so star-struck, because I listen to them on the way to school and jam out to all of their songs. It was

surreal to share a stage with someone you listen to in your car.” Feldman said despite the rainy weather during the festival, playing there is something she’ll never forget. “It got rained out so there really weren’t that many people, but it was still an incredible opportunity, and it was great to play for people we didn’t know,” Feldman said. The last few months have been very busy for the high school students. They played at WDJC to promote the festival and are planning to play again for the station’s call to prayer on Nov. 6. They are also playing a few songs for their high school pageant and performing at any coffee shops or open mic nights they can find as they continue to develop local support.  “It’s such a thrill for us to play little coffee shop gigs and see smiles on people’s faces because we’re so used to just playing for our family and friends. It’s so nice to play for people who don’t know you, even if it’s just a tiny crowd,” Sims said. Though Sims and Feldman have been playing together as an acoustic duo for only a few months, their parallel musical careers go back much further. They have been singing in choir together since middle school and are both in Homewood’s award-wining show choir, The Network.  “The best part about it (Uneven

Photo special to the Journal

Ground) is doing it together, it’s so much more fun,” Sims said, “I have so much fun with Rebecca; I wouldn’t want to be doing it with anyone else. Rebecca is like that sister I never had. Our personalities go together so well.” Feldman said she enjoys having a partner in her musical adventures. “My favorite part about the project is that I don’t have to be alone. She (Sims) makes it so fun, and it isn’t so serious playing with her. It’s more fun and more exciting,” Feldman said.  The girls’ songs reflect this connection. Though their voices are different-Sims’ voice has a clear, penetrating tone while Feldman’s has a deep, raspy quality--the two sounds blend together indistinguishably to create haunting harmonies, which they both accompany on acoustic guitar.  Though they play a mix of original

songs and covers at most shows, the girls are passionate about songwriting and recently recorded their first original song, “Darling,” at Mason Music’s studio in Cahaba Heights. Both write their own songs but have recently begun collaborating on most of their work. “Songwriting is such a difficult thing, and it’s frustrating when you can’t finish a thought,” Sims said, “We kind of finish each other’s sentences when we’re writing. That’s how ‘Darling’ came about.” Feldman said Ingrid Michaelson is a huge inspiration on her music. “She really inspires my writing style,” she said. Music is only one of the girls’ many interests. Sims serves as the Alabama district secretary for Key Club and plays varsity tennis, while Feldman

dances with the Star Spangled Girls as a part of the Homewood High School Patriot Marching Band and plays piano. Balancing all of these activities, Sims said, is the most difficult part of the experience.  “We’ve had to leave school a couple of times, and we’ve had to practice at night because we have to make sure it’s perfect,” she said. “It’s so worth it, though.”  The duo said they have worked very hard in the past few months to write and play as much as possible but are enjoying every minute of the experience as they continue to look toward the future. “I really want to be known, and I really want to go somewhere. I really don’t know where, but I know that I want to be known in the musical world,” Feldman said. Sims said because of the duo’s recent success, she’s more inspired than ever to chase her dream of becoming a professional musician. “I think everybody has a dream in their life, and it’s so surreal when you actually try to go for it,” Sims said. “Because you look at it as some huge, unattainable thing, but once you start going for it, it isn’t work and it isn’t scary. It’s just doing what you love. It’s an indescribable feeling.”  To hear the first single by Sims and Feldman, go to soundcloud.com/ unevenground. For booking information, contact Andi Sims at simsinbham@aol.com or 213-7955. ❖

School Notes Liberty Park Celebrates Constitution Day Students at Liberty Park Middle School in Vestavia Hills recently celebrated the U.S. Constitution with a Constitution Day event. The event on Sept. 17 was sponsored by the Cahawba Chapter of the Daughters of the American Revolution. Ethan Vice, field representative for U.S. Rep. Spencer Bachus, spoke to the sixth-grade students about the Constitution and the history of the nation’s capital. Daniel Thackett, teen director at the Vestavia Hills Library in the Forest, and Jean Deal, the school’s librarian, dressed as James and Dolly Madison for the event. All students were given a pocket Constitution by the DAR. A special display in the library held an American flag that had flown over an army base in Afghanistan. Art students designed their own representations of the American flag, and students announced facts about the Constitution every day over the school broadcast. Also as part of the special event, students in Kirk Spence’s seventh-grade social studies classes acted out the Constitutional Convention and debated several topics, including civil rights, women’s rights and the Civil War. At the end of the event, the students compared and contrasted the Articles

of the Confederation and the U.S. Constitution.

The students joined 35,000 other children from more than 260 Primrose schools in 17 states in the Celebrating Cultures event. The students sang “It’s a Small World” and other songs, sampled ethnic foods from around the world and performed traditional songs and dances from the students’ various cultural backgrounds. The event marked the end of a month-long program at the school to celebrate cultures and teach students about diversity, their heritage and the importance of acceptance of others despite cultural differences.

Primrose Students Celebrate Culture About 85 preschoolers at Primrose School dressed in silk gowns and saris, carried paper fans and ukuleles and wore wooden clogs during the school’s celebration of cultures on Sept. 27.