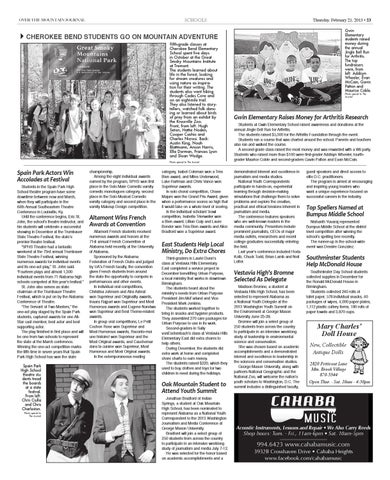 CHEROKEE BEND STUDENTS GO ON MOUNTAIN ADVENTURE Fifth-grade classes at Cherokee Bend Elementary School spent five days in October at the Great Smoky Mountains Institute at Tremont. The students learned about life in the forest, looking for stream creatures and using nature as inspiration for their writing. The students also went hiking through Cades Cove and on an eight-mile trail. They also listened to storytellers, watched folk dancing or learned about birds of prey from an exhibit by the Knoxville Zoo. Front, from left: Hugh Seton, Hattie Noden, Cooper Cashio and Charles Nicrosi. Back: Austin King, Noah Blattmann, Anson Harris, Ella Dorman, Frances Lyon and Sloan Wedge. Photo special to The Journal

Spain Park Actors Win Accolades at Festival Students in the Spain Park High School theatre program have some downtime between now and March, when they will participate in the 64th Annual Southeastern Theatre Conference in Louisville, Ky. Until the conference begins, Eric St. John, the school’s theatre instructor, and his students will celebrate a successful showing in December at the Trumbauer State Theatre Festival, the state’s premier theatre festival. “SPHS Theatre had a fantastic weekend at the 73rd annual Trumbauer State Theatre Festival, winning numerous awards for individual events and its one-act play,” St. John said. “Fourteen plays and almost 1,300 individual events from 71 Alabama high schools competed at this year’s festival.” St. John also serves as state chairman of the Trumbauer Theatre Festival, which is put on by the Alabama Conference of Theatre. “The Servant of Two Masters,” the one-act play staged by the Spain Park students, captured awards for one AllStar cast member, best actor and best supporting actor. The play finished in first place and will be one from two schools to represent the state at the March conference. Winning the one-act competition marks the fifth time in seven years that Spain Park High School has won the state Spain Park High School theatre students tread the boards at a state festival. From left: Chris Ciulla and Chris Charleston. Photo special to The Journal

East Students Help Local Ministry, Do Extra Chores Third-graders in Laurie Dunn’s class at Vestavia Hills Elementary East completed a service project in December benefitting Urban Purpose, a local ministry that works in downtown Birmingham. The students heard about the ministry’s needs from Urban Purpose President Jim McFarland and Vice President Mark Jenkins. The students worked together to bring in snacks and hygiene products. They assembled 270 care packages for Urban Purpose to use in its work. Second-graders in Sally vonEschenbach’s class at Vestavia Hills Elementary East did extra chores to help others. During December, the students did extra work at home and completed chore charts to earn money. The students raised $220, which they used to buy clothes and toys for two children in need during the holidays.

Oak Mountain Student to Attend Youth Summit Jonathan Bradford of Indian Springs, a student at Oak Mountain High School, has been nominated to represent Alabama as a National Youth Correspondent to the 2013 Washington Journalism and Media Conference at George Mason University. Bradford will join a select group of 250 students from across the country to participate in an intensive weeklong study of journalism and media July 7-12. He was selected for the honor based on academic accomplishments and a

Photo special to The Journal

Gwin Elementary Raises Money for Arthritis Research Students at Gwin Elementary School raised awareness and donations at the annual Jingle Bell Run for Arthritis. The students raised $5,300 for the Arthritis Foundation through the event. Students ran a course that was charted around the school. Parents and teachers also ran and walked the course. A second-grade class raised the most money and was rewarded with a Wii party. Students who raised more than $100 were first-grader Addisyn Wheeler, fourthgrader Maurice Coble and second-graders Gavin Patton and Evan McCain. demonstrated interest and excellence in journalism and media studies. National Youth Correspondents participate in hands-on, experiential learning through decision-making simulations that challenge them to solve problems and explore the creative, practical and ethical tensions inherent in journalism and media. The conference features speakers who are well-known leaders in the media community. Presenters include prominent journalists, CEOs of major media outlets, researchers and recent college graduates successfully entering the field. Last year’s conference included Hoda Kotb, Chuck Todd, Brian Lamb and Neil Leifer.

Vestavia High’s Bromne Selected As Delegate Madison Bromne, a student at Vestavia Hills High School, has been selected to represent Alabama as a National Youth Delegate at the 2013 Washington Youth Summit on the Environment at George Mason University June 23-28. Bromne will join a select group of 250 students from across the country to participate in an intensive weeklong study of leadership in environmental science and conservation. She was chosen based on academic accomplishments and a demonstrated interest and excellence in leadership in the sciences and conservation studies. George Mason University, along with partners National Geographic and the National Zoo, will welcome the nation’s youth scholars to Washington, D.C. The summit includes a distinguished faculty,

guest speakers and direct access to elite D.C. practitioners. The program is aimed at encouraging and inspiring young leaders who want a unique experience focused on successful careers in the industry.

994.6423 www.cahabamusic.com This is your AD PROOF from the OVER THE MO

Please make sure all informat including address and phon More from Over the Mountain Journal