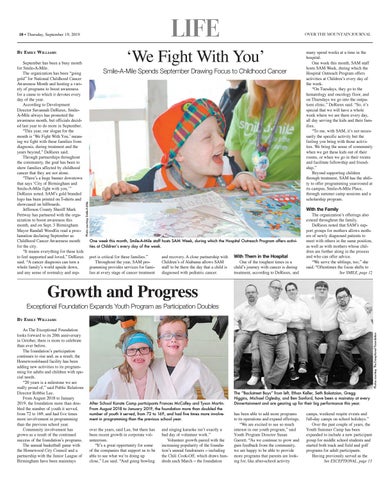 ‘We Fight With You’

September has been a busy month for Smile-A-Mile. The organization has been “going gold” for National Childhood Cancer Awareness Month and hosting a variety of programs to boost awareness for a cause to which it devotes every day of the year. According to Development Director Savannah DeRieux, SmileA-Mile always has promoted the awareness month, but officials decided last year to do more in September. “This year, our slogan for the month is ‘We Fight With You,’ meaning we fight with these families from diagnosis, during treatment and the years beyond,” DeRieux said. Through partnerships throughout the community, the goal has been to show families affected by childhood cancer that they are not alone. “There’s a huge banner downtown that says ‘City of Birmingham and Smile-A-Mile fight with you,’” DeRieux noted. SAM’s gold branded logo has been printed on T-shirts and showcased on billboards. Jefferson County Sheriff Mark Pettway has partnered with the organization to boost awareness this month, and on Sept. 3 Birmingham Mayor Randall Woodfin read a proclamation declaring September as Childhood Cancer Awareness month for the city. “It means everything for these kids to feel supported and loved,” DeRieux said. “A cancer diagnosis can turn a whole family’s world upside down, and any sense of normalcy and sup-

many spend weeks at a time in the hospital. One week this month, SAM staff hosts SAM Week, during which the Hospital Outreach Program offers activities at Children’s every day of the week. “On Tuesdays, they go to the hematology and oncology floor, and on Thursdays we go into the outpatient clinic,” DeRieux said. “So, it’s special that we will have a whole week where we are there every day, all day serving the kids and their families. “To me, with SAM, it’s not necessarily the specific activity but the feeling you bring with those activities. We bring the sense of community when we get these kids out of their rooms, or when we go in their rooms and facilitate fellowship and friendship.” Beyond supporting children through treatment, SAM has the ability to offer programming year-round at its campus, Smile-A-Mile Place, through summer camp sessions and a scholarship program.

One week this month, Smile-A-Mile staff hosts SAM Week, during which the Hospital Outreach Program offers activities at Children’s every day of the week.

port is critical for these families.” Throughout the year, SAM programming provides services for families at every stage of cancer treatment

and recovery. A close partnership with Children’s of Alabama allows SAM staff to be there the day that a child is diagnosed with pediatric cancer.

With Them in the Hospital

One of the toughest times in a child’s journey with cancer is during treatment, according to DeRieux, and

The organization’s offerings also extend throughout the family. DeRieux noted that SAM’s support groups for mothers allows mothers of newly diagnosed patients to meet with others in the same position, as well as with mothers whose children are further along in the process and who can offer advice. “We serve the siblings, too,” she said. “Oftentimes the focus shifts to

Exceptional Foundation Expands Youth Program as Participation Doubles As The Exceptional Foundation looks forward to its 20th anniversary in October, there is more to celebrate than ever before. The foundation’s participation continues to rise and, as a result, the Homewood-based facility has been adding new activities to its programming for adults and children with special needs. “20 years is a milestone we are really proud of,” said Public Relations Director Robbie Lee. From August 2018 to January 2019, the foundation more than doubled the number of youth it served, from 72 to 169, and had five times more involvement in programming than the previous school year. Community involvement has grown as a result of the continued success of the foundation’s programs. The annual basketball game with the Homewood City Council and a partnership with the Junior League of Birmingham have been mainstays

After School Karate Camp participants Frances McCalley and Tyson Martin. From August 2018 to January 2019, the foundation more than doubled the number of youth it served, from 72 to 169, and had five times more involvement in programming than the previous school year.

over the years, said Lee, but there has been recent growth in corporate volunteerism. “It’s a great opportunity for some of the companies that support us to be able to see what we’re doing up close,” Lee said. “And going bowling

and singing karaoke isn’t exactly a bad day of volunteer work.” Volunteer growth paired with the increasing popularity of the foundation’s annual fundraisers – including the Chili Cook-Off, which draws hundreds each March – the foundation

The “Backstreet Boys” from left, Ethan Keller, Seth Bokatzian, Gregg Higgins, Michael Oglesby, and Ben Sanford, have been a mainstay at every Dinnertainment and are gearing up for their big performance this year.

has been able to add more programs to its operations and expand offerings. “We are excited to see so much interest in our youth program,” said Youth Program Director Susan Garrett. “As we continue to grow and gain feedback from the community, we are happy to be able to provide more programs that parents are looking for, like after-school activity

camps, weekend respite events and full-day camps on school holidays.” Over the past couple of years, the Youth Summer Camp has been expanded to include a new participant group for middle school students and started both track and field and golf programs for adult participants. Having previously served as the See EXCEPTIONAL, page 13