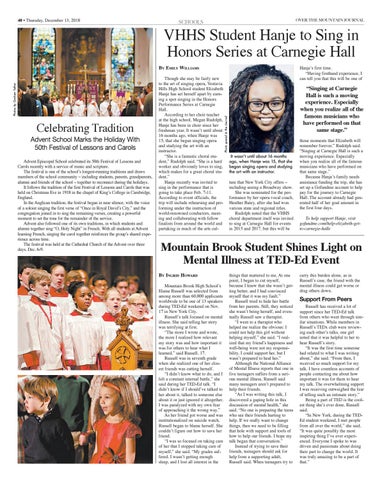 Advent School Marks the Holiday With 50th Festival of Lessons and Carols Advent Episcopal School celebrated its 50th Festival of Lessons and Carols recently with a service of music and scripture. The festival is one of the school’s longest-running traditions and draws members of the school community – including students, parents, grandparents, alumni and friends of the school – together to reconnect during the holidays. It follows the tradition of the first Festival of Lessons and Carols that was held on Christmas Eve in 1918 in the chapel of King’s College in Cambridge, England. In the Anglican tradition, the festival began in near silence, with the voice of a soloist singing the first verse of “Once in Royal David’s City,” and the congregation joined in to sing the remaining verses, creating a powerful moment to set the tone for the remainder of the service. Advent also followed one of its own traditions, in which students and alumni together sing “O, Holy Night” in French. With all students at Advent learning French, singing the carol together reinforces the group’s shared experience across time. The festival was held at the Cathedral Church of the Advent over three days, Dec. 6-9.

Though she may be fairly new to the art of singing opera, Vestavia Hills High School student Elizabeth Hanje has set herself apart by earning a spot singing in the Honors Performance Series at Carnegie Hall. According to her choir teacher at the high school, Megan Rudolph, Hanje has been in choir since her freshman year. It wasn’t until about 16 months ago, when Hanje was 15, that she began singing opera and studying the art with an instructor. “She is a fantastic choral student,” Rudolph said. “She is a hard worker and obviously loves to sing, which makes for a great choral student.” Hanje recently was invited to sing in the performance that is going to take place Feb. 7-11. According to event officials, the trip will include rehearsing and performing under the instruction of world-renowned conductors, meeting and collaborating with fellow finalists from around the world and partaking in much of the arts cul-

Hanje’s first time. “Having firsthand experience, I can tell you that this will be one of

“Singing at Carnegie Hall is such a moving experience. Especially when you realize all of the famous musicians who have performed on that same stage.”

Photo special to the Journal

It wasn’t until about 16 months ago, when Hanje was 15, that she began singing opera and studying the art with an instructor.

ture that New York City offers – including seeing a Broadway show. She was nominated for the performance by her opera vocal coach, Heather Batey, after she had won various state and regional titles. Rudolph noted that the VHHS choral department itself was invited to sing at Carnegie Hall for events in 2015 and 2017, but this will be

those moments that Elizabeth will remember forever,” Rudolph said. “Singing at Carnegie Hall is such a moving experience. Especially when you realize all of the famous musicians who have performed on that same stage.” Because Hanje’s family needs assistance funding the trip, she has set up a Gofundme account to help pay for the journey to Carnegie Hall. The account already had generated half of her goal amount in the first four days. To help support Hanje, visit gofundme.com/help-elizabeth-getto-carnegie-halle

Mountain Brook Student Shines Light on Mental Illness at TED-Ed Event By Ingrid Howard Mountain Brook High School’s Elaine Russell was selected from among more than 60,000 applicants worldwide to be one of 13 speakers during TED-Ed weekend on Nov. 17 in New York City. Russell’s talk focused on mental illness. She said telling her story was terrifying at first. “The more I wrote and wrote, the more I realized how relevant my story was and how important it was for others to hear what I learned,” said Russell, 17. Russell was in seventh grade when she realized one of her closest friends was cutting herself. “I didn’t know what to do, and I felt a constant internal battle,” she said during her TED-Ed talk. “I didn’t know if I should’ve talked to her about it, talked to someone else about it or just ignored it altogether. I was paralyzed with my own fear of approaching it the wrong way.” As her friend got worse and was institutionalized on suicide watch, Russell began to blame herself. She couldn’t figure out how to save her friend. “I was so focused on taking care of her that I stopped taking care of myself,” she said. “My grades suffered. I wasn’t getting enough sleep, and I lost all interest in the

things that mattered to me. At one point, I began to cut myself, because I knew that she wasn’t getting better, and I had convinced myself that it was my fault.” Russell tried to hide her battle from her parents. Still, they noticed she wasn’t being herself, and eventually Russell saw a therapist. “I went to a therapist who helped me realize the obvious: I could not help this girl without helping myself,” she said. “I realized that my friend’s happiness and well-being were not my responsibility. I could support her, but I wasn’t prepared to heal her.” Although the National Alliance of Mental Illness reports that one in five teenagers suffers from a serious mental illness, Russell said many teenagers aren’t prepared to help their friends. “As I was writing this talk, I discovered a gaping hole in this discussion of mental health,” she said. “No one is preparing the teens who see their friends hurting to help. If we really want to change things, then we need to be filling that hole with support and tools of how to help our friends. I hope my talk began that conversation.” Instead of trying to save their friends, teenagers should ask for help from a supporting adult, Russell said. When teenagers try to

carry this burden alone, as in Russell’s case, the friend with the mental illness could get worse or drag others down.

Russell has received a lot of support since her TED-Ed talk from others who went through similar situations. While members in Russell’s TEDx club were reviewing each other’s talks, one girl noted that it was helpful to her to hear Russell’s story. “It was the first time someone had related to what I was writing about,” she said. “From then, I received so much support for my talk. I have countless accounts of people contacting me about how important it was for them to hear my talk. The overwhelming support I was receiving outweighed the fear of telling such an intimate story.” Being a part of TED is the coolest thing she’s ever done, Russell said. “In New York, during the TEDEd student weekend, I met people from all over the world,” she said. “It was quite possibly the most inspiring thing I’ve ever experienced. Everyone I spoke to was driven and passionate about doing their part to change the world. It was truly amazing to be a part of that.”