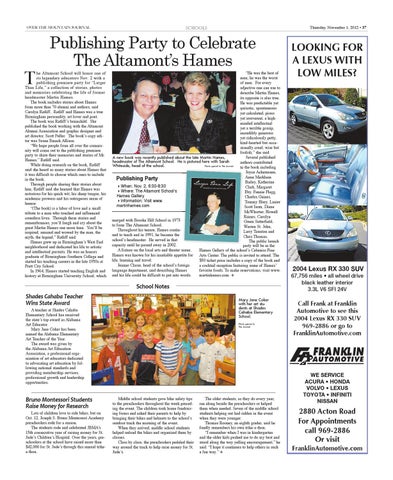 he Altamont School will honor one of its legendary educators Nov. 2 with a publishing premiere party for “Larger Than Life,” a collection of stories, photos and memories celebrating the life of former headmaster Martin Hames. The book includes stories about Hames from more than 70 alumni and authors, said Carolyn Ratliff. Ratliff said Hames was a true Birmingham personality, art lover and poet. The book was Ratliff’s brainchild. She published the book working with the Altamont Alumni Association and graphic designer and art director, Scott Fuller. The book’s copy editor was Susan Emack Allison. “We hope people from all over the community will come out to the publishing premiere party to share their memories and stories of Mr. Hames,” Ratliff said. While doing research on the book, Ratliff said she heard so many stories about Hames that it was difficult to choose which ones to include in the book. Through people sharing their stories about him, Ratliff said she learned that Hames was notorious for his quick wit, his sharp tongue, his academic prowess and his outrageous sense of humor. “(The book) is a labor of love and a small tribute to a man who touched and influenced countless lives. Through these stories and remembrances, you’ll laugh and cry about the great Martin Hames one more time. You’ll be inspired, amazed and wowed by the man, the myth, the legend,” Ratliff said. Hames grew up in Birmingham’s West End neighborhood and dedicated his life to artistic and intellectual pursuits. He was an honors graduate of Birmingham-Southern College and started his teaching careers in the late 1950s at Pratt City School. In 1964, Hames started teaching English and history at Birmingham University School, which

“He was the best of men; he was the worst of men. For every adjective one can use to describe Martin Hames, its opposite is also true. He was predictable yet quixotic, spontaneous yet calculated, pious yet irreverent, a highminded intellectual yet a terrible gossip, incredibly generous yet ridiculously petty, kind-hearted but occasionally cruel, wise but foolish,” she said. Several published A new book was recently published about the late Martin Hames, headmaster of The Altamont School. He is pictured here with Sarah authors contributed Photo special to The Journal Whiteside, head of the school. to the book including Joyce Ackermann, Anne Markham Publishing Party Bailey, Katherine When: Nov. 2, 6:30-8:30 Clark, Margaret Where: The Altamont School’s Eby, Fannie Flagg, Hames Gallery Charles Gaines, Information: Visit www. Tommy Huey, Lanier martinhames.com Scott Isom, Diane McWhorter, Howell Raines, Carolyn merged with Brooke Hill School in 1975 Green Satterfield, to form The Altamont School. Warren St. John, Throughout his tenure, Hames continLarry Taunton and ued to teach and in 1991, he became the Chris Thomas. school’s headmaster. He served in that The public launch capacity until he passed away in 2002. party will be in the A fixture on the local arts and theater scene, Hames Gallery of the school’s Cabaniss Fine Hames was known for his insatiable appetite for Arts Center. The public is invited to attend. The life, learning and travel. $50 ticket price includes a copy of the book and Jeanne Classe, head of the school’s foreign a cocktail reception featuring some of Hames’ favorite foods. To make reservations, visit www. language department, said describing Hames martinhames.com. ❖ and his life could be difficult to put into words.

A teacher at Shades Cahaba Elementary School has received the state’s top award as Alabama Art Educator. Mary Jane Coker has been named the Alabama Elementary Art Teacher of the Year. The award was given by the Alabama Art Education Association, a professional organization of art educators dedicated to advocating art education by following national standards and providing membership services, professional growth and leadership opportunities.

Lots of children love to ride bikes, but on Oct. 12, Joseph S. Bruno Montessori Academy preschoolers rode for a reason. The students rode and celebrated JBMA’s 15th consecutive year of raising money for St. Jude’s Children’s Hospital. Over the years, preschoolers at the school have raised more than $42,000 for St. Jude’s through this annual trikea-thon.

Photo special to The Journal

Middle school students gave bike safety tips to the preschoolers throughout the week preceding the event. The children took home fundraising forms and asked their parents to help by bringing their bikes and helmets to the school’s outdoor track the morning of the event. When they arrived, middle school students helped unload the bikes and organized them by classes. Class by class, the preschoolers pedaled their way around the track to help raise money for St. Jude’s.

The older students, as they do every year, ran along beside the preschoolers or helped them when needed. Seven of the middle school students helping out had ridden in the event when they were younger. Thomas Rooney, an eighth grader, said he fondly remembers his own trike-a-thon. “I remember when I was in kindergarten and the older kids pushed me to do my best and stood along the way yelling encouragement,” he said. “I hope it continues to help others in such a fun way.” ❖

lOOking FOR A lexus with lOw miles?