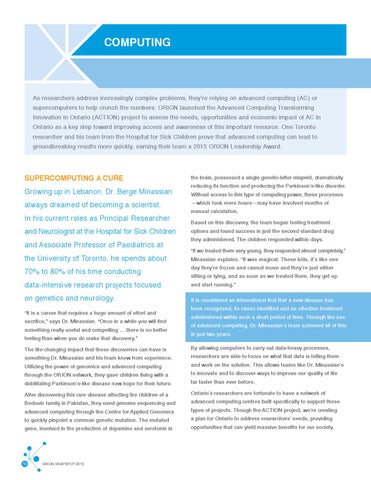 As researchers address increasingly complex problems, they’re relying on advanced computing (AC) or supercomputers to help crunch the numbers. ORION launched the Advanced Computing Transforming Innovation in Ontario (ACTION) project to assess the needs, opportunities and economic impact of AC in Ontario as a key step toward improving access and awareness of this important resource. One Toronto researcher and his team from the Hospital for Sick Children prove that advanced computing can lead to groundbreaking results more quickly, earning their team a 2013 ORION Leadership Award.

Without access to this type of computing power, these processes

always dreamed of becoming a scientist. In his current roles as Principal Researcher and Neurologist at the Hospital for Sick Children and Associate Professor of Paediatrics at the University of Toronto, he spends about

reducing its function and producing the Parkinson’s-like disorder. —which took mere hours—may have involved months of manual calculation.

Based on this discovery, the team began testing treatment

options and found success in just the second standard drug they administered. The children responded within days.

“If we treated them very young, they responded almost completely,” Minassian explains. “It was magical. These kids, it’s like one

on genetics and neurology. “It is a career that requires a huge amount of effort and

sacrifice,” says Dr. Minassian. “Once in a while you will find

something really useful and compelling … there is no better feeling than when you do make that discovery.”

The life-changing impact that these discoveries can have is

sitting or lying, and as soon as we treated them, they get up

It is considered an international first that a new disease has

been recognized, its cause identified and an effective treatment

administered within such a short period of time. Through the use

of advanced computing, Dr. Minassian’s team achieved all of this in just two years.

By allowing computers to carry out data-heavy processes,

something Dr. Minassian and his team know from experience.

through the ORION network, they gave children living with a

Utilizing the power of genomics and advanced computing

and work on the solution. This allows teams like Dr. Minassian’s

far faster than ever before.

After discovering this rare disease affecting the children of a

Ontario’s researchers are fortunate to have a network of

advanced computing through the Centre for Applied Genomics

types of projects. Though the ACTION project, we’re creating

gene, involved in the production of dopamine and serotonin in

opportunities that can yield massive benefits for our society.

Bedouin family in Pakistan, they used genome sequencing and

to quickly pinpoint a common genetic mutation. The mutated

a plan for Ontario to address researchers’ needs, providing 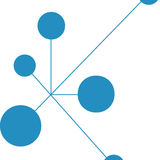