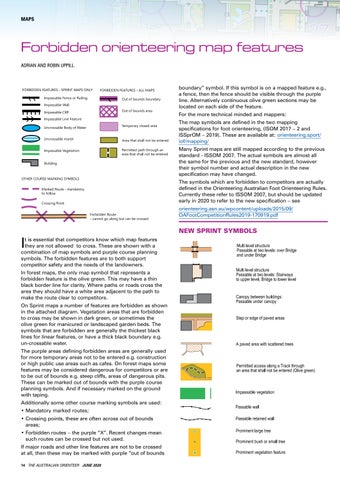 boundary” symbol. If this symbol is on a mapped feature e.g., a fence, then the fence should be visible through the purple line. Alternatively continuous olive green sections may be located on each side of the feature. For the more technical minded and mappers: The map symbols are defined in the two mapping specifications for foot orienteering, (ISOM 2017 – 2 and ISSprOM – 2019). These are available at: orienteering.sport/ iof/mapping/ Many Sprint maps are still mapped according to the previous standard - ISSOM 2007. The actual symbols are almost all the same for the previous and the new standard, however their symbol number and actual description in the new specification may have changed. The symbols which are forbidden to competitors are actually defined in the Orienteering Australian Foot Orienteering Rules. Currently these refer to ISSOM 2007, but should be updated early in 2020 to refer to the new specification – see orienteering.asn.au/wpcontent/uploads/2015/09/ OAFootCompetitionRules2019-170919.pdf

t is essential that competitors know which map features they are not allowed to cross. These are shown with a combination of map symbols and purple course planning symbols. The forbidden features are to both support competitor safety and the needs of the landowners. In forest maps, the only map symbol that represents a forbidden feature is the olive green. This may have a thin black border line for clarity. Where paths or roads cross the area they should have a white area adjacent to the path to make the route clear to competitors. On Sprint maps a number of features are forbidden as shown in the attached diagram. Vegetation areas that are forbidden to cross may be shown in dark green, or sometimes the olive green for manicured or landscaped garden beds. The symbols that are forbidden are generally the thickest black lines for linear features, or have a thick black boundary e.g. un-crossable water. The purple areas defining forbidden areas are generally used for more temporary areas not to be entered e.g. construction or high public use areas such as cafes. On forest maps some features may be considered dangerous for competitors or are to be out of bounds e.g. steep cliffs, areas of dangerous pits. These can be marked out of bounds with the purple course planning symbols. And if necessary marked on the ground with taping. Additionally some other course marking symbols are used: • Mandatory marked routes; •C rossing points, these are often across out of bounds areas; •F orbidden routes – the purple “X”. Recent changes mean such routes can be crossed but not used. If major roads and other line features are not to be crossed at all, then these may be marked with purple “out of bounds 14 THE AUSTRALIAN ORIENTEER JUNE 2020

A quarterly magazine from Orienteering Australia 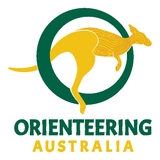