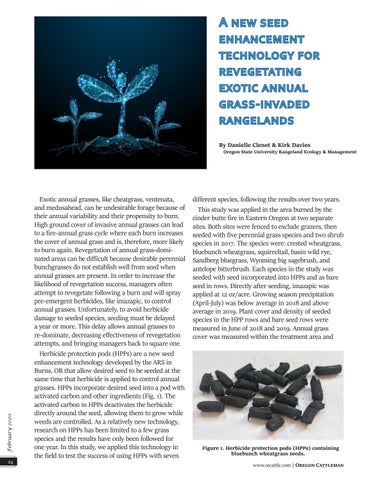 Exotic annual grasses, like cheatgrass, ventenata, and medusahead, can be undesirable forage because of their annual variability and their propensity to burn. High ground cover of invasive annual grasses can lead to a fire-annual grass cycle where each burn increases the cover of annual grass and is, therefore, more likely to burn again. Revegetation of annual grass-dominated areas can be difficult because desirable perennial bunchgrasses do not establish well from seed when annual grasses are present. In order to increase the likelihood of revegetation success, managers often attempt to revegetate following a burn and will spray pre-emergent herbicides, like imazapic, to control annual grasses. Unfortunately, to avoid herbicide damage to seeded species, seeding must be delayed a year or more. This delay allows annual grasses to re-dominate, decreasing effectiveness of revegetation attempts, and bringing managers back to square one. Herbicide protection pods (HPPs) are a new seed enhancement technology developed by the ARS in Burns, OR that allow desired seed to be seeded at the same time that herbicide is applied to control annual grasses. HPPs incorporate desired seed into a pod with activated carbon and other ingredients (Fig. 1). The activated carbon in HPPs deactivates the herbicide directly around the seed, allowing them to grow while weeds are controlled. As a relatively new technology, research on HPPs has been limited to a few grass species and the results have only been followed for one year. In this study, we applied this technology in the field to test the success of using HPPs with seven

different species, following the results over two years. This study was applied in the area burned by the cinder butte fire in Eastern Oregon at two separate sites. Both sites were fenced to exclude grazers, then seeded with five perennial grass species and two shrub species in 2017. The species were: crested wheatgrass, bluebunch wheatgrass, squirreltail, basin wild rye, Sandberg bluegrass, Wyoming big sagebrush, and antelope bitterbrush. Each species in the study was seeded with seed incorporated into HPPs and as bare seed in rows. Directly after seeding, imazapic was applied at 12 oz/acre. Growing season precipitation (April-July) was below average in 2018 and above average in 2019. Plant cover and density of seeded species in the HPP rows and bare seed rows were measured in June of 2018 and 2019. Annual grass cover was measured within the treatment area and