The view from Russia: Russia reacts to looming sanctions 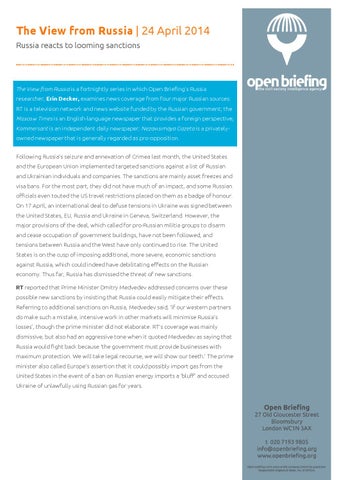 The View from Russia is a fortnightly series in which Open Briefing’s Russia researcher, Erin Decker, examines news coverage from four major Russian sources: RT is a television network and news website funded by the Russian government; the Moscow Times is an English-language newspaper that provides a foreign perspective; Kommersant is an independent daily newspaper; Nezavisimaya Gazeta is a privatelyowned newspaper that is generally regarded as pro-opposition. Following Russia’s seizure and annexation of Crimea last month, the United States and the European Union implemented targeted sanctions against a list of Russian and Ukrainian individuals and companies. The sanctions are mainly asset freezes and visa bans. For the most part, they did not have much of an impact, and some Russian officials even touted the US travel restrictions placed on them as a badge of honour. On 17 April, an international deal to defuse tensions in Ukraine was signed between the United States, EU, Russia and Ukraine in Geneva, Switzerland. However, the major provisions of the deal, which called for pro-Russian militia groups to disarm and cease occupation of government buildings, have not been followed, and tensions between Russia and the West have only continued to rise. The United States is on the cusp of imposing additional, more severe, economic sanctions against Russia, which could indeed have debilitating effects on the Russian economy. Thus far, Russia has dismissed the threat of new sanctions. RT reported that Prime Minister Dmitry Medvedev addressed concerns over these possible new sanctions by insisting that Russia could easily mitigate their effects. Referring to additional sanctions on Russia, Medvedev said, ‘if our western partners do make such a mistake, intensive work in other markets will minimise Russia’s losses’, though the prime minister did not elaborate. RT’s coverage was mainly dismissive, but also had an aggressive tone when it quoted Medvedev as saying that Russia would fight back because ‘the government must provide businesses with maximum protection. We will take legal recourse, we will show our teeth.’ The prime minister also called Europe’s assertion that it could possibly import gas from the United States in the event of a ban on Russian energy imports a ‘bluff’ and accused Ukraine of unlawfully using Russian gas for years.

Kommersant attributed a defiant tone to Russia’s reaction to the threat of Western sanctions. In an article matter-of-factly titled ‘China Supports Russia’, the newspaper reported that China has given Russia assurances that if any Western states impose sanctions, it will assist Russia with its ‘lagging commercial and economic components’. However, the comment, which was decidedly vague, was made within the framework of a previously scheduled bilateral economic discussion between the two countries, where they discussed several other, more specific areas of cooperation that were on the table prior to the recent unrest in Ukraine. While Kommersant portrayed the comment as a strong proclamation of support, the rest of the article did not reinforce this by including any specific information regarding what China would pledge to do to support Russia in the event of Western sanctions. Another Kommersant article also emphasised China’s supposed loyalty to Russia, and stated that China had strongly rebuffed US attempts to get it to join sanctions against Moscow: ‘China considered such pressure to be outrageous and rejected the idea of punishing Russians for Russia’s policy toward Ukraine.’ Kommersant portrayed China’s support of Russia as robust and unequivocal; however, this was in stark contrast to the other publications examined, such as the Moscow Times, which portrayed China as much more cautious and neutral in its behaviour toward Russia. The Moscow Times was the only publication examined that mentioned that Russia was attempting to ‘woo French business elite as the threat of tougher sanctions over the Ukraine crisis looms’. However, the article pointed out that such overtures were futile, given that French President Francois Hollande had already said that France would still be seeking ‘firm and graduated’ sanctions against Russia together with its European partners. However, the newspaper did report that Russia is trying to fight back any way it can over the last round of US sanctions and is considering filing a lawsuit against the United States with the World Trade Organisation (WTO) over sanctions against Russian banks. Several Russian banks, along with their chairs and other officials, were sanctioned as part of Washington’s punitive measures over Russia’s annexation of Crimea. Russia has said that it hopes ‘to use the mechanism of the WTO to keep our partners in check regarding this issue.’ Meanwhile, Nezavisimaya Gazeta reported that Ukraine is getting behind the West and actively encouraging the implementation of damaging sanctions on Russia. Meeting with US Vice President Joseph Biden, Ukrainian opposition leader Vitaliy Klichko said, ‘The West should immediately implement severe sanctions. They should encompass all sectors of the economy and be truly painful. Unfortunately, Russia’s leadership understands only the language of force.’ Comment While Russia had derisively brushed off the first rounds of Western sanctions, the Kremlin now appears to be displaying some genuine concern over the more severe sanctions the West is threatening to implement within the coming days if Russia does not cease interference in Ukraine and pull its troops back from the border. Pro-Kremlin media sources are doing their best to put up a strong front for Russia by running reassuring statements from government officials and playing up Russia’s relationships with its few allies, such as China. However, with capital flooding out of the country, its stock market falling and the rouble weakening, Russia is all too aware that a third round of economic sanctions could indeed have a devastating impact.

The view from Russia: Russia reacts to looming sanctions