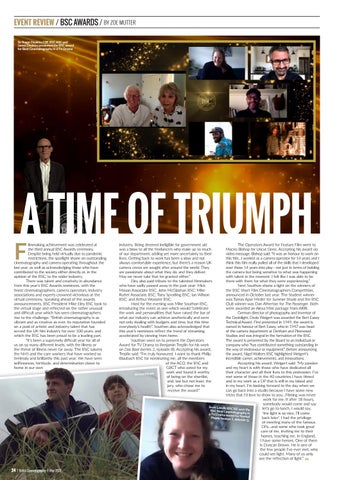 A TIME OF TRIUMPH

ilmmaking achievement was celebrated at the third annual BSC Awards ceremony. Despite being held virtually due to pandemic restrictions, the spotlight shone on outstanding cinematography and camera operating throughout the last year, as well as acknowledging those who have contributed to the society either directly or, in the opinion of the BSC, to the wider industry. There was talent and creativity in abundance from this year’s BSC Awards nominees, with the finest cinematographers, camera operators, industry associations and experts crowned victorious at the virtual ceremony. Speaking ahead of the awards announcements, BSC President Mike Eley BSC took to the virtual stage and reflected on the rather unusual and difficult year which has seen cinematographers rise to the challenge: “British cinematography is as vibrant and as creative as ever, its reputation founded on a pool of artistic and industry talent that has served the UK film industry for over 100 years, and which the BSC has been proud to be a leading part. “It’s been a supremely difficult year for all of us on so many different levels, with the illness or the threat of illness never far away. The BSC salutes the NHS and the care workers that have worked so tirelessly and brilliantly this past year. We have seen selflessness, fortitude, and determination closer to home in our own

industry. Being deemed ineligible for government aid was a blow to all the freelancers who make up so much of our department, adding yet more uncertainty to their lives. Getting back to work has been a slow and not always comfortable experience, but there’s a reason UK camera crews are sought after around the world. They are passionate about what they do, and they deliver. May we never take that for granted either.” Eley also paid tribute to the talented filmmakers who have sadly passed away in the past year: Mick Mason Associate BSC; John McGlashan BSC; Mike Rutter Associate BSC; Tony Spratling BSC; Ian Wilson BSC; and Arthur Wooster BSC. Host for the evening was Mike Southon BSC, introducing the event as one which would “celebrate the work and personalities that have raised the bar of what our industry can achieve aesthetically and were not only dealing with budgets and time, but this time everybody’s health”. Southon also acknowledged that this year’s nominees reflect the trend of streaming, accelerated by viewing from home. Southon went on to present the Operators Award for TV Drama to Benjamin Treplin for his work on Das Boot (series 2, episode 8). Accepting his award, Treplin said: “I’m truly honoured. I want to thank Philip Blaubach BSC for nominating me, all the members of the ACO, the BSC and GBCT who voted for my work and found it worthy Normal People of being on the shortlist, and, last but not least, the jury, who chose me to receive the award.”

The Operators Award for Feature Film went to Maceo Bishop for Uncut Gems. Accepting his award via video message, Bishop said: “It was an honour to work on this film…I worked as a camera operator for 14 years and I think this film really pulled all of the skills that I developed over those 14 years into play - not just in terms of holding the camera but being sensitive to what was happening with talent in the moment. I felt like I was able to be there with them for what they were experiencing.” Next Southon shone a light on the winners of the BSC Short Film Cinematographers Competition, announced in October last year. The Student winner was Tamas Apor Meder for Summer Shade and the BSC Club winner was Dan Atherton for The Passenger. Both were awarded an Alexa Mini package from ARRI. German director of photography and inventor of the Dedolight, Dedo Weigert was awarded the Bert Easey Technical Award. First presented in 1949, the award is named in honour of Bert Easey, who in 1947 was head of the camera department at Denham and Pinewood Studios and was integral in the formation of the BSC. The award is presented by the Board to an individual or company who “has contributed something outstanding in the way of endeavour or equipment”. Before announcing the award, Nigel Walters BSC highlighted Weigert’s incredible career, achievements, and innovations. Accepting his award, Weigert said: “My passion and my heart is with those who have dedicated all their character and all their lives to this profession. I’ve met some of those in the 40 countries I have filmed and in my work as a DP that is still in my blood and in my heart. I’m looking forward to the day when we can go back into a studio because I have some new tricks that I’d love to show to you…Filming was never work for me. If after 18 hours, somebody would come and say Suzie Lavelle BSC ISC won the let’s go to lunch. I would say, BSC Best Cinemato ‘the light is so nice, I’ll come a TV Drama award graphy in for Normal People (season 1, back later’. I had the privilege episode 1), of meeting many of the famous DPs…and some who took great care of me, inviting me to their homes, teaching me. In England, I have some heroes. One of them is Duncan Brown. He is one of the few people I’ve ever met, who could see light. Many of us only see the reflection of light.” >> 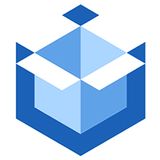